Who is paying the cost of India’s declining democracy? 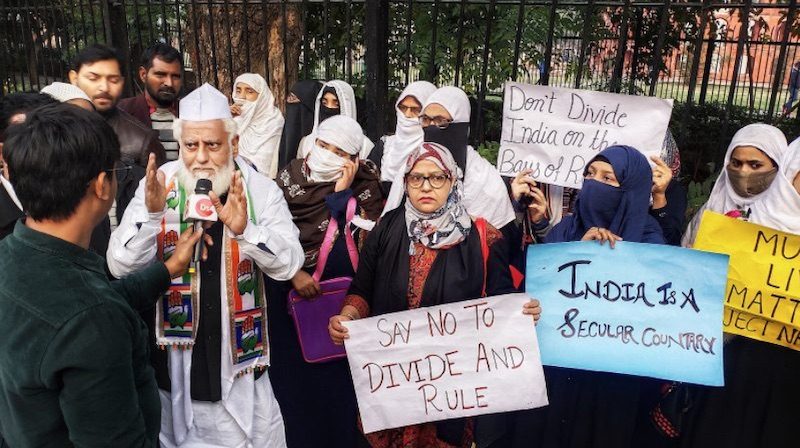 Locals in New Delhi protest against the Citizenship Amendment Act and the National Register of Citizens. Image via Wikipedia by DiplomatTesterMan. CC BY-SA 4.0

India is often called the world's largest democracy, a title it can certainly claim in terms of voters, as 900 million people are eligible to cast ballots. But a closer look at India's legal framework may cast doubts on the quality of this democracy, and whether or not the country is living up to this moniker.

While India did repeal its anti-sodomy law in 2018, a major victory for the rights of the LGBTQI+ community, in the following year, the Indian government brought about restrictive and discriminatory changes in citizenship and refugee laws; increased the disruption of internet services and downgraded the legal status of Kashmir and Jammu.

All of the legal changes mentioned above have happened in the past two years as the government led by Prime Minister Narendra Modi continues to openly favour Hindu nationalism ideology and attempts to impose this ideology as a national discourse for all Indians. This is most clearly reflected in the enactment of the Citizenship Amendment Act (Bill) passed in December 2019 that bans Muslims in neighbouring countries from the right to seek Indian citizenship. It also drives the proposed enactment of the National Register of Citizens (NRC) that aims at identifying and deporting non-documented residents in India, many of whom are Muslims.

Those moves have been met by large demonstrations across India, led mostly by students, leftist groups, Muslim communities, liberal intellectuals and women, while the political opposition seems to be largely weakened. More than 65 people have been killed in these protests across India, with over 175 people injured and over 3,000 arrested.

The Indian government has reacted with violence that has lead in some cases to deadly riots, as experienced in February 2020 in New Delhi. Over 53 people, mostly Muslims, ended up dead. Narendra Modi expressing his happiness to voters and the media. Photo by Aviral Mediratta. Copyright Demotix (17/5/2014)

Opposition to Modi's policies is also led by government officials who in certain states, are refusing to implement the CAA and NRC.

Besides India itself, the whole of South Asia is affected to various degrees by this erosion of democratic rule. Because of its size and centrality, India directly affects migration flows, cross-border trade and transportation, as well as political discourse in neighbouring Bangladesh and Pakistan, and to a lesser degree in Nepal and Sri Lanka. Bangladesh is particularly affected given the complicated history of migration between the two countries.

Finally, the internet has also been affected by the decisions being made by Modi’s government. In 2019, the largest democracy in the world has seen the highest number of internet blocks with a hundred monitored cases of shutdowns.

Find out more in the following stories:

Check out Global Voices’ special coverage of The Kashmiri People Versus the Indian State.