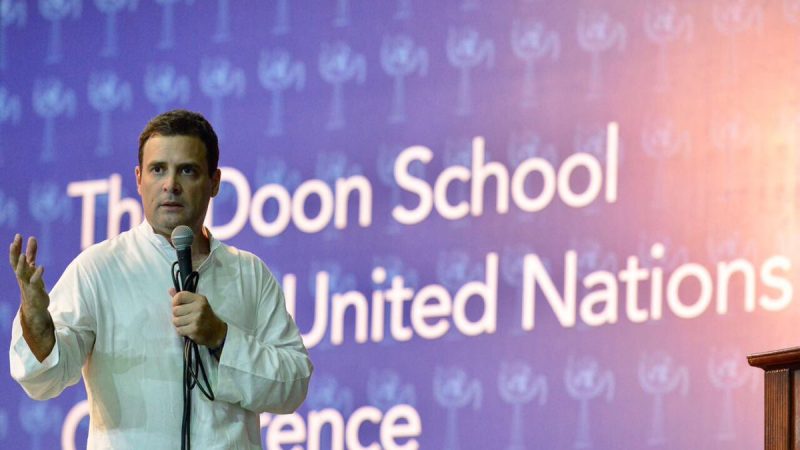 On 3 July 2019, India's opposition leader Rahul Gandhi announced his resignation as the president of the country's oldest party, Indian National Congress (INC), after losing the general elections earlier in May. Despite presenting a united front, as seen by the formation of the Mahagathbandhan (or Grand Alliance), the opposition saw right-wing Bharatiya Janata Party (BJP) candidate Narendra Modi reclaim his seat as Prime Minister in a landslide victory.

Gandhi's resignation has put the 134-year-old party Indian National Congress in a leadership crisis, and people from all across the political spectrum are weighing in on what this move could mean for the future of the party.

49-year-old Gandhi, also known as a ‘shy politician’ said his resignation was crucial for Congress’ future growth and took responsibility for losing elections.

It is an honour for me to serve the Congress Party, whose values and ideals have served as the lifeblood of our beautiful nation.

I owe the country and my organisation a debt of tremendous gratitude and love.

In a four-page statement released on Twitter, Gandhi said:

“I was born a Congressman, this party has always been with me and is my lifeblood and forever that way it shall remain. Rebuilding the party requires hard decisions and numerous people will have to be made accountable for the failure of 2019. It would be unjust to hold others accountable but ignore my own responsibility as President of the party.”

Experts claim that Gandhi, who is the great-grandson of India's first Prime Minister Jawaharlal Nehru, painted a grim picture of India's future in his letter, accusing Modi of ‘crushing the voice of Indian people’ by undermining democratic institutions and pulling apart India's secular fabric by spreading a violent form of Hindu Nationalism’.

Gandhi, often mocked by social media trolls and leaders of the ruling party, said he would continue to fight for the ideals of the INC and would be available for input or advice. He further said the left-liberal party needs to radically transform itself to fight the Modi-led BJP.

“Where they see differences, I see similarity. Where they see hatred, I see love. What they fear, I embrace,” Mr. Gandhi wrote. “The attack on our country and our cherished Constitution that is taking place is designed to destroy the fabric of our nation.”

India's general elections in 2019, known as the largest democratic process in the world, saw Modi use nationalism and security as a plank to fight against Gandhi's economic promises for socially marginalized communities. The terror attack in Indian-administered Kashmir followed by Modi's much-televised attack on Balakot in Pakistan helped BJP decimate the INC party at the ballot box.

Read This: All you need to know about India's 2019 general elections

In the past years, instances of crimes against Muslims and Dalits have increased. Many Muslim men have been lynched for either beef consumption or over rumors. While Modi has condemned a few incidents, other instances have been ignored or the accused have been supported by party members from Modi's BJP.

Gandhi initially offered to resign on May 25, 2019, after losing his seat in Amethi and after the INC failed to muster 10 percent of the minimum seats required to lead the opposition. In contrast, Modi's BJP won 303 seats cementing its position as a political behemoth in the Indian political sphere.

As a protest to Gandhi's resignation, 130 Congress leaders resigned in solidarity a few days ago. Many on social media were divided over Gandhi's decision and India Today launched a live blog to curate all the reactions to his resignation.

This brought tears. This is the beginning of an end. Goodbye Rahul. Goodbye Congress. Goodbye Nehru. Goodbye the nation I was born in. ??

Request @RahulGandhi to submit his four-page resignation letter to JNU as a PhD dissertation. I am quite sure it would be accepted and the degree awarded. The university has lately accepted worse.

Nothing would please me more than to see a Dr. in front of his name.

A moral human being in a violently immoral world mostly stands alone. @RahulGandhi‘s resignation letter is a critique of power that our fascist State, institutions & media will obfuscate. India has no hope until it internalises the message of RG's letter.https://t.co/qEiJ5cC4cX

Good that @RahulGandhi remained consistent about the resignation but without elections to the CWC, whoever it picks next will be a figure head rendering the process of change absolutely meaningless https://t.co/3TcMyISBbi

Congress President @RahulGandhi’s statement on his resignation has touched an emotional chord of millions of Congress workers across the country. The CWC and all senior Congress leaders and workers had wished that he continued. #RahulGandhi

Sir Your resignation letter is the biggest slap on BJP as well the congress person who acted just in self saviour rather then the party, the country

Proud of you sir ?

The party now stands at a cross-road. Only time will tell who will steer this once influential Indian political party towards the future.