The cycle of poverty for migrant workers worsens under lockdown 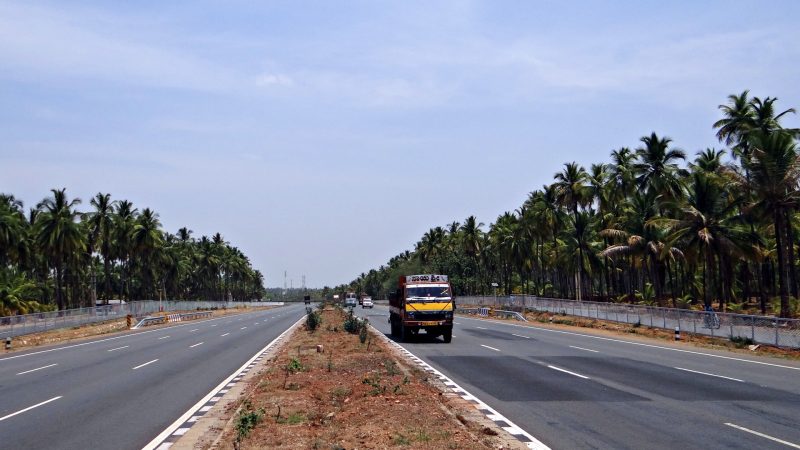 A highway in Karnataka, India. Image via Pxfuel.com. Used under a Creative Commons Zero – CC0 license.

There is an eerie silence on the streets of Delhi as India's usually bustling capital remains under lockdown. Since March 24, businesses have shut down, construction sites have been abandoned and housing societies have closed their gates to everyone but residents.

COVID-19 has ground the country to a halt creating more uncertainty for the already vulnerable population of domestic migrant workers and their families.

.@VijaytaL and I walked down the Yamuna in Delhi and found hundreds and hundreds of migrant workers lying abandoned and hungry.

No food served for two days, they say.

This, 10 km from the offices of India’s prime minister and Delhi’s chief minister https://t.co/eE0p0FuhmU

The construction industry, manufacturing, trade, transport, and hospitality sectors are major employers of migrant workers. Many also work as domestic helpers, handymen and street vendors. These workers usually end up in the informal economy, earning $2 on a good day.

Post COVID-19, their situation has worsened. Devoid of homes and food, many of them have been forced to take shelter in government-run relief camps. Kerala, so far, has the largest number of government-run relief camps for migrant workers (15,541 out of the 22,567 across India), followed by Uttar Pradesh (2230), Maharashtra (1135) and Tamil Nadu (175). Apart from the existing camps, the government has given orders to set up additional relief camps to prevent the mass exodus of migrant workers from cities to villages. However, camps and government shelters are just interim solutions.

In an interview with Global Voices, Aarti, who lives in one of the housing societies in Delhi, shared that her 46-year-old house helper, Shaila, a migrant from Kolkata, has called her twice to know if she can resume work. Unfortunately, domestic helpers are no longer allowed inside the housing society.

Shaila’s story is echoed in the stories of many of the 45 million migrant workers in different parts of India. Living far from their homes, migrant workers find themselves between a rock and a hard place, with no work and no option to return to their villages. Uttar Pradesh remains the only state that has arranged for transportation to Delhi for migrant workers to be taken home.  However, the fear that returning migrants would spread the virus further has led the central government to take a more stringent view on interstate travel, leaving a large number of workers stranded in various parts of India. A Public Interest Litigation (PIL) has been filed by Jagdeesh S. Chokkar, former Director of the Indian Institute of Management Ahmedabad, to allow the workers to return home.

UP is allowed to send 300 buses to Kota to carry UP students in Kota back amid lockdown. Gujarat is allowed to carry 800 pilgrims stranded in Hardwar back to Guj during lockdown. But migrant workers stranded w/o jobs, money&food are not allowed to go back!https://t.co/WZV4a8JRI2

The Indian government has unveiled a 23 billion US$ economic stimulus plan which would cover around 800 million people over the next three months. The package entails 5kg of wheat or rice per person every month, a gas cylinder per month for poor families, and some cash subsidies; however, these will likely not reach many migrant workers who are far from their registered addresses. In addition, over 100 million people are possibly excluded from enrollment in the public distribution system (PDS) because the state-wide numbers of eligible persons for subsidised foodgrains have not been updated to reflect population increase. Under the National Food Security Act (NFSA), the per-state allocation is still being calculated on the 2011 census figures.

The #lockdown has caused a serious crisis in the lives of #migrantworkers. While the govt has announced some relief measures for migrant workers, they have not yet reached the public due to deficits in their implementation. #COVID

Tune in to our ep to know more. @ayesha_minhaz https://t.co/HQ08jpwywg

Neeta Lal at The Diplomat criticises the government's response to the crisis and explains why many migrant workers are going home:

Social distancing doesn’t work without social security. And as state governments and urban municipal bodies have evidently failed to take care of them, going back to their villages, even on foot, is their only option.

It took him seven days to cycle nearly 1,700km, roughly 242 kms a day.
“I was sure that I would meet ghosts,” he said. “I did not see a single one.”
Quite a story this, by ⁦@debabrata2008⁩ and Rudraneil Sengupta. #lockdown #migrantworkers #India https://t.co/cVyPBvUeQY

Data from the Center for Monitoring Indian Economy (CMIE) has already revealed a large rise in unemployment — from 8.4 percent on March 22 to 23.4 percent on April 5.

Even though no one can say with absolute certainty what the current pandemic will spell for the Indian economy, the present conjecture points to a world where the future for migrant workers looks grimmer by the day.