Despite calls to move, a women-led protest in India challenges the Citizenship Amendment Act

"Shaheen Bagh is much more than just a protest site" 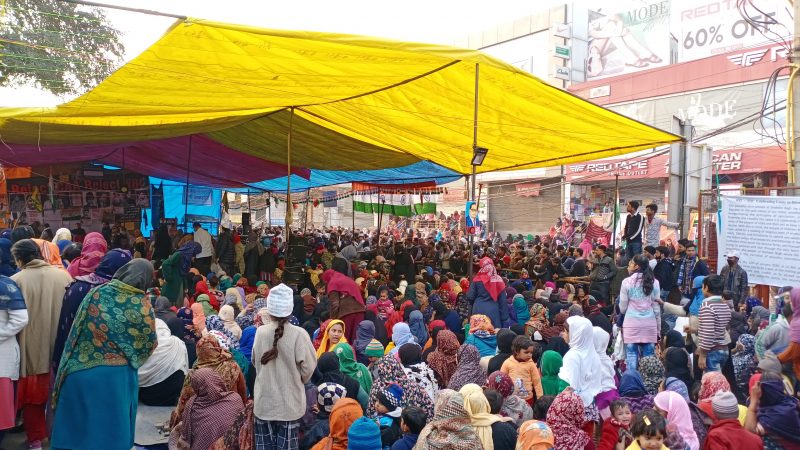 A women-led protest in the Shaheen Bagh neighbourhood of New Dehli, India has caught the imagination of the nation and the attention of the government. What began with a handful of Muslim women protesting against the National Register of Citizens (NRC) and Citizenship (Amendment) Act (CAA) on 15 December 2019, soon converted into a round the clock protest with several locals and other activist groups joining in.

After complaints were filed against the protesters for causing traffic jams, the Supreme Court of India appointed mediators to negotiate moving the protest venue on 17 February. However, the women from Shaheen Bagh are not in the mood to give in and have instead asked the public, “If we can sacrifice so much for this protest, can’t people tolerate a slight inconvenience?”

What is the Shaheen Bagh Protest?

On 12 December 2019, the Citizenship (Amendment) Act (CAA) was enacted into law. The CAA offers citizenship rights to refugees and immigrants from neighbouring countries who belong to specific religious communities; however, this list excludes Muslims. The CAA, combined with a proposed update to the National Register of Citizens (NRC) which mandates proof of ancestry with documents like birth certificates, is thought to be disastrous for the minority Muslim community. If a Muslim is unable to prove their citizenship, which may be complicated due to poor documentation infrastructure, many fear they will lose citizenship and, unlike other religious minorities, will not have a legal pathway to stay in the country.

Fueled by fears that they would lose their homes and their citizenship because of these new measures, the Shaheen Bagh protest soon became a platform for expressing discontentment over the other issues plaguing the country. Unemployment, poverty, corruption and disenchantment with the current government are a few themes that have featured strongly in these protests. 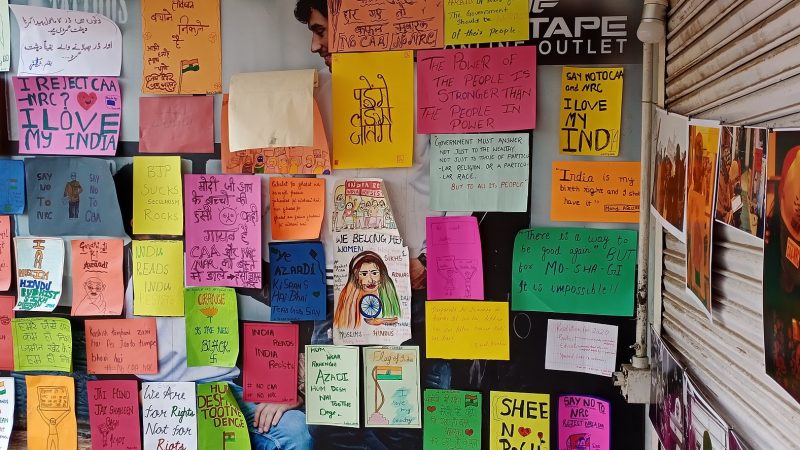 Posters and artwork on a closed storefront. Image by DiplomatTesterMan via Wikimedia commons. CC 0

The women protesting at Shaheen Bagh have been steadfast in their determination and have refused to leave the venue. The protests have inspired similarly fashioned movements in other parts of the country, as concerned citizens showed solidarity with their counterparts in Delhi. Pune, Bangalore, Ludhiana, Prayag Raj and several other places in India have become centers for new protests.

So far, the protesters have garnered support and also ridicule from factions within the ruling party who have maintained that the CAA will not harm the interests of minorities.

Dilip Ghosh, West Bengal BJP Chief on Delhi's Shaheen Bagh protest: During demonetisation, a lot was said about people dying in queues. Now,when women are sitting with children where the temperature is 4-5 degrees celsius, nobody is dying. What amrit (nectar) did they take?(28.1) pic.twitter.com/RN7UaNsYRN

However, some people have come out openly in support of the women of Shaheen Bagh.

This Is Humanity & This Mass Revolution Is Against Every Machinery That Goes Against Humanity !

Shaheen Bagh Stand For Every Indian !

The current ruling by the Supreme court to move the Shaheen Bagh protest is a result of petitions filed due to traffic hold-ups near the site of the protest. While the Supreme Court has upheld the right of citizens to protest peacefully, it has also made it clear that the right to protest cannot cause prolonged public inconvenience. The Times of India has a live blog updating the mediation efforts.

“The HM says he won’t move an inch back on CAA.
We also won’t harm a hair on anyone’s head,
but we won’t move until the law is removed”

“Hamne Angrezon ko bhagaya tha, tum kya cheez ho?”
(We chased the British away, what are you)” pic.twitter.com/X3TFawa3pA

The Supreme Court has granted the women of #ShaheenBagh their right to protest, but has asked them to stop blocking traffic.

But, Shaheen Bagh is much more than just a protest site or a traffic jam

The mediators are slated to complete the negotiations and submit a report to the Apex Court by 24 February 2020.

Whether the protesters are forced to move is yet to be seen, however, the women of Shaheen Bagh have claimed a space in the annals of India's protest history.

Check out Global Voices’ special coverage page “Who is paying the cost of India’s declining democracy?“