In Modi’s India, anti-Bangladeshi-immigrant rhetoric is used to justify changes in citizenship laws

"The anti-illegal-Bangladeshi-immigrant chorus has gripped India" 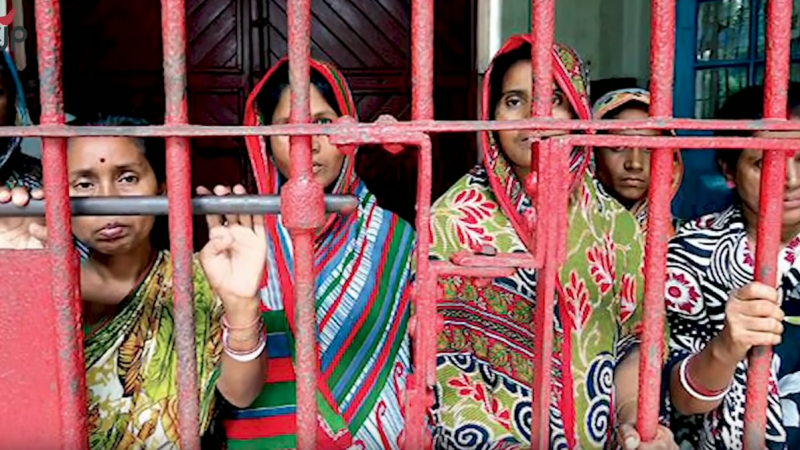 Women locked up in Assam in a detention center for illegal immigrants. Screenshot from YouTube Video by Md. Sajid/CJP.

In December 2019, India amended it's Citizenship Act 1955 allowing Hindu, Sikh, Buddhist, Jain, Parsi and Christian refugees and immigrants from neighbouring Afghanistan, Bangladesh and Pakistan to be eligible for requesting Indian citizenship. This act has drawn criticism from civil society organizations and the opposition for unfairly excluding Muslims from the list. It has also put the relationship between India and Bangladesh, two neighbouring countries on stress.

The exercise of updating the National Register of Citizens (NRC), a government register containing the names and relevant information for the identification of all Indian citizens, which has been piloted in the Indian State of Assam in the Northeast of the country, has left 1.9 million Indians, including 1.3 million Hindus, facing the possibility of becoming stateless. The state has a large Bengali population, who are also predominantly Muslim and are commonly labelled as Bangladeshi migrants.

Many top ruling party leaders, including Home Minister Amit Shah, have proposed that the NRC should be implemented across India. As the Citizenship Amendment Act (CAA) provides recourse to people of other religions, Muslims fear that they will end up in detention centres being built in Assam and other states.

The debate on the Citizenship Amendment Act (CAA) and the National Register of Citizens (NRC) has divided opinions in India and hundreds of thousands of people have started protests across the country against both laws. So far at least 27 people have been killed and many injured, while a few thousands have been arrested. 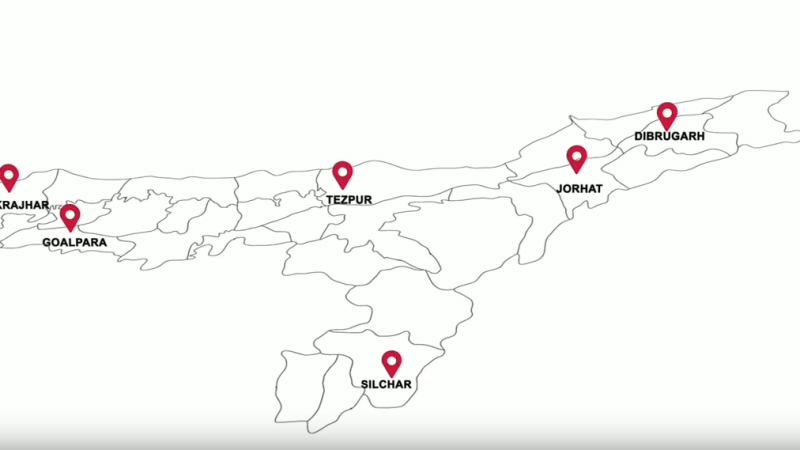 Six detention camps for illegal immigrants are being built in Assam. Screenshot from YouTube Video by Md. Sajid/CJP.

The history of migration to India

After the 1947 partition of India on the basis of religion that affected nearly 15 million Hindus and Muslims, a mass migration took place as Bengali Hindus from Bangladesh moved to neighbouring Indian states, such as West Bengal and Assam, while Muslims from those places in India migrated to Bangladesh. Even though there is no accurate information available, the Indian government estimates suggest that around 2.6 million migrants left what was then called East Pakistan (and is now Bangladesh) for India, and 0.7 million migrants came to East Pakistan from India.

A second major wave of migration took place during the Bangladesh liberation war with West Pakistan in 1971, when an estimated 10 million people fled Bangladesh, and took refuge in India, particularly in the Indian states of West Bengal and Assam. Most of these refugees went back to Bangladesh after it was liberated on 16 December 1971, but common estimates suggest about 1.5 million people stayed back in India in different states. These people (Muslims and Hindus) have gradually become assimilated in Indian society, and many of them have obtained papers such as ration cards, voter IDs, and have given birth to children on Indian soil.

The Census of India 2001 Report on migration shows that about 6 million persons who live in India were born in other Asian countries, out of which 3.7 million were originally from Bangladesh. The 2011 India Census data, released in 2019 under Modi's government, shows that the total number of Bangladeshi immigrants fell from 3.7 million in 2001 to 2.7 million based on birthplace data. The overall number of immigrants also fell from 6 million to 4 million.

India is not being overrun by immigrants; an excellent, fact-filled piece by a leading scholar of the subject: https://t.co/5u550TXtAc

If the trend continues, the numbers will shrink, as the result of assimilation and naturalization. According to the Indian citizenship laws there are a number of avenues to get Indian citizenship for migrants, including by birth (if born before 1st July 1987 – irrespective of the nationality of one's parents), by descent and by naturalisation (if a legal resident in India for 12 years).

The rhetoric about illegal Bangladeshis

Widespread stereotyping and hate speech about Bangladeshi immigrants take place regularly across India, an issue that has been widely politicized and instrumentalized.

Chinmay Tumbe at LiveMint writes about the political rhetorics about illegal Bangladeshis:

[..] The anti-illegal-Bangladeshi-immigrant chorus has gripped India, with a figure of “20 million” making the rounds for more than a decade. It was a number stated by the government in the Rajya Sabha in 2016 in response to a question. It is a number circulating on social media. It is also a number without a methodology.

A Bengali blog from West Bengal in India – Panchforon writes on the NRC that the Indian government also proposes to implement in the state of West Bengal:

Are there really 20 million illegal Bangladeshis in West Bengal? No, it's a rumour spread by Bharatiya Janata Party (BJP).

During the 1970s, 1980s and 1990s, migration from Bangladesh to India took place mostly for economic reasons linked to natural disasters, such as the 1974 famine, or the floods of 1988 which drowned almost 60 per cent of total land area in Bangladesh, damaging the livelihoods of millions and rendering thousands homeless. Thousands of people are believed to have then migrated to India through the unsecured porous borders. But they came back whenever floods receded so that they could go back to their ancestral homes and access agricultural lands.

There were a number of notable persecutions of Hindus in Bangladesh during the 1990s mainly by the Islamists and nationalists, which resulted in the migration of hundreds of Hindu families to India. However, in the last decade, incidents against the Hindus have gone down and the government has vowed to protect minorities, including Hindus who constitute more than 10 per cent of the population.

India has long tried to prevent illegal migrations from Bangladesh. In the 1990s it made several moves, such as operation pushback to identify and deport Bangladeshis without documentation living in different Indian states. India has a 4,096 km-long border with Bangladesh and has been spending US$ 155 million since 2009 to erect high barbed-wire fences – 68 per cent of it has been completed in 2019. The Indian Border Security Force (BSF) had been known for its shoot on site policy for Bangladeshis trying to enter India illegally. More than a thousand people have died in the past two decades due to BSF shootings.

In the past three decades, Bangladeshis are increasingly migrating to the Middle East, Malaysia, the Maldives and Europe for work or other reasons. And Bangladesh's transformation in development indicators and progress towards a middle-income country has reduced the need to move to India as pointed out by Bangladesh Home Minister Asaduzzaman Khan in an interview:

Why will people from Bangladesh illegally migrate to India? All I can say is that before the Liberation War some Hindus migrated to India but no Muslims went to India illegally after 1971. Bangladesh is not a poor country that people will migrate illegally to India. Our economic growth was 8.15 per cent in fiscal 2018-19. Our current Gross Domestic Product (GDP) growth is 8.13 per cent and our per capita income stood at 2000 US$. You tell me, why someone from Bangladesh would illegally go to India when the living standard in Bangladesh is better?

Bangladesh will take back Bangladeshis stuck in India

According to independent journalist Ranjit Bhushan, the question of `deporting’ illegal Bangladeshi citizens from India exists mainly in theory, as there is no existing extradition treaty between both countries.

The Bangladeshi government, through its Foreign Minister AK Abdul Momen, has stated that the Citizenship Amendment Act (CAA) and National Register of Citizens (NRC) are India’s internal matters, while seeking assurance from India that it won’t send people across the border arbitrarily, according to reports. However, Bangladesh said that it will take back any Bangladeshi citizen staying in India illegally given there is proof of their citizenship.

Mr. Momen has also noted that trends have reversed, as some Indian nationals are entering Bangladesh illegally for economic reasons. Bangladesh is already hosting more than 1.3 million Rohingya refugees.

Analysts predict that despite official statements, people may leave India in the face of fear of the NRC implementation and try to enter Bangladesh. A new influx of refugees would create more problems for Bangladesh.