‘Delhi is burning': 17 dead and hundreds injured in clashes over anti-citizenship law protests

The Chief Minister appealed to all Delhites to maintain peace 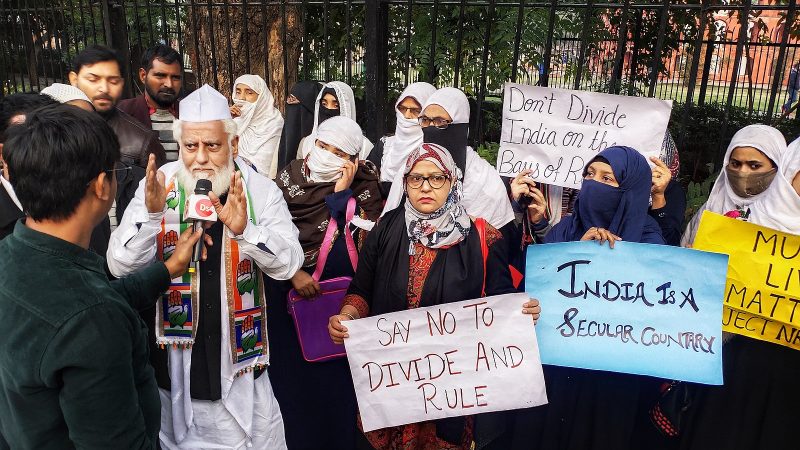 Locals in New Delhi protest against the Citizenship Amendment Act and the National Register of Citizens. Image via Wikipedia by DoiplomatTesterMan. CC BY-SA 4.0

In the northeastern district of India's capital, violent clashes between protesters from opposite sides of the citizenship law debate came to a violent head starting 23 February 2020. The situation is ongoing and has since turned into a riot. The disputes coincided with US President Donald Trump's visit to the country and has led to the deaths of at least 17 Muslim and Hindu civilians — including a policeman. Over 150 people have been injured, many from gunshot wounds which protesters claim came from pro-CAA protesters. Five metro stations and some schools remain closed in North East Delhi. Protests against the Citizenship Amendment Act (CAA) have been ongoing, both nationally and internationally, since December 2019.

From Shaheen Bagh to Jaffrabad

On 22 February, around 200 women gathered near the Jaffrabad metro station in North East Delhi and started a sit-in protest against the National Register of Citizens (NRC) and the Citizenship (Amendment) Act (CAA). The protesters blocked the entry of the metro station as well as an adjacent road, a move that has been likened to the ongoing peaceful Shaheen Bagh protests in another part of Delhi. The women at Jaffrabad carried national flags and shouted “Azaadi (freedom) from CAA, NRC” slogans in front of the police.

Entry & exit of Jaffrabad have been closed. Trains will not be halting at this station.

Read more: Despite calls to move, a women-led protest in India challenges the Citizenship Amendment Act

The crowd grew larger on 23 February when an opposing rally in support of the new citizenship law was led by Kapil Mishra, a local leader of the ruling Bharatiya Janata Party (BJP). Reportedly, Misra gave an “ultimatum” to the Delhi police to clear the roads blocked by the protesters.

A ruling party leader flanked by a senior police official issues an open warning. No one has acted against him -neither the police or his party. 24 hours later, violence in east Delhi spirals, the police seem adrift. #chronology https://t.co/dEYS9zMSjf

The clashes ensued as anti-CAA protestors were beaten up and both groups began throwing stones at one another. Police used tear gas to bring the clashes under control.

However, clashes continued the following day as new incidents of violence were reported from nearby Muslim-populated areas.

VIDEO : #Chandbagh
Delhi is burning, this is what the goverment wanted.

Delhi is made into war zone by Rightwingers!

#DelhiViolence | Hindu mobs are throwing petrol bombs across the road at Muslim houses in Kabir Nagar.

Journalist Vijayta Lalwani recounts the scene of violence in an article at First Post:

As a shop was set ablaze in Delhi’s Maujpur area on Monday afternoon, a middle-aged man with a saffron tikka on his forehead repeatedly asked reporters to stop filming the arson. “Bade dinon ke baad Hindu jaaga hai,” he said. “Hindus have woken up after long.” He did not want to identify himself, other than as a supporter of the Citizenship Amendment Act. [..]

“Five police officials were filling stones in a battery rickshaw and sending it there [towards Maujpur Chowk],” said Kazim, a 30-year-old resident of Jaffrabad. “This is a conspiracy.” He alleged the police were on the side of the CAA supporters and were arming them for a future clash.

Srishti Srivastava at The Wire.in interviewed a pro-CAA/NRC protester who admitted burning a mausoleum:

On 25 February, Al Jazeera reported that a mosque had been vandalized. Shops and vehicles including a fire truck were also torched in Jaffrabad and Maujpur.

Very volatile in Yamuna Vihar. We’ve seen mobs of men carrying sticks and stones. There’s been arson. We were being stopped from filming. You can someone yelling that at the end of video. #DelhiBurning #DelhiViolence pic.twitter.com/5QrRnsieM5

A Gurdwara has given shelter to Muslim families fleeing Hindutva mob in NE Delhi.

(Not giving exact location as it may endanger Sikhs as well. Will inform over DM if people may need to go there)#DelhiBurning

The Chief Minister of Delhi Arvind Kejriwal condemned the violence and appealed to local members of the legislative assembly and the people to hold the peace. He also mentioned that there is a severe shortage of police in Delhi to tackle the violence.

Look at ‘em. How old they could be? The seeds of communalism & hatred sown by Hindutva terrorists, took them out on the streets with bludgeons! This brain-dead generation will decide who will rule our nation! Detox them, get them back, else we're doomed forever #DelhiBurning pic.twitter.com/PEJuejqHWZ

This is the most horrific video I have seen today. It's worse than actual murder when the ruling party's elected MLA is asking people to shoot in the middle of a riot.
Yes this is @BJP4India MLA abhay verma from Laxmi Nagar#DelhiBurning https://t.co/zyirEB503T

Sadly there is no happiness in the streets outside, as the CentralGovt condones violence unleashed by its own supporters, & the StateGovt wrings its hands helplessly, claiming that cheap water& electricity are more important than lives, principles or social harmony. #DelhiBurning https://t.co/9eevU7IJ6Y

First Post and The Times Of India are live updating news about the protests.

Read our special coverage Who is paying the cost of India’s declining democracy? for more details on the protests against the citizenship laws in India.