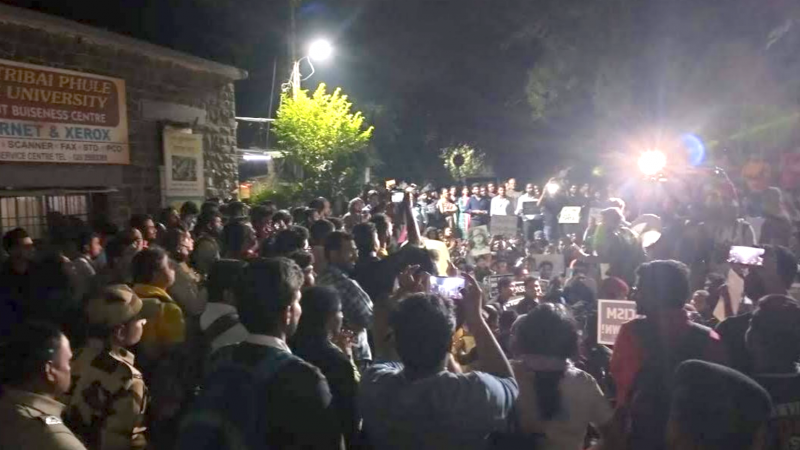 Students at Savitribai Phule University in Pune, India protest the Citizenship Amendment Act (CAA) and the police brutality against the students of Jamia Millia Islamia University in the presence of police and university guards. Image by an anonymous activist. Used with permission.

After passing the Rajya Sabha (Upper House) with a vote of 125-105, the Citizenship Amendment Bill (CAB) was then signed by Indian President Ram Nath Kovind and became known as the Citizenship Amendment Act (CAA) on 12 December 2019. The act, which provides a path to citizenship for non-Muslim immigrants from the neighbouring countries of Pakistan, Bangladesh and Afghanistan, has drawn criticism from civil society organizations and the opposition for unfairly excluding Muslims.

Since its introduction in the Lok Sabha (Lower House) on 9 December 2019, protests have erupted across the country, most notably in the northeastern states of Assam, Tripura and Meghalaya.

The protests soon spilled over into the capital, Delhi. The student-driven protests in the capital began peacefully on 15 December 2019 at Delhi's Jamia Millia Islamia University; however, things took a violent turn when stones were thrown and two passenger buses and some motorcycles were set ablaze near the university. The culprits behind these acts of vandalism are still not officially known but that evening, 300 members of the paramilitary forces and Delhi police in riot gear stormed the campus, the libraries and the mosque.

Read This: Internet blocked as protests intensify in northeast India against the Citizenship Amendment Act

According to a statement by the university’s Chief Proctor, the policemen did not have prior permission to enter the premises and instead entered by force. The Delhi Police used tear gas and batons charges leading students to denounce severe police brutality. About 200 students were injured and 100 were detained at police stations.

As many as 17 metro stations remained shut in Delhi following the unrest. Many secondary schools and colleges in South Delhi remained closed on 16 December 2019.

As the students turned to social media for help, there were growing concerns about a network shutdown being imposed. Videos and photographs of the incident started to float around on Instagram. People started to post about what was happening in order to spread awareness.

Spoke with a student inside Jamia who sent me this video along with other videos. He claimed that the students were stuck inside library with the library filled with tear gas smoke and they were having a difficult time breathing. And that some could finally get out of there. pic.twitter.com/1XaD9jPrdt

Protests outside @DelhiPolice headquarters at ITO in Delhi to demand withdrawal of police personnel from Jamia campus and stop the violence against students. #JamiaProtestsCAB pic.twitter.com/SzTbBaLz6M

Who is better? #JamiaMilliaIslamia protest against #CitizenAmendmentBill in New Delhi #PhotoJournalism 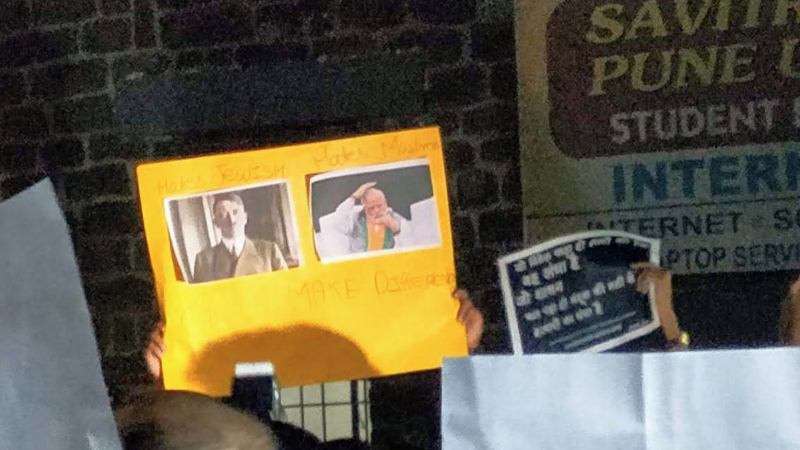 There was also growing demand for celebrities to take a stand against police brutality. Protests were held across the country at a number of other universities in solidarity with the Jamia Millia Islamia students.

Students of Pondicherry University, IISC- Bangalore, Jadavpur University (Kolkata) and many more will protest today in their campus in solidarity with students of Jamia Millia Islamia, Delhi.

The Jamia Millia Islamia University students left campus the next day after all those who were detained were released. The campus has reportedly been destroyed and students described it as a war zone.

The students disassociated themselves from the violence and police also denied using rubber bullets against the students. As per the Deputy Commissioner of Police of Delhi, the police were forced to use tear gas after stones were thrown at them from inside the university, buses were torched and policemen were injured. As the debate gained traction on social media, people started to take sides with some standing in solidarity with the actions of the police.

According to a report by News18, the police have confirmed that the students did not initiate violence during their protest. In a press conference, the Public Relations Officer of Delhi Police assured that accountability for the incident would be decided through a thorough investigation by the Crime Branch.

Meanwhile, police have also used tear gas and baton-charges on protesters elsewhere in the country.

Protests and marches are set to continue across the country in order to demand accountability for the police brutality against the Jamia Millia Islamia University students as well as a retraction of the Citizenship Amendment Act.