'The citizenship law will endanger the constitution and destroy peace' 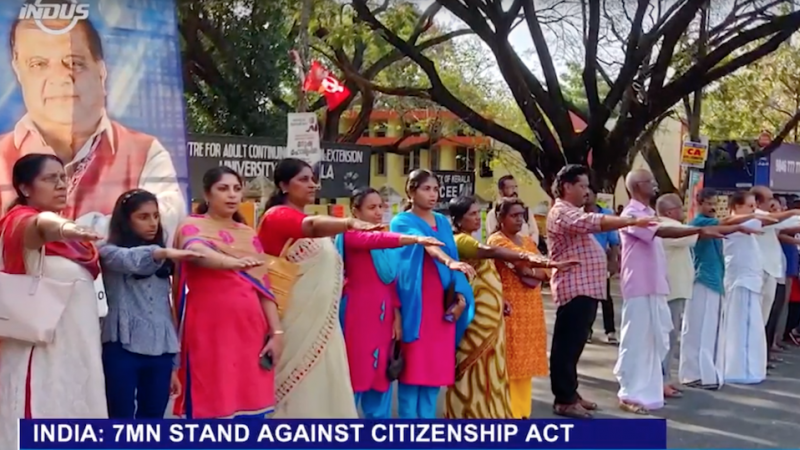 Human Chain in Kerala. Screenshot from YouTube Video by indusdotnews.

On 26 January, on the Republic Day of India, several millions of people formed a 620 km human chain from the north to the south of Kerala demanding the withdrawal of the controversial Citizenship Amendment Act (CAA).

The Citizenship Amendment Act 2019 (CAA), promulgated in December 2019, provides a path to citizenship for non-Muslim immigrants from the neighbouring countries of Pakistan, Bangladesh and Afghanistan. However, it has drawn criticism from civil society organizations and the opposition for unfairly excluding Muslims. The Citizenship Amendment Act, combined with the nationwide National Register of Citizens (NRC), is deemed to be disastrous, not only for the minority Muslims, but also all other Indians.

The human chain event was organised by Left Democratic Front (LDF), a coalition of left-wing political parties led by the Communist Party of India (Marxist) and its leader, the Chief Minister of Kerala Pinarayi Vijayan.

Another Human chain is going to be created by the Malayalis in Kerala on our Republic Day,2020.
This human chain will be 620 km long to show the protest against #CAA_NRC_NPR and other unconstitutional activities of Sanghis.
From Kasaragod to Thiruvananthapuram.#CAA_NRCProtests pic.twitter.com/Rb0MANTJXc

A view from the 620 km long human chain in Kerala to protest against the anti constitutional CAA, NRC & NPR and ‘Hum Dekhenge’ in Malayalam in the background.
Let our PM identity all these people by their dresses :)
pic.twitter.com/N9exiGsooa

The Chief Minister of Kerala Pinarayi Vijayan joined the protests and said in a statement:

The citizenship law will endanger the Constitution and destroy peace in the country since their (the ruling Bharatiya Janata Party’s) intention is to destroy secularism. We have already declared that Kerala is not the place to accept the new citizenship regime.

Kerala, in essence, is an argument for equality. The people of this land are unapologetically secular. The #KeralaHumanChain of today is yet another example for our unity. This battle, we will not rest and we shall overcome.#HumanChain pic.twitter.com/W3Hprr7E8t

Stand up in any way you can. It's necessary#NoCAANoNRC

From their Wedding to the 620 km human chain —-
formed in Kerala demanding withdrawal of CAA.#शाहीन_बाग_से_हिलती_सरकार pic.twitter.com/4rHfwRA3EA

The Kerala human chain was not allowed to break even in backwaters. Such is the devotion towards constitution. pic.twitter.com/TASApYuqIk

Thousands of people formed an 11km long human chain in Kolkata, the capital of the state of West Bengal on the same day.

#Kolkata . This human chain goes 11 kms to Golpark from Shyambazar Against NRC/CAA/NPR. pic.twitter.com/Yj40ArgKFd

Republic Day honours the date (26 January 1950) on which the Constitution of India came into effect and turned the nation into a newly formed republic. On this day, India saw protests across the country that accuse the CAA of being detrimental to a key component of the constitutional value system — envisioning a secular India.

?Lakhs in a Human Chain in Kerala

Anti-CAA-NRC movement grows bigger & bigger. Modi would be tired of seeing pics & identifying crores of people by their clothes ? pic.twitter.com/9wxWADKlW0