"CAB is example of BJP's deeply cynical and divisive politics" 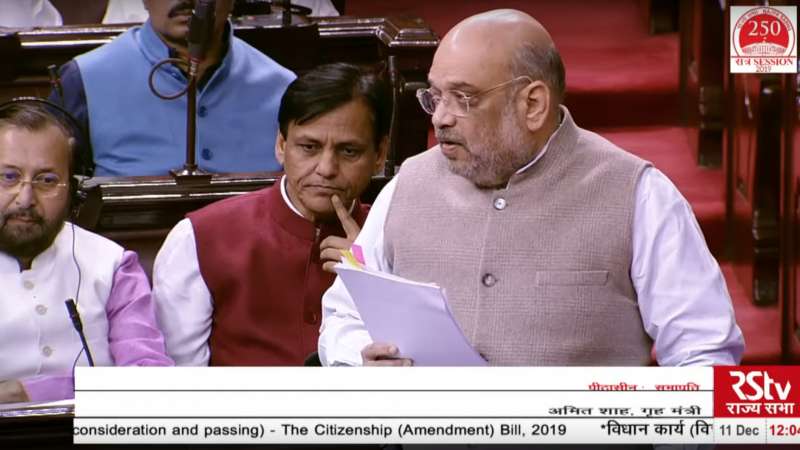 On 11 December 2019, the Rajya Sabha, India's upper house of Parliament, passed legislation by 125-99 votes that offered citizenship rights to refugees and immigrants from neighbouring countries Afghanistan, Pakistan, and Bangladesh. However, this move came with a caveat that is stoking paranoia throughout the country's 200 million Muslims and minorities — it will only allow non-Muslim immigrants to seek Indian citizenship.

Earlier this week, India's lower house of Parliament approved the bill which drew stark comparisons to Nazi Germany and Hitler from Indian Parliamentarians opposed to the bill.

Former opposition leader Rahul Gandhi tweeted that the bill was against the Indian Constitution's ethos of secularism:

The #CAB is an attack on the Indian constitution. Anyone who supports it is attacking and attempting to destroy the foundation of our nation.

“The Indian government is creating legal grounds to strip millions of Muslims of the fundamental right of equal access to citizenship.”

Reactions to the bill have been strong on social media. Pakistan's Prime Minister Imran Khan said:

We strongly condemn Indian Lok Sabha citizenship legislation which violates all norms of int human rights law & bilateral agreements with Pak. It is part of the RSS “Hindu Rashtra” design of expansionism propagated by the fascist Modi Govt. https://t.co/XkRdBiSp3G

Last night at midnight, India’s tryst with bigotry and narrow minded exclusion was confirmed as the CAB was passed in the Lok Sabha. Our forefathers gave their lifeblood for our freedom.

But, Modi, responsible for bifurcation of Jammu and Kashmir and internet shutdowns in the valley since August, tweeted in favor of the bill:

Delighted that the Lok Sabha has passed the Citizenship (Amendment) Bill, 2019 after a rich and extensive debate. I thank the various MPs and parties that supported the Bill. This Bill is in line with India’s centuries old ethos of assimilation and belief in humanitarian values.

The Citizen Amendment Bill (CAB) in its current form provides a pathway to citizenship for Hindus, Parsis, Jains, Buddhists, and Sikhs facing persecution in their home countries, but excludes Muslims. This has created fear among India's already marginalized Muslims about being pushed back as second-class citizens.

“They have no place to go except India. The beneficiaries of the bill can reside in any state of the country,” Home Minister Rajnath Singh told the Parliament on Monday, following a day-long debate.

Critics have pushed back against the amendment for discriminating against Muslims terming it unconstitutional. The law in its current form prevents illegal immigrants from seeking Indian citizenship. The amendment, meanwhile, allows immigrants adhering to six different religions except for Islam from seeking citizenship.

India's constitution, which was inspired by the U.S. Constitution, guarantees everyone equal rights regardless of their religion but the bill violated this fundamental right to equality, opposition leaders said in the Parliament on Monday.

Critics say the bill violates Article 14 of the Indian Constitution, which assures equality before law stating “the state shall not deny to any person equality before the law or equal protection of the laws within the territory of India.”

India has been and should be a sanctuary for any group of persecuted people, irrespective of their religion. It was always meant to be a haven for those seeking Justice, Liberty, Equality and Fraternity (literally, the very basis of our constitution!) #NoToCAB https://t.co/Xi4OLA56q9

Home Minister Amit Shah repeatedly announced rolling out a nationwide National Registry for Citizens and was responsible for advocating passage of the law in Parliament, leading the Foreign Affairs Committee of the United States and US Commission on International Religious Freedom to criticize the move and seek out sanctions against Shah calling the bill a ‘dangerous turn in the wrong direction that undermines most basic democratic tenet’.

In response, The Indian government said such an initiative should be welcomed and not criticized by those who are genuinely committed to religious freedom.

Meanwhile, the Assamese from India's North East are also protesting against the bill stating it would threaten the identity of local culture by legalizing Bangladeshi Hindu immigrants.

Ever since his re-election with a thumping majority in May this year, Modi has focused on executing the election issues he promised, including abrogating article 370 which ensured Kashmir's autonomy. From the internet to schools, hospitals to transport, Kashmir (India's only Muslim majority former state and now a union territory) has been under lockdown and thousands of soldiers patrol its streets and protests are silenced with violence.

Another shot in the arm for Modi was the Supreme Court verdict that critics say favoured Hindus over Muslims in the infamous 1993 Babri Masjid demolition case.

The bill, popularly known as CAB has also excluded other minorities escaping religious/political persecution including Tibetans, Tamils, and Rohingyas.

“The CAB is another example of BJP's deeply cynical and divisive politics. It makes a mockery of India's constitution.”

Earlier this year, India's government declared 1.9 million people stateless after a citizens registry audit, mostly Muslims, forcing them into detention camps. Modi, under whose tenure, India's economy has fallen to 4.5 percent from 7 percent a year earlier has focused on ‘influx immigrants’ narrative after failed economic decisions stymied Asia's third-largest economy into a slowdown.

Modi and Shah have announced replicating the citizen's registry nationwide with a focus on removing ‘infiltrators’ by 2024 when India is ready for another general election.

Shah also said the bill would not be necessary if Congress had not consented to partition of India on the basis of religion. But, the argument, which many parliamentarians used in the upper house is flawed as all founders of a democratic India wanted a secular India with equal protection to all citizens.

Human rights activist Harsh Mander called for a countrywide protest against the bill:

If CAB is passed, this is my civil disobedience:
I will officially register Muslim. I will then refuse to submit any documents to NRC. I will finally demand the same punishment as any undocumented Muslim- detention centre & withdrawn citizenship.
Join this civil disobedience