An Indian paramilitary soldier stands alert in Srinagar after curfew was imposed in parts of Kashmir valley. Image published on May 25, 2019. Via Instagram account of Ieshan Wani. Used with permission.

On August 5, the government of India, led by the Bharatiya Janata Party (BJP), revoked Article 370 of the Indian constitution that provided special autonomy status since 1950 to the disputed state of Jammu and Kashmir, in the northwest corner of the country.

Jammu, Kashmir, and Ladakh are now separate territorial units. Fearing unrest, the Indian authorities placed hundreds of political leaders and their aides under house arrest, as well as suspended access to mobile, landline, and internet networks. Roadblocks were put on the streets and restrictions on almost all movement are being strictly enforced.

On August 5, Srinagar, the main city in Jammu and Kashmir, went under complete lockdown and at least 2,300 people, mostly young men, were detained.

With the communication blackout, netizens resorted to Twitter — which prompted the Indian government to request the suspension of certain accounts it accused of spreading “false news”.

Although authorities have been slowly easing restrictions, students stayed away from schools in the initial days. The authorities ordered the institutions to reopen au August 28. Meanwhile, communications are being gradually restored in certain places. 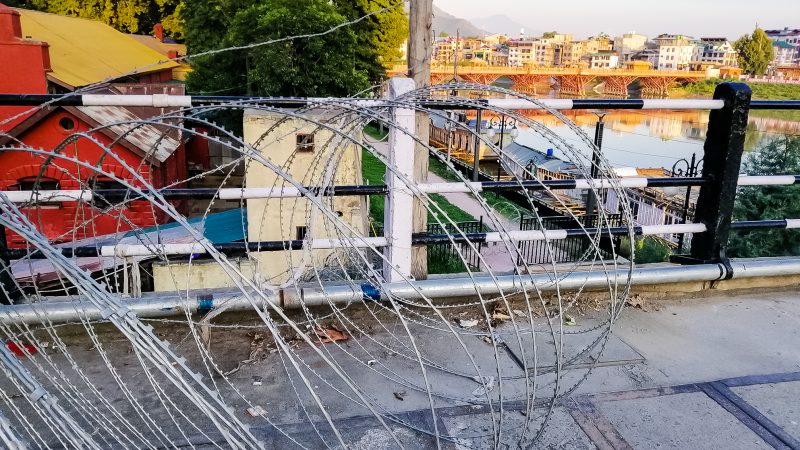 Birbed-wire in front of government houses and bridges. Image by Fatima Jahan. Used with permission.

Although the Indian government has insisted the region is slowly returning to normalcy, a report released recently by Indian activists criticizes the “occupation” of Kashmir and urges the government to “return democracy to the region”.

India and Pakistan both claim the disputed territory of Kashmir in its entirety. While India controls one part, which it calls Jammu and Kashmir, Pakistan controls another part named Azad Kashmir. Besides, China currently administers Aksai Chin, a small part of the Ladakh region which India claims as part of Kashmir.

Jammu and Kashmir have a predominantly Muslim population. Since 1989, the region is in a state of insurgency and has experienced countless protests, some calling for independence or Azadi. In the past 27 years, more than 70,000 Kashmiris have been killed and many more have been injured or arrested in Indian military crackdowns.

Read our special coverage: The Kashmiri People Versus the Indian State

Thousands of Pakistanis strongly reacted to the scrapping of Article 370 with protests across the country. The Pakistani government voiced its disapproval of India's actions and quickly responded with a series of actions to show support for Kashmiris

The Pakistan Electronic Media Regulatory Authority (PEMRA) also issued a letter dated 14 August 2019 announcing a ban on advertisements featuring Indian artists, or produced in India as part of the country's new policy towards its neighbour. 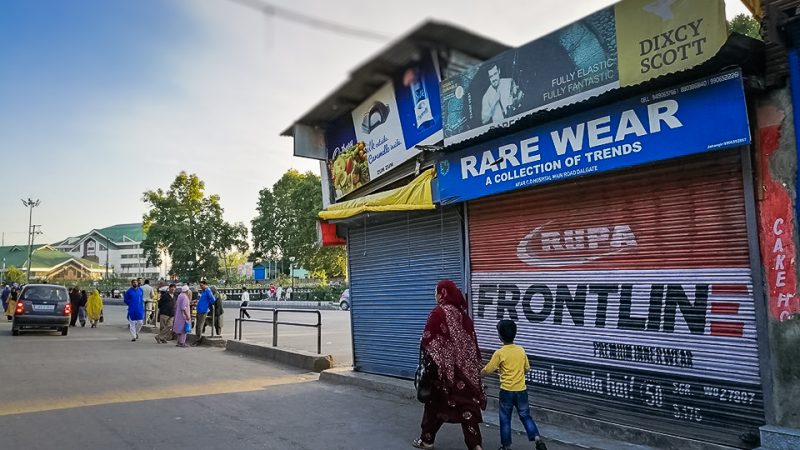 Shops are closed. Image by Fatima Jahan. Used with permission.

* Insights into Kashmir's crisis from a Kashmiri born in Nepal (November 23, 2019)

* Reading Kashmir: Understanding the conflict through its fiction and memoirs (September 8, 2019)