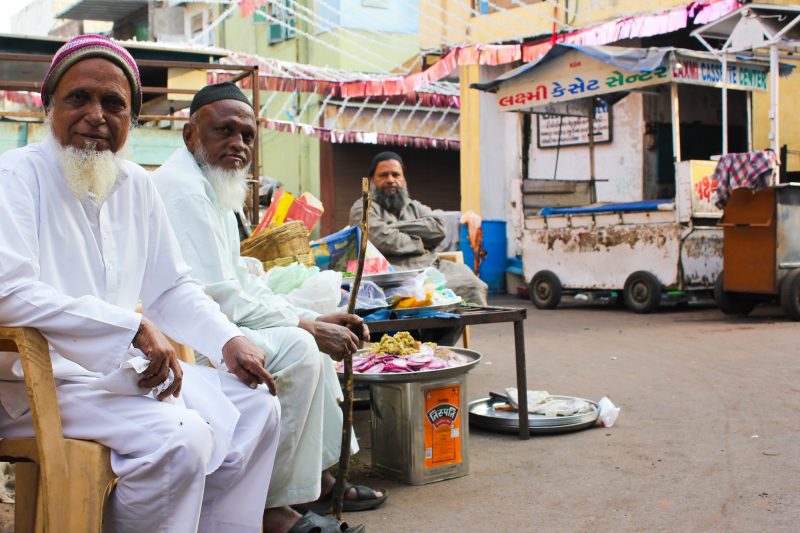 Muslim men in the streets of Lal Darwaja, in Ahmedabad, India. Image via Flickr by Juliana Cunha. CC BY-NC 2.0

Along with its more than 37,000 positive COVID-19 cases and over 1,200 deaths so far, India finds itself battling against another threat. Ever since Prime Minister Narendra Modi announced a country-wide lockdown on March 25, 2020, instances of Islamophobia have intensified and many leading news channels stand accused of adding fuel to the fire.

This sudden uptick in COVID-19-related Islamophobia is related to a gathering organised by the Tablighi Jamaat, a Muslim missionary group, which took place in India's capital a day ahead of the nationwide lockdown on March 24. The event was largely blamed for the increase in India's COVID-19 cases.

While Islamophobia against India's Muslim population has increased slowly since Modi came to power in 2014 — with multiple lynchings, riots, and mob attacks recorded — troll armies used the Tablighi Jamaat meeting to target Muslims on social media and elsewhere.

Complicating matters were accusations that India's right-wing groups, including those linked to the BJP, spread rumors and harassed innocent people as part of an alleged campaign to blame the spread of COVID-19 on Muslims.

The fallout is proving disastrous, as some Indian hospitals have already begun refusing to admit Muslims. On April 19, as coronavirus-related Islamophobia surged, local media reported the deaths of two newborn babies after hospitals in Jamshedpur refused to admit their Muslim mothers.

Another Muslim woman, Rizwana Khatun, who showed up at a Jharkhand hospital pregnant and bleeding, miscarried after she was denied treatment. She was allegedly asked to clean up her own blood.

Meanwhile, the tone of the anti-Muslim commentary caused many from the Gulf region, including the Organisation of Islamic Cooperation (OIC), the Government of Kuwait, a royal princess of the United Arab Emirates (UAE), and a number of Arab activists, to protest:

Khaled Al-Suwaifan, Lawyer and Member of the Board of Directors of the Kuwait Bar Association tweeted:

We call on international organizations, especially the United Nations, the Security Council, the Organization of islamic cooperation and all human rights organizations, to intervene immediately to stop the violations committed against our Muslim brothers in India #India

Valentis Hospital in Meerut (Uttar Pradesh) has put out an advertisement in local Hindi newspaper stating that it will not treat Muslim patients. Religion discrimination is not just done here, it is celebrated and advertised! Please spread the word in global community. pic.twitter.com/gThIKq7iFQ

The advertisement states that Muslims will not be admitted to the hospital unless they provide proof that they have tested negative for COVID-19.

This particular hospital mentioned that Muslim patients will be charged for expensive COVID-19 tests. Test kits can cost as much as 4,500 Indian rupees (approximately 60 United States dollars), a huge sum for many who eke out a living by doing manual labour, which typically pays around a minimum wage of 176 Indian rupees ($2.3) for an eight-hour workday. According to a government order, testing in government facilities are free and the government will reimburse private labs for testing the 500 million people the fee of each test — 4,500 rupees covered by a flagship public health insurance scheme.

Despite the initiation of police investigations, reports of discrimination against Muslims have also surfaced regularly across the northern and western parts of the country. News channels — including Times Now, Republic TV, and India TV — have run regular shows demonizing the wider Muslim community, by linking it to the Tablighi event:

Muslim Are Facing Worst Things In The Country

No Muslims Vendor Can Enter Into Hindu Majority Area

Yesterday, hundreds of Tablighi Jamaat members, who were fasting donated plasma at Sultanpuri quarantine centre in Delhi. This is the very same Muslim group that is being vilified & scapegoated day in & day out by media and the ruling govt. pic.twitter.com/pYiIhi0q8i

Jamaat chief Maulana Saad Khadavli, who faced legal charges over the event, recently appealed to COVID-19 survivors to donate blood plasma. He also urged all Muslims to stay home and pray during the holy month of Ramadan:

Despite Ramadan ?, tablighi members are donating blood plasma for people infected with covid as hospitals are struggling for donors. These same Tablighis were accused of all kinds of nonsense by govt & the media. Prayers for all! pic.twitter.com/bjBseQJFKY

New Delhi's Chief Minister Arvind Kejriwal has also asked that everyone who recovered from the virus — irrespective of their caste or religion — come forward and donate plasma.

After two Hindu holy men were killed by a mob in Maharashtra during the lockdown period in April, a video of the incident went viral. Tweets claiming they were murdered by Muslims gained prominence, with some of them even targeting Chief Minister Uddhav Thackerey, who — after breaking ties with BJP — formed a coalition government with the left-centrist groups Indian National Congres and Nationalist Congress Party.

The communal polarisation people have been experiencing in the wake of COVID-19, is summed up by this tweet:

Initial incidences of Covid19 were blamed on Jamat & given Muslim Twist

This madness must stop!

Some columnists have been trying to focus attention on the issue. Apoorvanand wrote in the Indian Express:

In the seven decades of Independent India, Muslims have systematically been forced into ghettoes. There were already two zones of sensibilities in India — Hindu and Muslim. The current crisis is being used to deepen the divide.

Sagarika Ghose wrote in the Times of India:

Scientists are working to find a vaccine for coronavirus, but who will cure the communal virus? It can only be cured if each of us journeys inwards to find humanity within, to treat fellow human beings as equals. After all, this is the teaching of every great religion, whether Hinduism or Islam. If even a global pandemic which knows no boundaries cannot end religious hatred, what can?

As India grapples with the prejudices the COVID-19 pandemic has brought to light, it must confront its own complicated history — because even if political groups discriminate, this virus does not.