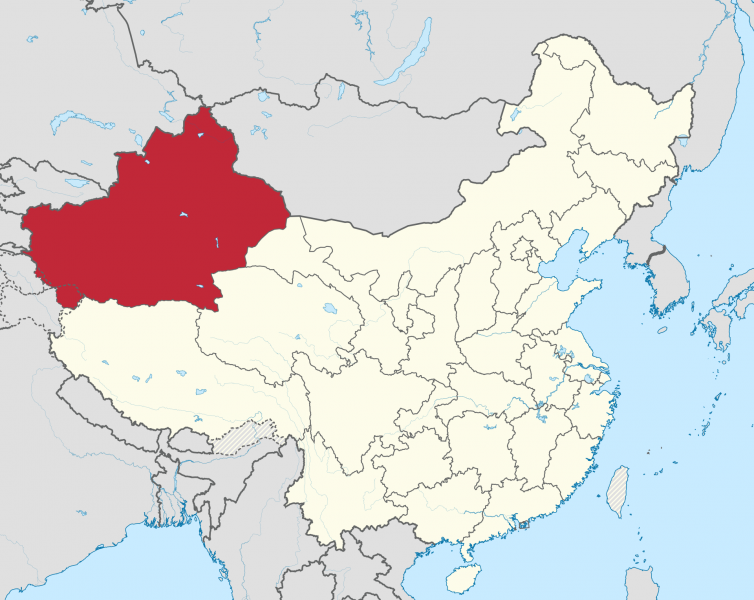 Map of Xinjiang here in red, from Wikipedia, used under license CC BY-SA 3.0

Starting in 2017, China's government ramped up its systematic targeting of minority citizens living in the western province of Xinjiang. Xinjiang, which is the Chinese denomination (新疆 which means New Frontier, while Uyghurs often refer to it as the Uyghur Region, or Uyghur lands), is home to Muslim-majority groups that include 11 million Uyghurs and smaller numbers of Kazakhs, Kyrgyz, Tatars, Hui and others. Widely portrayed as ‘motherland separatists’ or simply ‘terrorists’ in mainstream Chinese discourse – including in government statements and media – the peoples of the region have been deprived of their most basic human rights, including freedom of religion, of movement and of communicating in their native language.

State-led persecution has taken different forms: imprisonment – often with heavy sentences of over 10 years  – and incarceration in internment camps, which, according to expert sources, may contain over a million mostly Muslim minorities.

Given the secrecy of the internment camps, which China insists on presenting as ‘vocational training centers’, and the lack of information coming from the country's jails, it is impossible to say how many people have died in incarceration, often without knowing what they were accused of. Press reports suggest the figure could be hundreds or possibly thousands. For the relatives of detainees, located both inside and outside China, the pain of knowing nothing about the wellbeing of their loved ones is relentless and does not lessen as the months and years go past.

More detailed information is available via the Xinjiang Victims Database.

Global Voices has been reporting regularly on this issue since and continues to update its coverage with stories, essays, testimonies and interviews:

Solo protest in the Netherlands for the Uyghur cause: One man takes on the Chinese state

A feeling of hopelessness: Interview with an Uyghur refugee in Turkey

Kazakh family of musicians and writers caught in the Xinjiang vortex

Letter to China: My Uyghur friend Zainur has been detained in one of your camps for two years

From camps to prisons: Xinjiang's next great human rights catastrophe