Beijing says Chinese citizens don't care about a US boycott 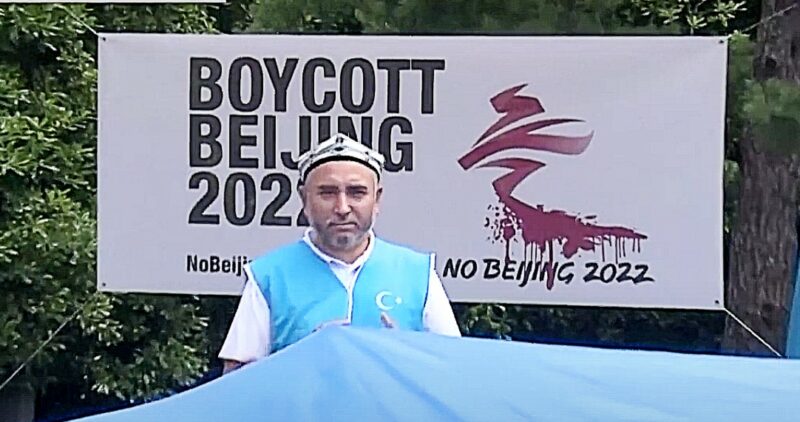 A protest against Beijing 2022 Winter Olympic in Switzerland on June 23, 2021. Screenshot from No Comment TV.

The US government announced a diplomatic boycott of the 2022 Beijing Winter Olympics on December 6, citing concern over “egregious human rights abuses and atrocities in Xinjiang.” The statement refers to the Uyghur genocide and human rights violations the Uyghur community has faced in China.

White House press secretary Jen Psaki told the press that the US administration would not contribute to the “fanfare” of the Olympics. No official US delegation will attend the 2022 Games, but unlike the complete boycott of the 1980 Moscow Olympics against the Soviet invasion of Afghanistan, American athletes are allowed to participate in the Games.

US president Joe Biden revealed last month that he was considering a diplomatic boycott of the Winter Olympics. Last week, Lithuania announced that it would not send an official delegation to Beijing and it is anticipated that more countries, including Canada, will join the diplomatic boycott.

In the days leading up to the announcement, China’s spokesperson, Lijian Zhao vowed that China would take “resolute countermeasures” should the US choose to boycott the Olympics.

The #US should follow the #Olympic spirit of “together” and stop politicizing sports and the diplomatic boycott of #Beijing2022, lest it would affect China-US dialogue and cooperation on key areas. #China will take resolute countermeasures if the US is bent on the wrong decision. pic.twitter.com/xnDBIDzGer

So far, no concrete countermeasures have yet been announced by Beijing. Solomon Yue, a Chinese American Republican activist and CEO of the lobbying group Republicans Overseas, mocked China’s aggressive political rhetoric:

What countermeasures? NOT sending Chinese students to America? Withdrawing remaining 36 Confucius Institutes from America? Closing down CGTN in America? Go ahead, make my day! https://t.co/fdcTd7Sr8D pic.twitter.com/yYQ1cyVeqI

Indeed, after the Biden administration made its official announcement, Liu Pengyu, the spokesperson of the Chinese Embassy in the US abandoned threats of countermeasures and called the boycott “political posturing.”

Politicians calling for boycott #2022BeijingOlympics are doing so for their own political interests and posturing. In fact, no one would care about whether these people come or not, and it has no impact whatsoever on the #Beijing2022 to be successfully held.

Hu Xijin, chief editor of the Chinese state-funded Global Times went further to suggest that Beijing would not welcome the US officials anyway:

Only super narcissistic people will regard their absence as a powerful boycott. Most of those US govt officials are close contacts of the COVID-19 patients according to China’s standard, moreover picky and pretentious. You are the people that Beijing residents least want to see. https://t.co/jMrrmBHr8G

Meanwhile, some said the diplomatic boycott is not far enough, arguing that US athletes should be barred from attending the Games in China. Other organizations that have been advocating for the Winter Olympic boycott urged more action against China’s human rights abuses. Sophie Richard, China Director of the Human Rights Watch said:

2/2: But this shouldn’t be the only action. The US should now redouble efforts with like-minded governments to investigate and map out pathways to accountability for those responsible for these crimes and justice for the survivors. https://t.co/zO3GgI8P54 @hrw @hrw_chinese

While some, such as US politicians Tom Cotton and Carlos Gimenez, have insisted on a complete boycott, Jerome Cohen, law professor of the New York University, is more interested in observing individual athletes’ actions in Beijing during their Games as more sports stars have spoken out against human rights abuse in China in the past two years:

It will now be interesting to see how the participating US athletes will conduct themselves. Will any engage in human rights protests? In what ways? When? To support which of the several causes that cry out for protest? Quite a challenge for young people.https://t.co/EDwcbED0g4