As is usually the case with politically tense circumstances, internet users vented their frustration with memes 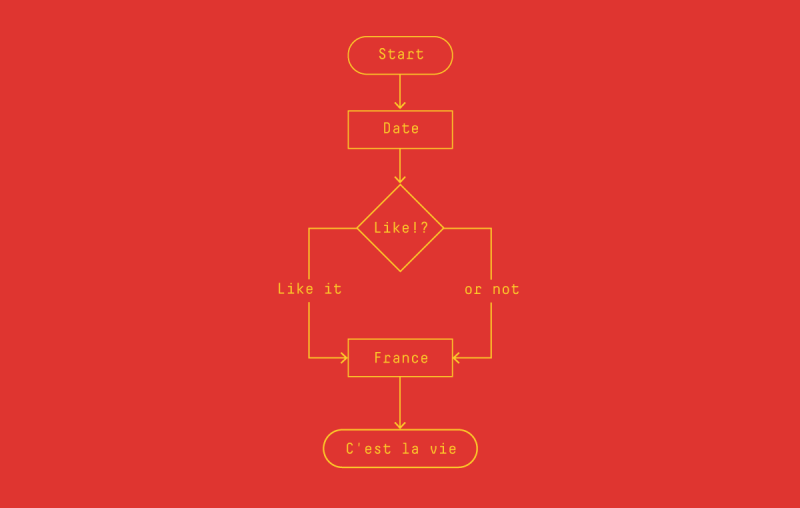 A proposal for “new Macedonian flag” with a block diagram of the French veto to granting date for start of EU accession negotiations with North Macedonia. Translated graphics by @banekoma, used with permission.

The week ending October 19, 2019, was a rough one for North Macedonia and Albania, as the date for the long-anticipated start of negotiations for the two Western Balkan countries’ European Union (EU) membership didn't materialize, due in large part to a lack of support by France.

The EU's non-decision forced Macedonian PM Zoran Zaev to call early elections. “A great injustice was inflicted on us… I am disappointed and angry and I know our people feel the same,” he said in a press conference on October 21. Zaev's election on a pro-EU platform in 2017 broke a 12-year streak of nationalist, right-wing governments in North Macedonia.

Zaev's disappointment was shared by EU top leaders, including Commissioner for Enlargement Johannes Hahn, who also voiced concern over the EU's shattered credibility. But reactions by social media users from North Macedonia, many of whom had hoped their country would be able to join the European Union as soon as possible, ranged from unpleasant surprise and outrage to… well… humor.

Members of the troll army linked to the country's biggest opposition political party engaged in triumphant gloating, and also used the opportunity to defame pro-EU opinion makers. One propaganda portal, for instance, published a photoshopped image of a fake tweet, which purported that a journalist used vulgar hate speech against the French and Roma people.

Nationalists whose party had been receiving various kinds of support from the Kremlin echoed its demands for the government to resign, as well as their desire for the Prespa Agreement — which changed the country's name as a precondition for joining the EU and NATO — to unravel.

As was the case with other politically tense circumstances, however, some internet users vented their frustration by making light of the situation:

EU managed to redeem even the irredeemable optimists.

Many reactions focused on the role of France in the ongoing developments:

French kiss is when, in the right moment, you look straight into her eyes, pull her gently closer to your body, and then you block her EU accession processes.

One Twitter user even asked whether the French had been holding a grudge since 2012, when North Macedonia's right-wing populist regime plagiarized Paris’ Arc de Triomphe, producing a local copy as part of its Skopje 2014 project.

On October 16, French President Emmanuel Macron said that one of the reasons for disallowing EU enlargement into the Western Balkans was the high number of asylum applications France had received from Albanian citizens. The satirical persona of Mile Panika countered Macron's excuse with a tweet that received over a hundred retweets and more than six hundred likes. This was representative of the regional zeitgeist that underpins mass emigration, something that could potentially get worse:

They didn't want scum like us to enter the EU. Let someone tell them that if they give us the date there's some chance that some of us would remain here. But if they don't give us [the date], then we shall all move out there [into Western Europe], and become a much bigger problem for them.

Mile Panika was a member of the Monty Python-like local TV comedy show K-15, which was closed down in 2012 after its sponsors, pressured by the nationalist regime of Nikola Gruevski, pulled the plug. One of the show's old sketches, which pokes fun at EU resistance to Western Balkan accession, made the rounds on social media this weekend — a local portal said it had “predicted the future in the style of the Simpsons“.

The sketch proposes linking Macedonia with Montenegro, which would bring many benefits such as access to the sea for landlocked Macedonia and solving the name issue with Greece (sine qua non at the time), as the name of new state would be a portmanteau of Montenegro and North Macedonia: “Black Macedonia.”

Hundreds of Twitter users also shared and liked the tweet by a parody account designed to poke fun at North Macedonia's prime minister, Zoran Zaev. This English-language profile intentionally includes grammatical mistakes and translates Macedonian idioms literally, all for comedic effect. For instance, the following tweet mistranslates the phrase “да сме живи и здрави”, which means, “After all, the important thing is to be alive and healthy”, no matter what else has happened — but the transcription doesn't quite communicate that sentiment:

If no date to be health and live

In addressing the possibility that the anti-enlargement forces within the EU might not allow entry of new member states in this lifetime, information technology expert Ilijanco Gagovski referred to another piece of popular culture, that would be well-known to anybody born before 1980. He reminded of an oft-repeated saying by the Yugoslav leader Josip Broz Tito which references a two-pronged policy of internal reforms aimed at rebuilding the country after World War II while at the same time preparing to defend its independence from foreign invasions during the Cold War:

During Tito's reign, a popular quote was attributed to him — ‘We shall work as if we'll have 100 years of peace, but we will also prepare as if we expect a war to start tomorrow!’
Adjusted to our situation it would be ‘We should conduct reforms as if we are already negotiating EU accession, while we are also looking for solution as if we expect never to become a member state!’

Finally, designer and activist @banekoma, who had been posting satirical comments on different fora with proposals for the new Macedonian flag, suggested an updated version of the EU flag featuring the main character from the Italian-Japanese cartoon Calimero. In North Macedonia, the luckless little bird is most famous for his frequent quip, “There's no justice!”: