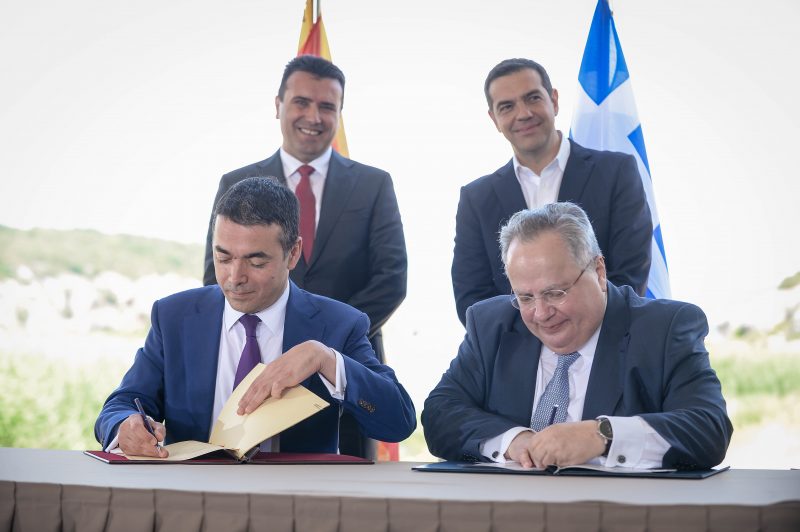 Ministers of Foreign Affairs of Macedonia and Greece, Nikola Dimitrov and Nikos Kotzias sign historic agreement, with Prime Ministers Zoran Zaev and Alexis Tsipras in the background on 17 June 2018 in the village of Psarades/Nivici in the Greek part of Prespa Lake District. Photo by the Government of Republic of Macedonia, Public Domain.

After the prime ministers of Macedonia and Greece delighted the international public by agreeing to end the 27-year-old Macedonia name dispute, their domestic rivals are attempting to sabotage the deal that would pave the way for Macedonia's entrance into the European Union (EU) and NATO.

The agreement involves concessions on both sides, including consideration of the main Greek demand that the future name of current Republic of Macedonia contains a geographic qualifier that would designate it as only a part of the geographical region of Macedonia, whose territory extends to Northern Greece, as well as parts of Eastern Bulgaria and Western Albania.

So what's the name both governments agree on? The Republic of North Macedonia.

The deal also addresses concerns by ethnic Macedonians, who comprise the majority of the Republic of Macedonia’s population. Their distinct identity has been denied by nationalists of the neighboring Balkan states, who claim that they are really an “estranged” sub-category of neighboring Slavic peoples — Bulgarians or Serbs — despite the fact that the markers of ethnic Macedonians’ identity, like their unique language and culture, had been recognized by the international community for decades.

With the deal, Greece agrees to respect them and designate their nationality as “Macedonian” or “citizens of the Republic of North Macedonia”.

For the Republic of North Macedonia, ending the dispute is a life-saving development. It means that Greece will lift the veto that has been blocking Macedonia’s entry into two key international organizations: NATO and the European Union. The majority of Macedonian citizens, who are otherwise divided across ethnic, religious and ideological lines, agree that achieving this consensual long-term strategic goal would help their multi-ethnic society move from being in a transitional state of limbo to becoming a normal European country.

NATO membership is particularly important, as it guarantees security and sustainability for the state — the very existence of which is disputed by various nationalist forces, and which has been brought to the edge of civil war twice in the last three years thanks to its former Russia-supported populist regime, which ruled the country from 2006 to 2017.

EU membership would provide more opportunities for good governance and economic development. Accession negotiations include a thorough review of all aspects of governance, which could result in a more efficient fight against corruption. Membership also provides additional mechanisms for the protection of citizens’ rights, subsidies for building infrastructure and other industries, and free movement and employment opportunities across the union. In recent years, over 120,000 Macedonian citizens (out of about two million) have requested citizenship in neighboring Bulgaria, primarily for economic reasons.

Contrary to the approach of former governments of the two Balkan nations, which mainly deepened the divisions between Macedonia and Greece, prime ministers Zoran Zaev and Alexis Tsipras have led a process of trust-building that the international community was happy to support.

When they announced that they had reached a deal to end the dispute which, for over a quarter of a century, had consistently generated tensions that teetered dangerously close to the possibility of a new Balkan war, their accomplishment was lauded as one worthy of a Nobel Peace Prize.

We have been locked in the EU waiting room over the name issue for far too long. Now the people need to see that door fully opened to support the compromise. Grateful to Minister @HeikoMaas for supporting the Macedonian strive to start EU accession talks and accede to NATO. pic.twitter.com/ORrFx3Od46

One Macedonian Twitter user took former Macedonian prime ministers and presidents who had failed to solve the Macedonia naming dispute to task, accusing them of keeping the country isolated and poor:

Damn you, you know who you are, [Branko Crvenkovski], [Ljubcho Georgievski], [Vlado Buchkovski], [Kiro Gligorov], [Gjorge Ivanov]…
27 YEARS you took from the people of Macedonia.
27 YEARS of IMPRISONMENT prescribed by you.
27 YEARS for something that Zoran Zaev solved in 9 months.

Even though most Macedonians don’t consider the agreement perfect, they acknowledge that their country has been in a disadvantaged position and therefore had to compromise:

You may say what you like, but Zaev played this like a man and this was the only solution.

International reactions to the agreement have been overwhelmingly positive, with NATO and the EU jointly stating that they would welcome Macedonia's membership as soon as the deal is formally implemented:

Today's agreement betw. Athens and Skopje is a historic and very courageous achievement that will benefit both sides and the entire region. Looking forward to all political actors in both countries showing constructive leadership in the next steps. https://t.co/bC4CzbDOkZ

Political cross-border enemies ‘unite’ in opposition to the agreement

In both countries, traditional nationalists have been organizing protests and political actions deeming the agreement treasonous and contrary to national interests. This includes VMRO-DPMNE in Macedonia and New Democracy in Greece, both former ruling parties which are members of the center-right European People’s Party (EPP). Like other international organizations, the EPP had called for constructive support for the deal by “all political parties”, using diplomatic language without openly reprimanding its members:

Isn't it ironic that VMRO-DPMNE objects to Republic of North Macedonia, while it is listed on the @EPP website under the former Yugoslav Republic of Yugoslavia and has New Democracy as a partner, whose president criticizes the current agreement as selling out? pic.twitter.com/dfgRCG3bZm

While in power, the two EPP “sister parties” exploited the fear and hate fueled by the Macedonia naming dispute to present themselves as defenders of their respective national interests and increase support from domestic right-wing voters:

BTW VMRO can only blame themselves for the citizens’ indolent acceptance of the name change… They turned them into paupers and now the most humiliating name is more acceptable than the humiliation of not being able to provide your own child with money to buy a sandwich for school lunch, clothes, afford a modest trip or a vacation….

In Greece, the parliamentary opposition led by New Democracy initiated a no confidence vote against Tsipras’ government ahead of the foreign ministers’ signing of the agreement on June 17, 2018. The government majority persevered, with lawmakers voting 153-127 against the motion, in the 300-member parliament.

In Macedonia, VMRO-DPMNE deemed the agreement “capitulation” to Greek blackmail, and vowed “to oppose it with all democratic means”. Macedonian President Gjorge Ivanov, who got into office with VMRO-DPMNE support in the 2014 elections — which were marred by allegations of fraud — echoed these claims.

In the period before the government published the full text of the agreement, VMRO-DPMNE made many attempts to persuade citizens that the agreement would be detrimental. On social networks, for instance, VMRO-DPMNE apparatchiks took part in seemingly coordinated efforts to convince non-English speakers that the new name implies that the word “Macedonia” would be “surrendered” and would designate only the Greek territory. Making an intentional typo, they claimed that the new name would be the “Republic North of Macedonia”, meaning an unnamed land to the North of Greek Macedonia, instead of the correct name, the “Republic of North Macedonia”:

Image: Screenshot of the Facebook post by Arsenco Aleksovski typing ‘Republic North of Macedonia’ in English and corresponding Macedonian translation, with his comment ‘Well this is even scarier? You can see for yourself on Google Translate.’

As in the past, such protests — with the call for a “Clean Macedonia” and chants calling for the killing of Albanians with gas chambers — provided a platform for those advocating ethnic cleansing against groups of people living in the country:

They sing against the accursed [ethnic slur] Albanians, while the problem with the name is with the Greeks. The drugs they take are hard.

In Greece and Macedonia, violent protests continued after the agreement was signed, with police in both countries using tear gas to disperse participants. In Skopje, police intervened after the demonstrators threw incendiary devices at them, and tried to storm the parliament again, while waving the old Macedonian “Vergina flag” (which was changed after a 1995 deal with Greece) as well as the flag of Russia.

The deal's signing is just a first step in a long process: it must be ratified in the parliaments of both countries and there could be a possible referendum over its approval in Macedonia. Its opponents will have more opportunities for obstruction.