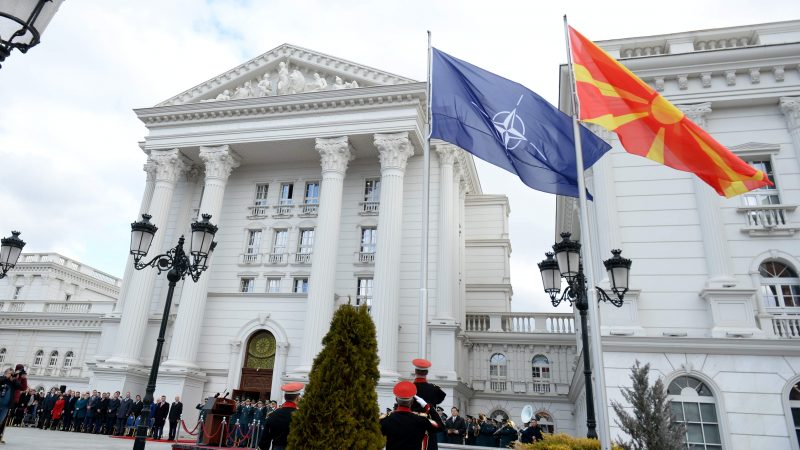 On January 11, 2019, the parliament of North Macedonia approved the constitutional amendments that changed the country's name to Republic of North Macedonia, at last ending a 27-year-old dispute with Greece, which has its own region called Macedonia.

The amendment enshrined in national law the UN-brokered Prespa Agreement, signed in June 2018 between Greece's Prime Minister Alexis Tsipiras and his Macedonian counterpart Zoran Zaev. They were both nominated to this year's Nobel Peace Prize for ending one of the oldest active ‘cold’ conflicts in Europe.

The change was a crucial step on the Republic of North Macedonia's path towards joining the European Union and NATO, as that had been vetoed beforehand by Greece because of the name issue.

However, that didn't just transform the Balkan country's international relations: it also introduced many changes that affect the everyday lives of its people.

The names of government bodies, websites, road signs, and inscriptions on public buildings have either been replaced, or are slated to be replaced, since the new name became official on February 12.

Symbolically, the road sign on the Greek border was the first to be amended with the new name. Some others will incur in significant costs and are still pending. That includes the plaque on the government's main building. The original sign, with the words “Government of Republic of Macedonia,” was removed on February 11 and a new one hasn't yet arrived.

For citizens on both sides of the border, one benefit of improved neighborly relations is the reinstatement of a flight connection between Skopje and Athens after more than ten years. The flight began on November 1, 2018. 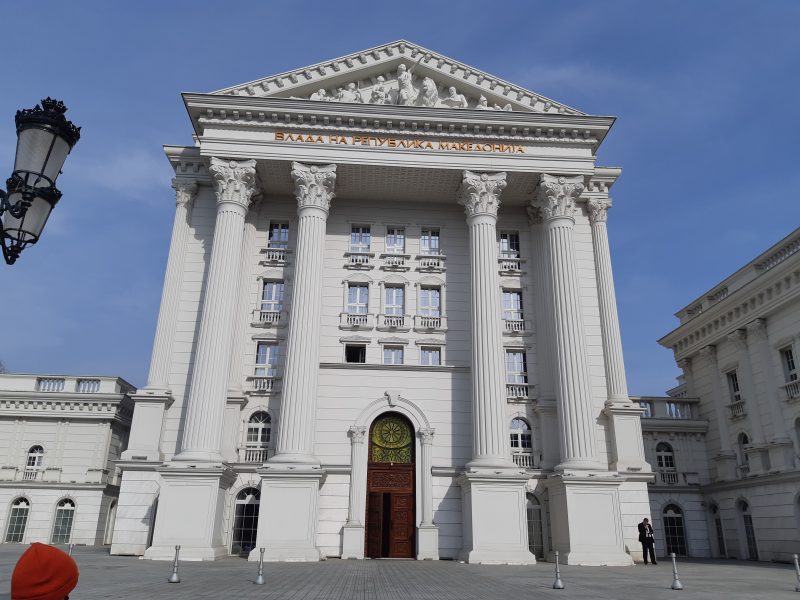 Before: On February 10, the government seat's building displayed the words “Government of Republic of Macedonia,” in Macedonian Cyrillic. They were removed the next day to be replaced with the new constitutional name of the country. Photo by Global Voices, CC-BY

The Prespa Agreement stipulates that the personal documents of the citizens of the Republic of North Macedonia will be changed over the next five years.

Documents such as passports, ID cards, or car license plates, will be valid over this period, and replacement will be gradual. Citizens whose documents bearing the old name expire before that deadline will get new ones, with the new name, whenever they renew them.

Meanwhile, the police officers on all border crossings started adding a stamp onto Macedonian passports that says: “This passport is the property of Republic of North Macedonia.” This is a temporary measure while passports with the old name are still valid.

North Macedonia's codes for license plates will also change from MK to NM or NMK, and border authorities have started putting “NMK” stickers on plates over the old MK field.

One concession made by the Prespa agreement is the country's code for purposes other than license plates, like the top level internet domain, which will remain MK and MKD, as officially assigned by the International Organization for Standardization (ISO). 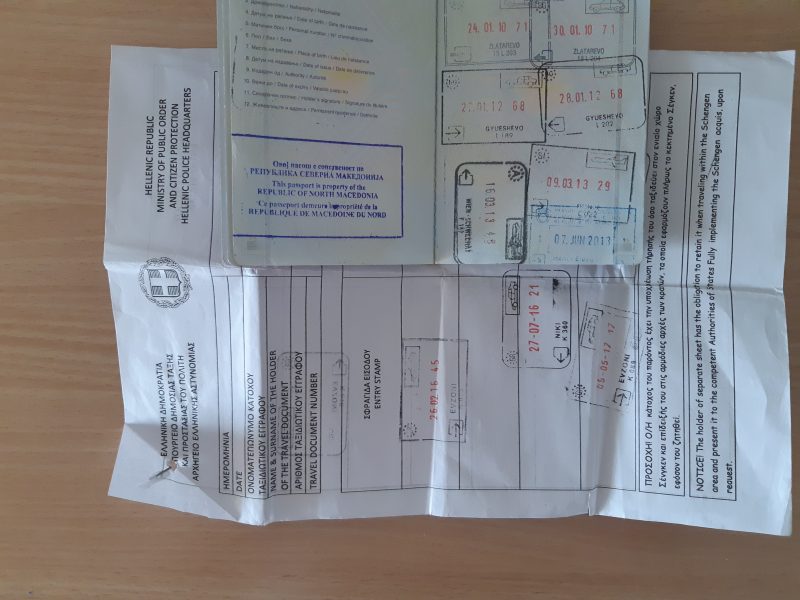 The inside front cover of a Macedonian passport with a stamp designating the new name of the country in three languages (Macedonian, English, and French). Underneath it, a now-obsolete sheet that Greek authorities used to stamp entry and exit of Macedonian visitors in place of their passports. Photo by Global Voices, CC-BY

Greece has also introduced a few changes since the agreement's signature, including recognizing North Macedonia's passports.

Until February 2019, Macedonian visitors in Greece had to fill in a separate piece of paper in Greek and English which served as a kind of surrogate passport — a document that border police would stamp so that they didn't have to deal with passports bearing the name “Republic of Macedonia.” While on Greek soil, travelers had to keep that piece of paper with them at all times.

Since the Prespa agreement, Greek authorities have also stopped putting stickers on the cars of Macedonian citizens entering Greece that read, in Greek and English, that the country was “recognized by Greece as FYROM.” The acronym stands for “former Yugoslav Republic of Macedonia,” which was how the UN referred to North Macedonia since the 1990s while a solution to the dispute was pending.

In 2012, this was considered a humiliating provocation by Macedonian authorities, as well as by Macedonian tourists visiting Greece who saw it as unnecessary political harassment while they put money into the Greek economy.

Nothing changed for the Greek citizens traveling to North Macedonia. Their passports were always recognized by Macedonian authorities, who also didn't put any stickers on their cars when visiting their central northern neighbor.

The multiple uses of the term ‘Macedonian’

Solving a generational conflict by compromise has been considered revolutionary for the Balkans, a region where nationalist tenets still dominate much of domestic and regional politics.

The agreement states that the term “Macedonian” has different meanings to different people, and neither signatory party has an exclusive right to its use nor can forbid the other to use it in their particular context.

Therefore, the Greeks can continue using it in the context of the history of ancient Greece and in the contemporary sense of their northern region, while the Macedonians use it to designate their modern ethnic identity and language, which is part of the Slavic branch of the Indo-European family. Around 64 percent of North Macedonia's population are ethnic Macedonians.

This is the set of media guidelines published by the Ministry of Foreign Affairs on the official use of the terms based on the stipulations of the Prespa Agreement:

In the meantime, the relations between the two countries have been warming to an unprecedented level of friendship.

The recent statement by Greek PM Tsipras urging the EU to start the negotiations for membership with North Macedonia in June would have been unthinkable just a year ago.

The EU negotiations process will force North Macedonia to raise its standards not only in a formal sense — by adjusting its legal system, for example –, but also in practice by solving endemic problems affecting people's quality of life, such as rampant pollution and impunity to corruption.