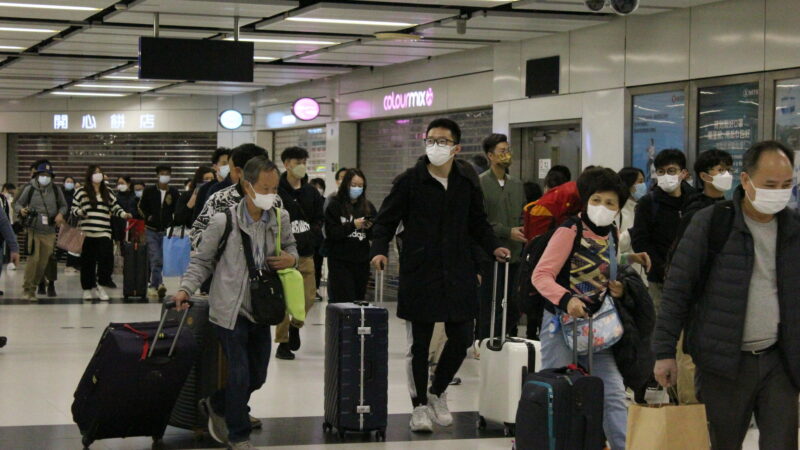 Photo taken from Lok Ma Chau, a land port to Shenzhen on the first day of border reopening. From inmediahk (CC: AT-NC)

The borders between Hong Kong and China finally reopened on January 8, 2023, after almost three years of zero-COVID restrictions.

On the first day of the border reopening, visitors surged into China from Hong Kong. According to Hong Kong Immigration authorities, 14,870 people arrived in the city while 34,756 exited via four land ports along the Hong Kong and Shenzhen border on the first day.

Citizens anticipated a flood of mainland travellers to the city because it is customary for Hong Kong residents with mainland Chinese ties to return to their homeland ahead of the Lunar Chinese New Year. The trend is expected to reverse after the New Year holidays.

The border reopening came after China took a U-turn on its zero-COVID policy, which required inbound travellers to adhere to stringent health policies, including, quarantining for a week, installing an app for health and location check-in, obtaining a negative COVID-19 PCR test result within 48 hours of departure, and more.

Now travellers only need a negative PCR test 48 hours before departure or a rapid test 24 hours in advance to cross the border. But there is a quota system. Currently, the daily quota for both inbound and outbound travellers is set at 50,000 via inland ports and 10,000 via ferries and the Macau-Zhuhai bridge.

The reopening began amid a nationwide COVID-19 outbreak in China. Some Hong Kongers have raised concerns that mainland Chinese travellers might stress the city’s public hospital service and daily supplies, in particular flu and fever medicines.

In fact, the city has faced supply shortages of certain brands of fever medicines since late December 2022, as residents with mainland ties had to mail medicines to help out their friends and family in China. Some fear that the shortage would escalate as the border reopened.

According to an opinion survey, about 44 percent of the city residents support a complete reopening of the Hong Kong-China border, while 40 percent oppose it.

To assuage the public's concern, the Hong Kong government has stressed that it will ensure the supply of essential medicines and uphold its requirement for PCR tests ahead of border crossings. Yet, Chinese state-funded Ta Kung Pao, through its editorial commentary, politicized the negative comments on the border reopening policy as malicious acts to generate conflict between Hong Kong and China and urged the police authorities to take action against critics.

While Beijing's official narratives, such as commentary seen in the Chinese state-funded Global Times, frame the border reopening as a “new start” for businesses, among those who rushed to cross the border through land ports are mostly extended families who had suffered from almost three years of separation due to the zero-COVID policy.

The number of mainland Chinese immigrants who migrated to Hong Kong between 1997 to 2021 was more than 1.12 million, and many have direct relatives living on the mainland. Among those who rushed to cross the border on the first day of reopening were a daughter visiting her sick father, a young man who married his wife in 2018 but has been physically separated for almost three years, a grandson whose grandfather passed away three days ago, and a middle-aged man who hadn’t seen his wife and daughter for three years. They crossed the border with mixed feelings of regret, sorrow and joy.

Most of these cross-border families are from lower-middle to lower class, whose jobs cannot allow them to meet the week-long quarantine requirement under China’s zero-COVID policy.

The Hong Kong government had started negotiating with China on reopening the border arrangement in early 2021. To do so, it maintained strict quarantine requirements for incoming foreign travellers and hence undermined its global status as a financial and aviation hub. The price was paid, yet the border-crossing restrictions remained in place until China ended its zero-COVID and was at the peak of the nationwide COVID outbreak.