The situation could get more devastating after lunar new year 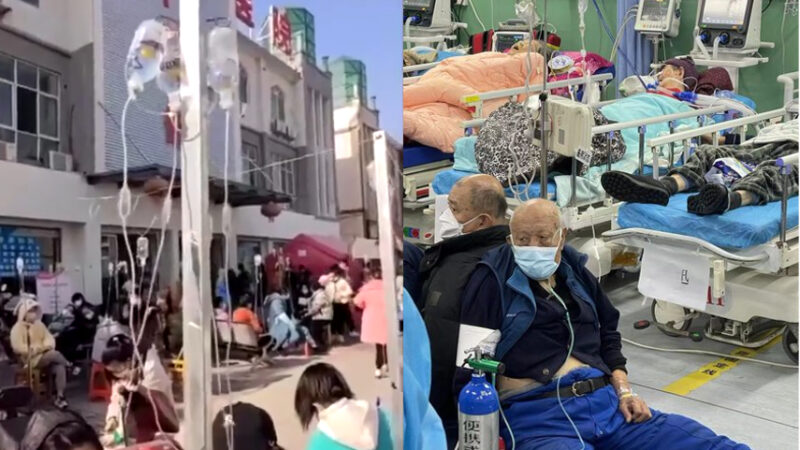 A number of countries have instituted policies requiring travellers from mainland China, Hong Kong and Macau to show negative COVID-19 test results two days before departure after a nationwide outbreak of Omicron variants in mainland China. The outbreak emerged after the country took a U-turn on the country's zero-COVID policy in early December.

The Chinese health authorities stopped announcing daily statistics on COVID infections on December 25, 2022. While official figures suggest the disease claimed less than a dozen lives in December, some medical experts are sceptical. The official infection count only tracks those who visited a hospital, while the death tolls only include deaths that were directly caused by the COVID-19 virus, which means the doctors have to make sure that the individuals have no other illnesses or preexisting conditions in order to count the death COVID-related on the death certificate.

Meanwhile, another set of figures claimed to be quoted from an NHC teleconference on December 21 has been circulating on social media in the past few days; since the lifting of restrictions in December, more than 248 million people have been infected, and the accumulative infection rate across the country is about 17.56 percent. In Beijing and Szechuan, the infection rate has passed 50 percent, while in Tianjin, Hubei, Henan, Hunan, Anhui, Gansu and Shandong, the infection rate is between 20–50 percent. After China's Spring Festival in January, experts predict the country’s infection rate could be over 50 percent.

Amid the mass outbreaks in mainland China, many countries, including Japan, Italy, Spain, the USA, Canada, Australia, and more, have required negative COVID-19 tests within two days before departure for travellers coming from greater Chinese regions due to inadequate sharing of epidemiological and viral genomic sequence data. The US Food and Drug Administration (USFDA), for example, stated:

Reduced testing and case reporting in (China) and minimal sharing of viral genomic sequence data could delay the identification of new variants of concern if they arise.

Within mainland China, panic has spread like wildfire due to the Tsunami-scale outbreak. Obituaries have flooded social media, both hospitals and crematoriums are overloaded, and people are hoarding flu and fever medicines due to supply shortages.

More and more have criticised the government's disorganized disbandment of its zero-COVID policy. A now-deleted post on Weibo said:

How many have died in Beijing? We don’t know.

The mother of actor Wang Jincong, the father of CCTV host Fan Dang passed away.

Obituaries from Peking University and Tsinghua Universities show that many professors and academics passed away.

Bodies that burned in crematoriums in Beijing surged from 40 to 150 daily and now it takes eight days for bodies to be cremated.

We can only make sense of the situation from all these traces. We won’t have the true data.

Who should be responsible for all these deaths?

Since early December, the Chinese propaganda authorities have shifted their narratives from depicting the coronavirus as a “deadly disease” and “enemy of humanity” to a harmless flu-like illness. Then recently, the official narratives pivoted again as officials suggested: “it is better to be positive earlier than later” (早阳早好).

Such a misconception, however, has added stress to the country’s medical system and put the lives of the vulnerable at risk. Many frontline medical workers were countering suggestions that COVID in China was equivalent to a flu. A surgery doctor from a top hospital in Jiangsu province cried out on Weibo:

COVID virus is not flu… after the reopening, the hospital’s respiratory ward and ICUs have collapsed. The emergency and fever wards have no more space to accept more patients…

For those who have lost their family members, they could no longer repress their frustration at the public narratives, a Weibo user wrote on December 23:

Don’t fucking tell me that COVID is just the flu! My grandparents were over 90; they were healthy and had a good life. Because of COVID, my grandpa passed away yesterday, my grandma is still in high fever and she refused to eat after knowing my grandpa had left. You are young and still suffer a lot, how about the elderly? Don't you know that all the emergency awards and ICUs in hospitals have been full? Do you know that bodies are lining up in crematoriums?  If you fucking say that this is the flu, I wish you have ten infections yearly.

Worse still, the country was not medically prepared for the outbreak, as reflected in the shortage of flu and fever medicines. Rong Jian, a veteran Chinese journalist, shared screenshots of doctors discussing the medicine shortage via Weibo:

Fuck. Even hospitals’ supply of fever and flu medicines is facing a shortage. However, the traditional Chinese medicine Lianhua Qingwen is everywhere.

In the screenshots, a doctor from a Fudan University-affiliated Huashan hospital said that their department had no more fever and cough-relief medicine in stock. Another cardiovascular doctor raised the question: who had restricted pharmacies from selling fever, flu and anti-inflammation medicines under the zero-COVID policy?

As part of zero-COVID, real name registration was required to purchase medicines that repress COVID-related symptoms. As a result, many pharmacies do not have enough stock to prepare for the mass outbreak. On the other hand, Lianhua Qingwen, among other Chinese herbal medicines, has been promoted as remedies for preventing and curing COVID, even if its effectiveness has been questioned.

The current outbreak is most dire in cities where medical resources and hospital facilities are far better than the rural areas. As the outbreak spreads to less-developed regions in the upcoming lunar new year, the situation could become even more devastating.