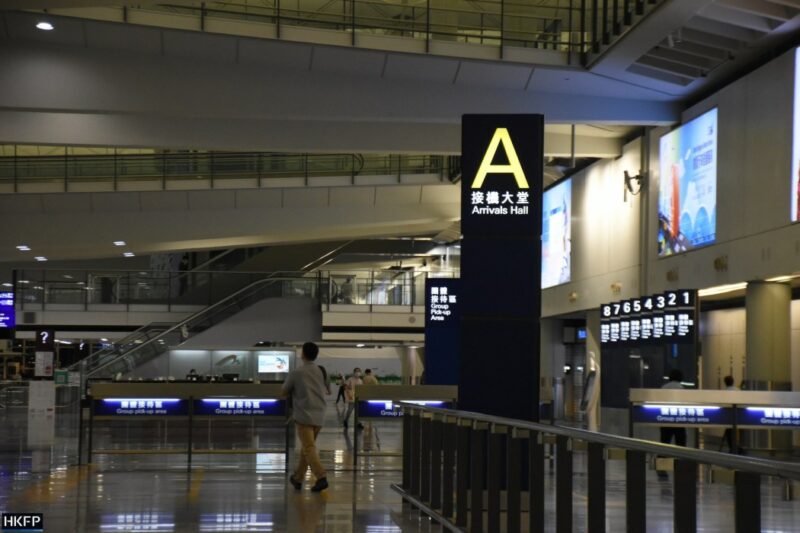 So if Hong Kong were to loosen border controls for people arriving from overseas or adopt with what other countries have done — so-called to live with Covid-19 virus — then the chances to travel with the mainland will be reduced.

Hong Kong Chief Executive Carrie Lam said this during an interview on October 26 in response to the financial lobbying group Asia Securities Industry and Financial Markets Association's request to relax the 14–21 day mandatory quarantine rules for all travelers entering from other countries.

With over 150 institutions, the finance trade group  warned earlier this week that Hong Kong’s zero-COVID strategy would undermine the city’s status as a financial hub.

The group conducted a survey among its members before issuing the warning letter:

The Asia Securities Industry and Financial Markets Association said 48% of its members were contemplating moving staff or functions away from Hong Kong due to operational challenges, which included uncertainty travel and quarantine restrictions. https://t.co/GK65vX5NBT

At the same time, HSBC’s 2021 expat explorer survey indicated that Hong Kong’s livability rank has fallen from 20 in 2019 to 40 in 2021 and its future outlook rank has fallen from 15 to 41 in the same period. Its overall ranking is now lower than that of Thailand and just slightly better than the Philippines. Meanwhile, Singapore ranks 9 and Taiwan 15 globally in the survey.

The American Chamber of Commerce had previously issued a similar warning urging the Hong Kong government to relax its quarantine requirements.

Under the zero-COVID policy, Hong Kong required a 14–21 day compulsory quarantine for all inbound travelers through a list of designated hotels. They also implemented compulsory mask-wearing in all public spaces, contact tracking, community lockdown, and mass testing whenever a local infection is detected, even though the city has had single-digit local daily infections for months.

Medical experts, like epidemiologist Ben Cowling from the University of Hong Kong, have questioned the lengthy compulsory quarantine requirement, particularly the 21-day confinement for fully vaccinated travelers from high-risk countries, which include the majority of countries in Europe, Asia, Latin America, and the US. In addition, the current control policy does not provide city residents with vaccination incentives.

Thus far, only about 60 percent of the city population has been fully vaccinated. Vaccination among the elderly, 80 years old and over, is still less than 17 percent.

But the pleas and doubts raised by the economic and medical sectors have not received a positive response.

Instead of relaxation, travel restrictions will be further tightened as the government decided to scrap most quarantine exemptions granted to specific groups of visitors coming from overseas and mainland China.

Hong Kong currently allows diplomats and business leaders as well as Hong Kong residents returning from Guangdong and Macau to be exempted from the compulsory quarantine rule. The upcoming arrangement will only allow essential workers such as cross-border truck drivers to make quarantine-free trips.

The vaccination requirements for incoming travelers will also be lowered from age 17 to age 12, starting October 29.

The cynical (though not necessarily incorrect) reading is that it's not epidemiology but politics that is driving this policy. The HK govt has put all its chips on reopening the mainland border, so we endure whatever it thinks will make that magic happen. https://t.co/S9qjB8yLNg

Indeed, Carrie Lam’s statement has made it quite clear that the city’s top priority is to reopen the border with mainland China. In order to do so, the government will not hesitate to introduce more restrictive rules which are currently implemented in China, even if they would infringe upon individuals’ privacy and rights.

covid zero *is* working in HK, in that we haven't had any community infections in six months. But HK govt is increasingly bending over backwards to prove to Beijing that it can maintain this because they want the China border reopened. So that means closing off outside world more https://t.co/2b0DP1rhxa

Border crossings between Hong Kong and Shenzhen have been restricted for more than 20 months due to the COVID-19 pandemic. To facilitate quarantine-free cross-border travel, in June 2020, the Hong Kong government began negotiating with Guangdong province and Macau to create a mutually recognized health code policy.

Currently, Guangdong and Macau have a quarantine-free travel arrangement as the two Chinese regions share a mutually recognized health code policy. Both administrations adopt a tri-color QR code system to indicate a person’s health risk and restrict their movement, but the Macau application does not have a geo-tracking function. The color is assigned according to the user's health status and contact list. But the quarantine-free travel arrangement would be suspended for 21 days whenever one local infection is observed.

On the other hand, the mainland Chinese system will track the user’s movement and automatically raise their risk level if they have been to places where an infected person has visited.

The Hong Kong government hopes that it could adopt a system similar to Macau's and further require users to voluntarily submit their contact-tracking data stored in the “LeaveHomeSafe” application.

The “LeaveHomeSafe” application is used for contact tracking in Hong Kong. Contact data is stored locally in users’ mobile devices and will only be shared with the authorities if the user is infected.

After some citizens hesitated to use the application, the Hong Kong government made it compulsory for people who visit government and public service venues starting November 1.

The policy has stirred controversy as there are still some residents who do not have smartphones. However, the authorities consider it a necessary step to get Beijing’s approval for the border-crossing health code, which will enter a trial period soon.

Despite the effort to boost the usage of the local contact tracking app, Tam Yiu-chung, a member of the National People’s Congress Standing Committee, believes that Beijing will not accept the proposal.

If the proposal is not accepted, the only option left is for those who have to travel to Macau and mainland Chinese to implement the mainland Chinese version of the health code and permit authorities to track users’ location data, as advocated by the former Chief Executive Leung Chung-Ying among other Pro-Beijingers.

However, even if the cross-border health code system is in place, the quarantine-free arrangement would be suspended if there is a local infection under the “zero-covid strategy,” which makes it very likely that Hong Kong may end up cut off from the world, yet unable to restore normal connection with China: