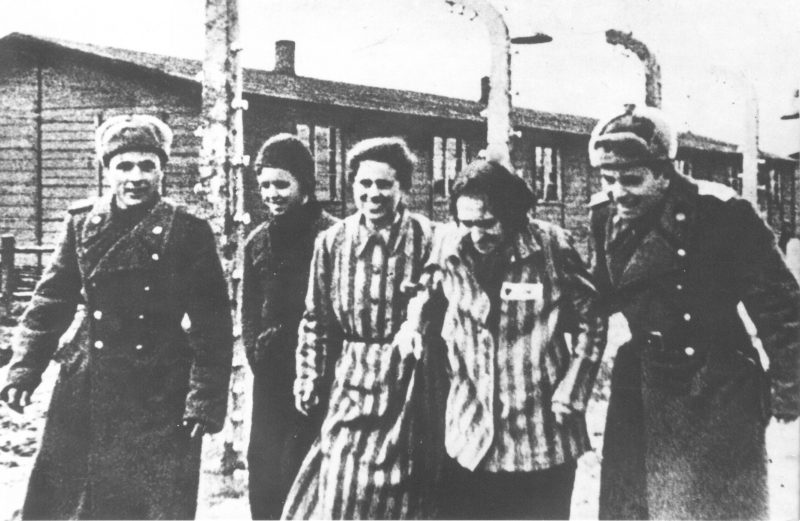 Members of Yugoslav family Mandić (Oleg, aged 11 at the time, his mother Nevenka and grandmother Olga) with Soviet soldiers in Auschwitz after the camp's liberation on January 27, 1945. Source: znaci.net, public domain.

The United Nations has declared January 27 the International Holocaust Remembrance Day, commemorating the genocide over 6 million Jews and 11 million others by the Nazi regime and its collaborators during the Second World War. On this date in 1945, Auschwitz-Birkenau, the largest Nazi concentration camp, was liberated by the Red Army.

Auschwitz was a complex of over 40 concentration and extermination camps operated by Nazi Germany in occupied southern Poland, near the town of Oświęcim. Of the 1.3 million people sent to Auschwitz since its opening in May 1940, 1.1 million were murdered with poisonous gas, starvation, exhaustion, disease, individual executions or beatings, and as a consequence of medical experiments.

Most of the prisoners were brought to Auschwitz in special railway transport, in cattle wagons with a bit of hay on the floor.

The photos below belong to several museums in the former Yugoslavia and were digitized by the online archive Znaci.net. 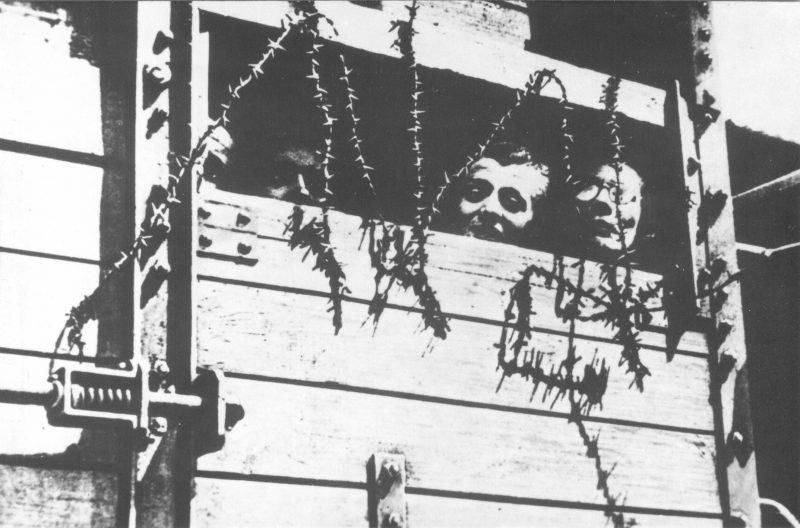 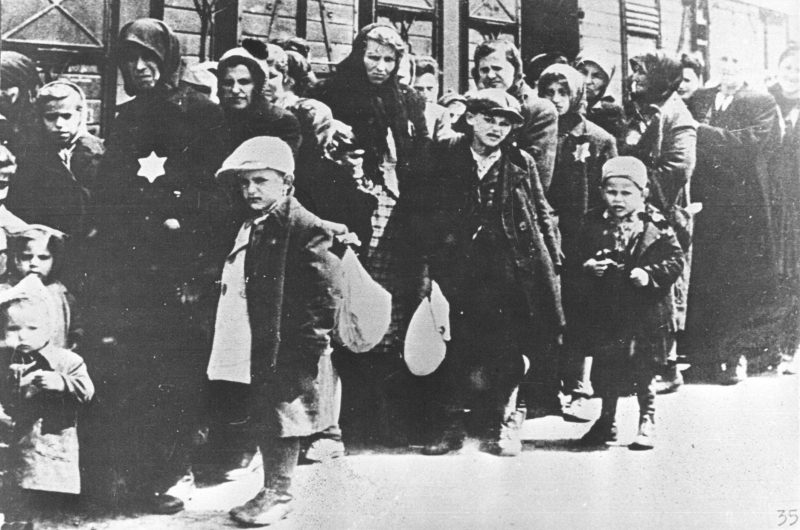 Women and children wearing the star of David, a Nazi-imposed designation for Jews, standing by the Auschwitz railway station. Photo by znaci.net, public domain.

The Auschwitz extermination camp complex was surrounded by a fence consisting of concrete pillars and high-voltage barbed wire. Only 144 prisoners have managed to escape the complex while it was operational.

After the prisoners exited the wagons, Nazi camp guards would separate them by gender while grouping the children with the women. 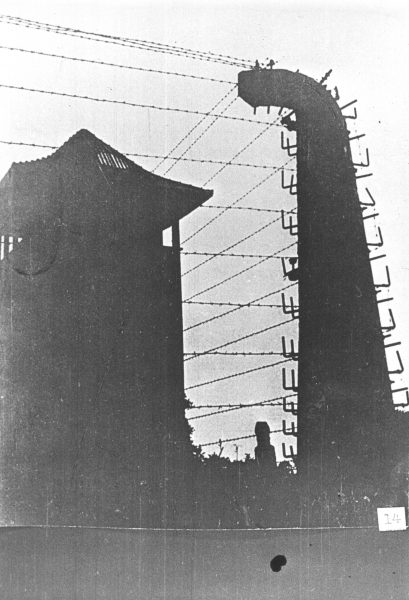 Electric barbed wire fence and concrete pillars of Auschwitz concentration camp have been preserved as part of the Auschwitz-Birkenau State Museum. Photo by znaci.net, public domain.

After that, they'd separate the sick and disabled from those fit to work. Many among the first group were sent to gas chambers before they were listed in the camp's books, which is why the total number of victims and their identity remains unknown.

The prisoners selected for slave labor underwent dehumanizing processing, which included tattooing of serial numbers, head shaving, and confiscation of all their meager possessions, including their clothes, which were replaced with the striped uniforms.

The body parts of the murdered victims also served a commercial purpose. Human hair was used to produce fabric, bones and skin were turned into gruesome souvenirs. Groups of prisoners were forced to search the corpses for golden teeth or other possessions hidden in the bodies.

Another form of extreme exploitation was using prisoners in deadly experiments, such as testing weapons of mass destruction and methods to advance the Nazi racial ideology.

Disposal of the remains of the victims was a big logistical challenge for the Nazi death factory. Five crematoria whose furnaces burned 24/7 were built in Auschwitz-Birkenau. The camp was often engulfed in a thick veil of smoke — surviving inmates later testified that they would go months without seeing the sun.

Before retreating from the camp around Christmas 1944, the Nazis blew up a few installations in an attempt to cover up their crimes. 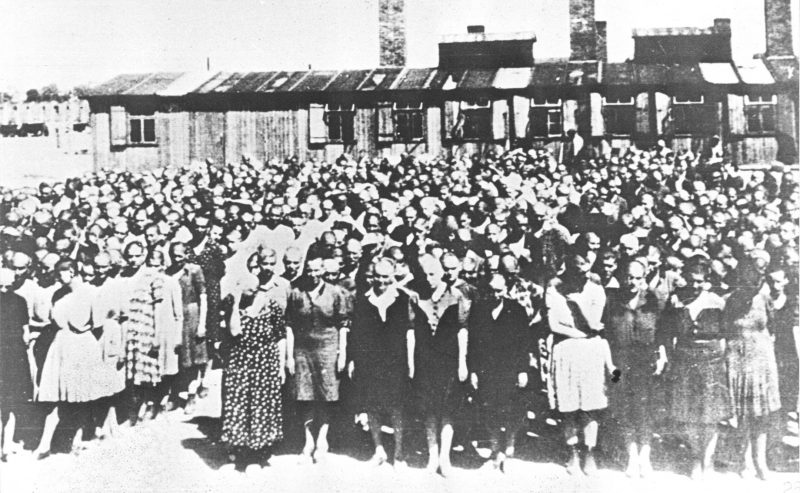 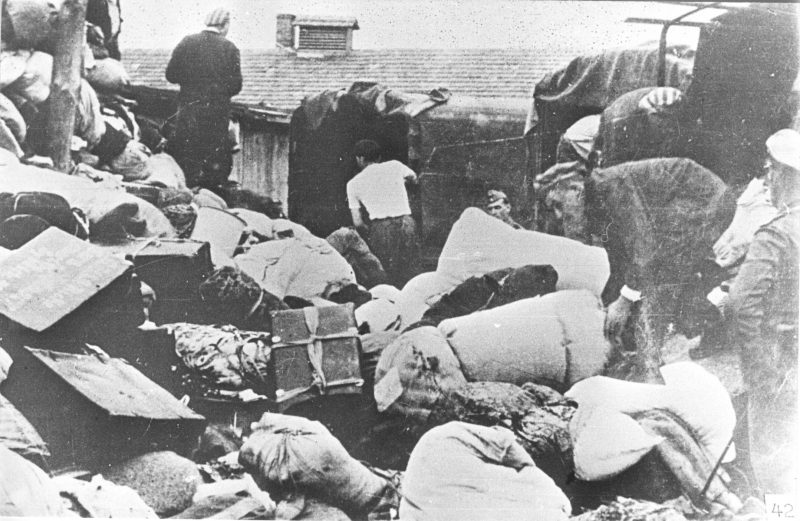 All belongings were taken from the prisoners and brought to a camp chamber called “Canada.” Photo by znaci.net, public domain. 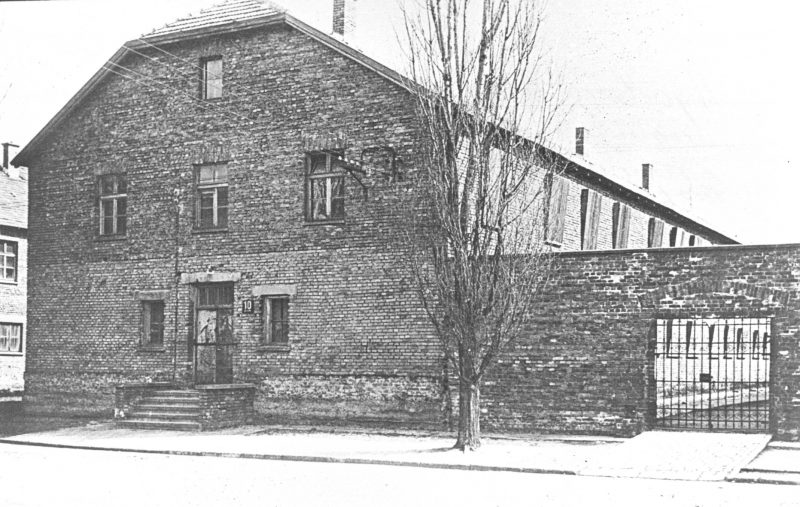 Retreating Nazis took some of the prisoners with them on a death march whose purpose was to let them die of exposure and hunger along the way. Several thousands remained or returned to the camp, where they found food in the storerooms. About one in five nevertheless died before the Soviets arrived several days later.

The Red Army units liberated about 4,800 prisoners from Auschwitz. Among them, there were 108 Yugoslavs, including the members of Mandić family. They were from Rijeka, Croatia, which was first occupied by Italian fascists and then by the Nazis during the war.

In May 1944, the Nazis arrested 10-year-old Oleg Mandić, along with his mother and grandmother,a his father and grandfather joined the partisans – the Yugoslav communist anti-fascist resistance army. After several months spent in jails in Croatia and Italy, they were sent to Auschwitz as “political prisoners.” They survived eight months in the death camp.

Oleg spent two months laboring in the women's quarters, but when the Nazis found out he had turned 11, they moved him to the men’s ward. When he developed fever due to stress, he was sent to the medical ward where SS-officer Josef Mengele conducted experiments. Over the course of several weeks, he learned to manipulate the thermometer and devised other strategies to remain interesting as an observation subject.

Oleg Mandić, his mother Nevenka, and grandmother Olga were the last prisoners who left Auschwitz alive.

The film linked below, which Mandić only saw during a visit to Auschwitz 20 years after he was fred, depicts the moment the family received a letter from Stalin’s assistant Nikolai Bulganin ordering their transport to Moscow by truck via Krakow. In the Soviet capital, they joined a visiting Yugoslav delegation led by resistance leader Josip Broz Tito, who returned with them to Belgrade by airplane on May 1, 1945.

Mandić, who is now 86, devoted his life to promoting the truth about the Holocaust. He led an antifascist NGO in Opatija, Croatia, organized an exhibition, and gave lectures and interviews in different languages. He also participates in annual group visits to the Auschwitz museum on the day of the liberation of the camp.

In 2015, on the occasion of the 70th anniversary of the liberation, he said that he still feels chills when he thinks about “the notion of a human mind devoted to devising an industrial production of death.”