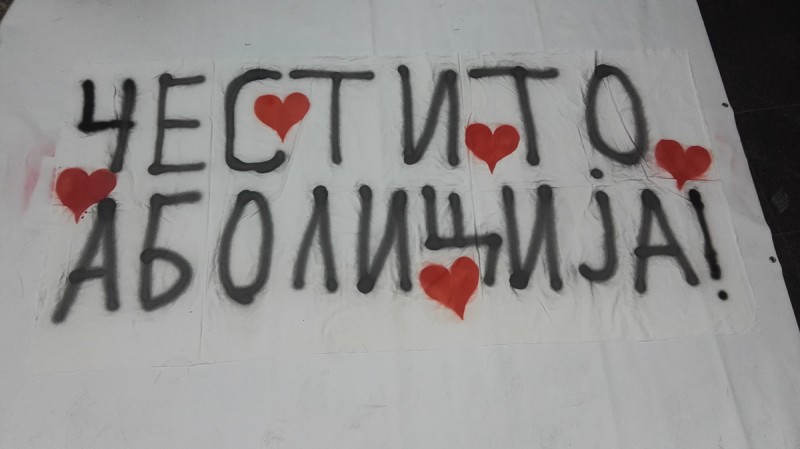 Amid nationwide protests against impunity, a group of demonstrators paid a surprise visit to Macedonia's former Minister of Interior Affairs Gordana Jankuloska, a key election fraud suspect who was pardoned by a blanket amnesty issued by the country's president earlier in April.

Jankuloska resigned as minister following a deadly shootout in the Macedonian town of Kumanovo between police and a militant group in May 2015. Afterward, she finished her PhD thesis on the “suppression of transnational financial crime.” At around the time some protesters were being interrogated in police stations on suspicions of participating in a mob or rioting, Jankuloska was attending a public ceremony to formally receive her doctoral degree at Bitola University in the Macedonian city of Bitola.

At the ceremony, the protesters unfurled a banner reading “Congratulations on your pardon!” This caused a bit of dismay among the university management and the audience, including the families and friends of 13 other PhD candidates.

Jankuloska's voice appears in secretly wiretapped conversations leaked to the public by the political opposition in early 2015. In one of them, which were recorded by the secret service under the control of the then-prime minister's cousin, Jankuloska talks to another member of the ruling party about manufacturing ID cards for phantom voters. She says:

They are printed, people already have them. There’s one tricky thing, but we knew about it and that’s why I insisted the committees give us more addresses. As you know, we have 50 people in an apartment of only 40 square meters. It is what it is.

In another set of wiretaps, Jankuloska, her then deputy Ivo Kotevski and VMRO-DPMNE party official Martin Protoger discuss the murder of Martin Neškovski at the hands of a police officer in June 2011 during street celebrations for the ruling party's re-election victory. Many Macedonians suspected at the time that authorities and sympathetic media were trying to cover up the killing, and massive protests calling for justice lasted for three months.

The wiretaps seemed to confirm those suspicions. In their conversations, the three admit that after then-Prime Minister Gruevski's bodyguard Igor Spasov killed Neškovski, a number of police officers and officials were involved in an organized attempt to deceive the public. It appears that Jankuloska and her colleagues were not informed about all aspects of the case at first, but then actively worked on “damage control”.

Except for Spasov, who was later convicted for the murder, those who helped to cover up the crime enjoyed full impunity on Jankuloska's watch. She describes her subordinates who tried to hide who was responsible for the killing on their own as “feeble-minded” and “idiots.” Some of her quotes from the wiretaps were shared as memes, like the one below: 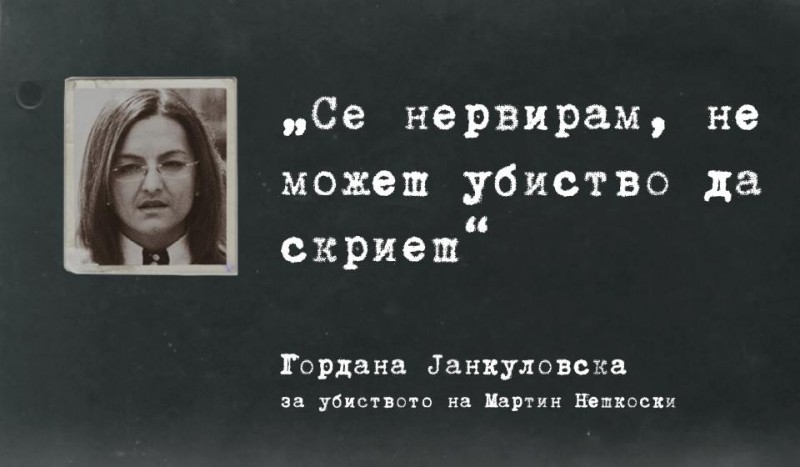 “I am nervous, you can't hide a murder.” Gordana Jankuloska, Minister of Interior about the murder of Martin Neškovski.” Widely shared meme with a quote from leaked wiretaps.