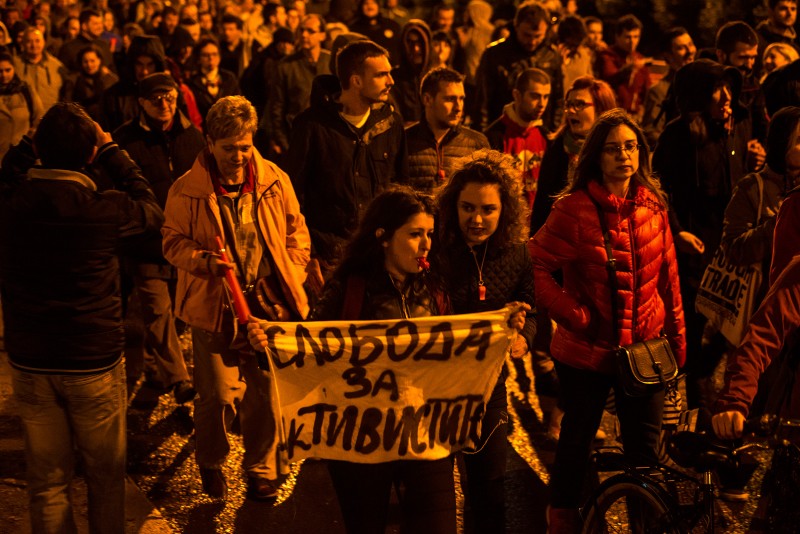 Banner “Freedom for the Activists!” at April 25 protest in Skopje. Photo by Vančo Džambaski, CC BY-NC-SA.

As massive protests against impunity for corruption continue in several Macedonian cities, police have placed five demonstrators under house arrest and are set to bring charges of participating in a mob or rioting against several others.

Authorities first summoned the protesters for questioning, then arrested them on April 25. They include university professor Zdravko Saveski, PhD, and Vladimir Kunovski, both of whom are founding members of the newly formed leftist political party Levica (The Left). The two are accused of participation in a mob, and were ordered to serve eight days of house arrest.

According to the Ministry of Interior, Saveski burned a photograph of the president and threw objects at the president's Public Outreach Office, which was ransacked on the second day of protests. Kunovski, meanwhile, allegedly took out chairs, two drawers, and a packet of juices using the broken window of the office. The packet of juices he then shared with the people present outside, according to the ministry.

The Helsinki Committee for Human Rights has accused authorities of selectively targeting prominent protesters like them in a blatant attempt to scare demonstrators and smother public unrest. House arrest for demonstrators, of course, means that they cannot participate in any rallies.

Macedonians have flooded the streets of the capital Skopje and other cities since April 12, when President Gjorge Ivanov extended a pardon to more than 50 top politicians and businessmen who were under investigation from the Special Prosecutor's Office for suspected corruption, election fraud and misuse of power. These alleged crimes came to light in conversations wiretapped reportedly on the order of former Prime Minister Nikola Gruevski that were leaked last year by the political opposition.

The pardon also earned condemnation from the Organization for Security and Co-operation in Europe, the US and the European Union, among others. Negotiations scheduled for last week in Vienna to end the political crisis were canceled, and Macedonia's government at the moment is showing no signs of reversing course.

Pro-government media outlet Kurir.mk published a list of 13 demonstrators, along with their ages and city of residence, who it said were involved in the destruction of the president's Public Outreach Office and would face charges. But some of those who appeared on the list denied that they had participated in any of the damage done to the office. One woman maintained she was actually arrested for complaining to police for dragging her male friend to the ground who had been filming officers.

‘FREEDOM is not easy to obtain!’

Zdravko Saveski and Vladimir Kunovski also appear in that Kurir.mk article. The NGO Solidarity Movement published a Facebook status Saveski posted before going to the police station, accompanied with their message that they won't be intimidated.

Fellow freedom fighters, VICTORY IS COMING! We have shaken the regime! But we must not yield or surrender! The fight is not over! We must go to protests in mass numbers. So that the grave discontent with the regime is seen, not just speculated.

FREEDOM is not easy to obtain! And we must fight for it to deserve it! Every day at 6 pm! 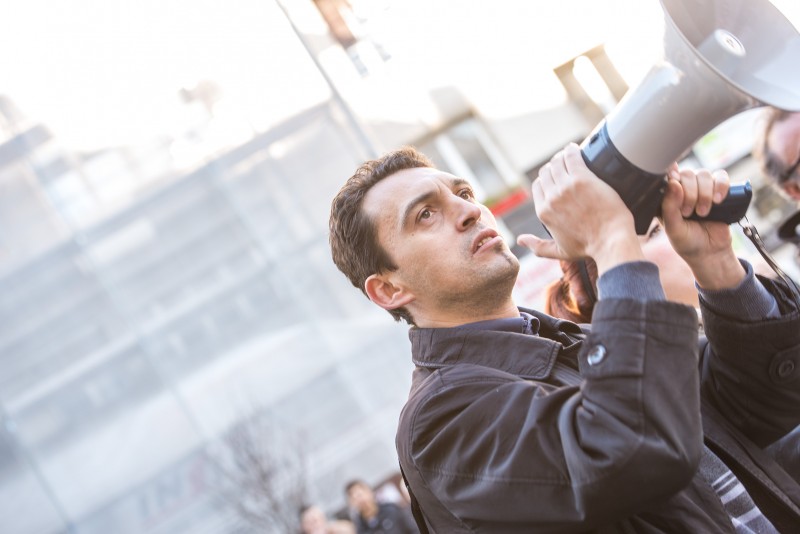 At noon on April 25, after the pair were arrested, Levica organized a press conference in front of the court, and dozens other protesters came to express their solidarity. At the emergency press conference in front of the Criminal Court, Levica condemned the authorities’ actions. According to member Dimitar Apasiev: “This is a question of open political persecution against political opponents, following right after announcements made by a certain civil movement that claimed some parties should be banned, removed from the legal system — something that is already starting to enfold.”

The last bit is a reference to a speech made by a counter-demonstrator from the GDOM movement (which supports the ruling party VMRO-DPMNE), who called for constitutional amendments “banning the work of civil organisations and political parties that are destroying Macedonia.”

Levica demanded that the minister and deputy minister of interior affairs should record the criminal reports but refrain from processing them until the political crisis is resolved. The party members also called on public prosecutors to refrain from requiring arrest for these cases and for judges overseeing the cases to under no circumstances file the criminal charges.

Outrage over the arrests was palpable on social media and seemed to fuel the determination of protesters to gather at 6 pm, in spite of cold and rain, as they have every day since April 12. The sentiment was summed up by activist Mariglen Demiri, who wrote “We have more people than you have prisons.”

In Skopje, a new group announced its presence with a large banner — veterans of the World War II struggle against fascism. Men and women in their 90s marched at the head of the column that walked from the Special Prosecutors’ Office to the Parliament. 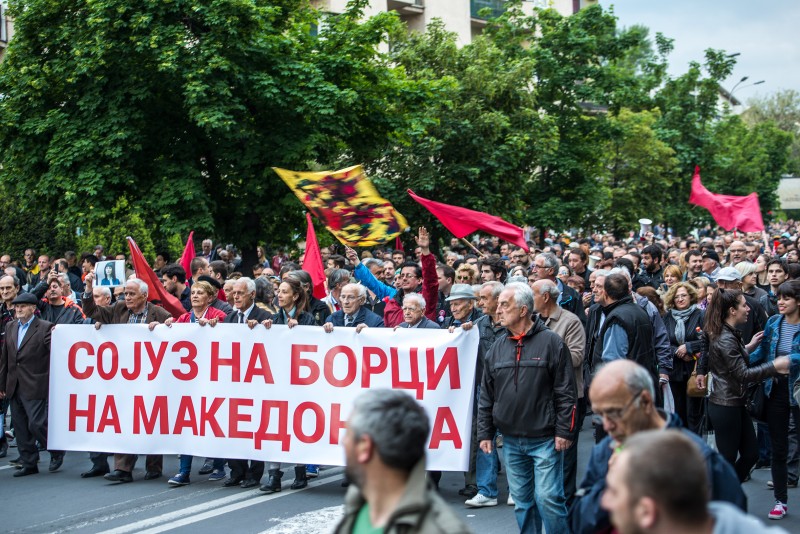 Banner of Union of World War II Veterans at the April 25 protest in Skopje. Photo by Vančo Džambaski, CC BY-NC-SA.

After a round of speeches by activists and artists, thousands of participants took a new route for the daily protest march through the soaking rain. They walked besides the new building of the Ministry of Foreign Affairs, throwing paint on its plaster and marble facade, and then as usual ended their procession in front of the government. 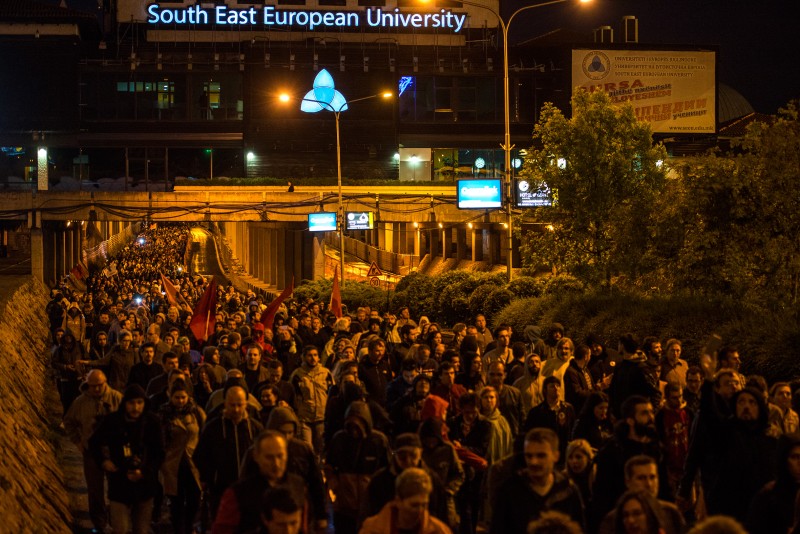 Protesters marching through an underpass in Skopje on April 25. Photo by Vančo Džambaski, CC BY-NC-SA.