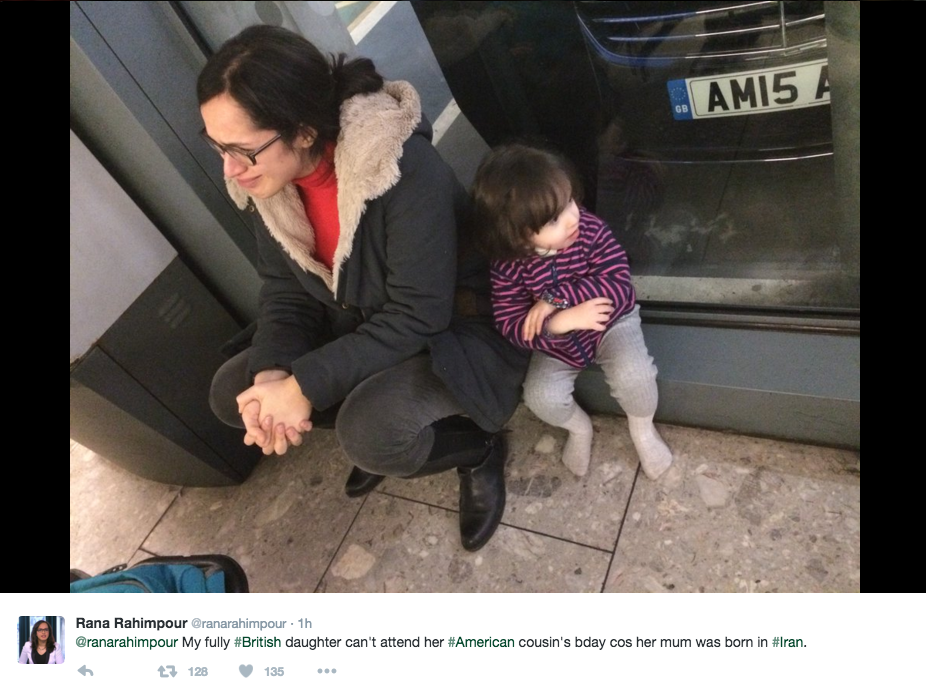 BBC Persian Reporter Rana Rahimpour posted tweets Tuesday night explaining how her and her daughter were prevented from flying to the United States because of Bill H.R. 158. Photo from Rahimpour's Twitter.

Twitter went into overdrive for many Iranians Tuesday night in response to BBC Persian reporter Rana Rahimpour‘s tweets after she was stopped from boarding a flight from the U.K. to the United States.

3 days after lifting #Iran sanctions, #US denied #ESTA/visa waivers for me and another 2 #British citzns cos we have Iranian nationality too

Rahimpour explains in her tweets that she was held back because of the new restrictions enforced by the Visa Waiver Legislation (or Bill HR 158). The legislation was passed on 18 December with congressional approval and President Obama's signature. As a result, it requires citizens of the 38 member countries (including all European Union countries) currently exempt from obtaining visas to enter the United States to request visas if they have travelled to “terrorist hotspots” such as Iraq and Syria or countries “supporting terrorism” such as Iran and Sudan.

HR 158 stipulates the following regarding individuals who will not be exempt from the waiver program:

The bill itself indicates that the legislation will go into effect as of 1 April, 2016, and the official website for the US Electronic System for Travel Authorization (ESTA) makes no reference to the new bill.

Rahimpour explained her surprise at discovering the bill was already in effect, with a confirmation from ESTA, keeping her from her flight.

@ranarahimpour Though most people think new #US travel restrictions not effective until April, #ESTA told me they are already in place.

In what appeared to be an emotional tweet, Rahimpour explained her daughter, who is a full British national, was kept from her cousin's birthday in the United States because of the restrictions placed on her as an Iranian dual national.

@ranarahimpour My fully #British daughter can't attend her #American cousin's bday cos her mum was born in #Iran. pic.twitter.com/8Rt1aHLlTD

Prior to this incident many had already taken to social media to express discontent at this misplaced targeting of Iranians and Iran, as the bill was invoked in the wake of the threat represented by Daesh (also known as ISIS), the brutal Al Qaeda offshoot that has taken over swathes of Iraq and Syria. While Iran does maintain strong ties to groups designated by governments as terrorists such as Hezbollah, they are also one of the countries that have been fighting Daesh since early on in the conflict.

The reactions to Rahimpour's ordeal have already started to pour out.

If not clear discrimination against Iranians… then what is this? @JohnKerry @ranarahimpour #HR158

Earlier this year, the organizers of a Quantum Computation Conference at Iran's Sharif University of Technology cancelled an international conference hosting European academics in response to the new American legislation.

..in order not to put our international invitees and participants, and the conference itself, in an inconvenient and undecided position because of the new US bill concerning the visa-waiver program, which puts restrictions on travelers to Iran.

Iranian officials have already condemned the bill, with Iranian Foreign Minister calling it “absurd,” and other officials recognizing the detrimental effects it could have to tourism and commerce in Iran. Prior to sanctions related to Iran's nuclear program being lifted, U.S. Secretary of State John Kerry assured Iranian officials there were multiple ways to prevent H.R. 158 from affecting business with “potential tools” such as specially issued business visas.