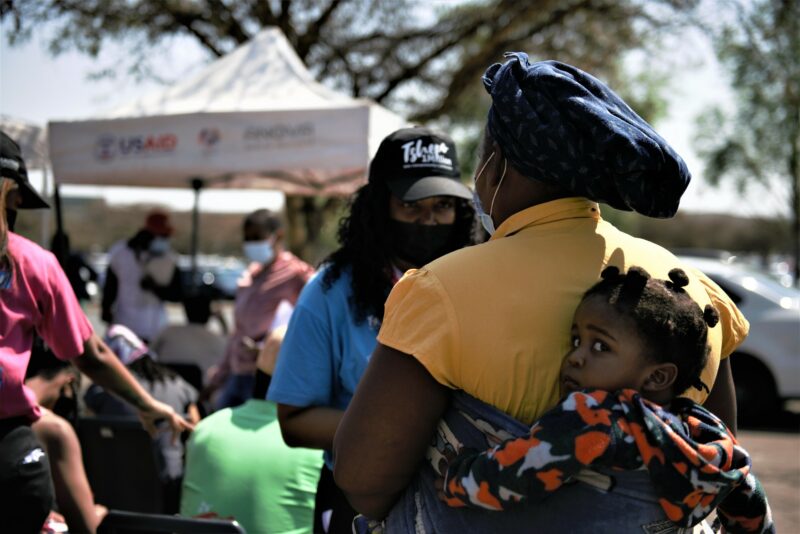 A mother getting vaccinated in South Africa. Image by USAID/South Africa, taken on September 3, 2021 (CC BY-NC 2.0).

On November 25, South African health minister Joe Phaahla announced the detection of a new COVID-19 variant in the country’s Gauteng province. The B.1.1.529 or Omicron COVID-19 variant was first sequenced in Botswana by Dr. Sikhulile Moyo, a Zimbabwean scientist based there.

Since then, Western nations have re-echoed colonial labeling of Africa as a diseased continent by racing to ban flights from what they perceive as COVID-infested Southern Africa. At the same time, the entry requirements for people from Western nations remain the same — even if they have significantly higher case numbers than African countries.

These prejudices towards African countries caused outrage from African governments and citizens.

South African President Cyril Ramaphosa described them as “unjustified and unfairly” discriminatory. The flight bans on African countries have only reinforced the dominant Western narrative that “only disease and chaos comes from Africa,” insists Dr. Yolande Bouka, an assistant professor of political studies at Canada’s Queen's University. This is despite the fact that “the continent has fared better despite vax apartheid and limited resources. And most importantly erasing Africa’s contribution towards fighting COVID-19,” Bouka tweeted.

Western outlook on health services in Africa remains the same as it was in the 19th century, a “project of colonial conquest and domination,” according to historian Jessica Pearson-Patel. Journalist Samira Sawlani further asserts in a tweet that, “Colonialism was built on and reinforced through the idea that the west is superior to those in countries they colonised. That hasn’t changed. It just looks & plays out a little different.”

Not only did travel restrictions themselves earn criticism, but also the language used to describe the discovery and spread of the new virus variant. In a tweet, South African citizen Graeme Codington points to the role of media and how “lazy journalists” get it wrong. “It is not a surprise that our medical system is one of the first to identify new Covid variants. (…) What is a surprise is how lazy journalists write headlines,” Codington writes.

The United States’ double standard was most obvious. On the one hand, the U.S. Secretary of State said that South Africa's transparency in sharing information about the Omicron variant “should serve as a model for the world.” Yet, the U.S. was one of the first Western nations to ban flights from southern Africa, ostentatiously backed by “science,” according to a November 26 tweet by President Joe Biden.

After two cases of the new variant were detected in the UK, six African countries were placed on their red list. Two days later, four other countries in Sub-Saharan Africa were red-listed. People from South Africa, Botswana, Lesotho, Eswatini, Namibia, Zimbabwe, Malawi, Mozambique, Zambia, and Angola are now banned from entering the UK.

countries banned because of the omicron variant
vs.
countries with confirmed omicron cases pic.twitter.com/7HAxx03KfE

One day later, the EU followed the UK. “The European Commission has today proposed to member states to activate the emergency brake on travel from Southern African and other affected countries. All air travel to and from these countries should be suspended until we have a clear understanding of how serious the mutations of this new variant are,” said Ursula von der Leyen, president of the EU commission.

Since then, Australia and Thailand joined the U.S., Brazil, and Canada in imposing travel bans from the southern African countries. Japan, Israel, Morocco, Oman, and Jamaica have followed suit.

Meanwhile, the numbers of infections in Europe are at their highest level since the beginning of the pandemic. This surge is driven by a mix of factors, including vaccination refusal, the Delta variant, and relaxed restrictions. Even though the new variant was detected in several European countries, and in Canada, Israel, Australia, and Hong Kong, travel bans are so far only imposed on African countries.

Similar categorisation of Africa as the seedbed of disease was manifested at the height of the Ebola epidemic in 2014. This was exemplified by the Newsweek magazine cover which featured a photo of a chimpanzee with the headline: “A Back Door for Ebola: Smuggled Bushmeat Could Spark a U.S. Epidemic.”

But this was not just a gaffe. Rather, it represents what Washington Post journalists Laura Seay and Kim Yi Dionne, describe as the “long and ugly tradition of treating Africans as savage animals and the African continent as a dirty, diseased place to be feared.”

It is ironic that a red alert has been placed on African countries who lead the global effort in identifying this variant, particularly when several African countries imposed stricter measures, including the compulsory wearing of masks in public, to curb coronavirus. These measures were already being enforced in most parts of Africa while the U.S. was embroiled in partisan ideological politics to wear or not to wear masks. A joint report from the House of Commons science and health committees affirmed that the UK performed “significantly worse” than many other countries at the early days of the pandemic due to “group-think” among scientists and government officials, leading to over 150,000 deaths.

While Europe and the U.S. blame Africa for spreading the virus, their policies undermine the global COVID-19 response. The West’s vaccine nationalism emphasizes the exclusive reliance on private companies with patents to the COVID-19 vaccine together with the dynamics of a free-market system to determine who gets the vaccine. In simpler terms, this means that countries with more money will get the vaccine.

The U.S. and EU successfully placed advance orders for millions of the vaccine, leaving very little for less developed countries. The consequences, as now evident with the Omicron variant, is that Europe and the U.S., which scrambled to inoculate most of their population ahead of less wealthy countries will continue struggling to contain the virus until other countries are fully vaccinated as well.

Despite the vaccine nationalism of Western countries, Africa seems to have fared better in curtailing the spread of COVID-19. As of November 29, Africa has recorded 221,635 deaths as compared to the 1,104,494 in Asia, 2,341,205 in the Americas, and 1,491,599 in Europe according to the European Centre for Disease Control. In addition, “the case-fatality ratio (CFR) for COVID-19 in Africa is lower than the global CFR” going by a study conducted by the Partnership for Evidence-based Response to COVID-19 (PERC), explains why the fatality rate was lower in the continent.

A study by public health scholars Dr. Itai Chitungo and Dr. Mathias Dzobo asserts that it is “not accurate to offer limited testing capacity, poor health systems, and under-reporting as the only explanations for the lower numbers of COVID-19 cases reported in Africa.” The continent’s young population, favourable climate, and quick action contributed to stemming the tide against the pandemic.

Another explanation for the low COVID-19 fatality rates in the continent was given by Dr. Olúwatómidé Adéoyè, a drug development scientist based in Lisbon, Portugal. Adéoyè told Global Voices via Twitter DM chat that blood tests known as serological surveys that were conducted in south-eastern, south-western and north-western Nigeria “suggest about 25 to 50% already got COVID. When you map this on age and comorbidity with adjusted risk of death or hospitalisation, it makes sense that we [Nigerians] have not been that affected.” 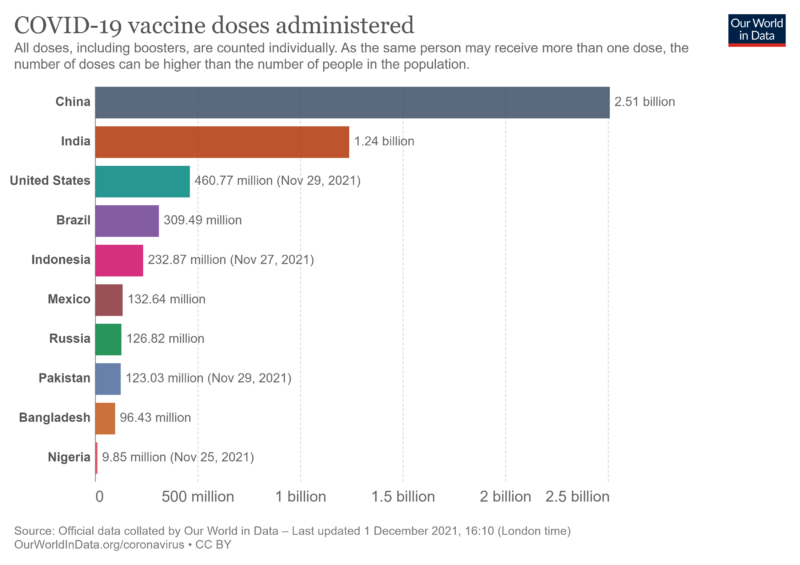 The rate of vaccine administration by continent as at November 2021. Image credit: Our World in Data.

Dr. Ayoade Alakija, member of the African Union’s Vaccine Delivery Alliance, blamed the West for hoarding vaccines and refusing to waive patents. “It is a result of hoarding by high-income countries of the world and quite frankly, it is unacceptable. These travel bans are based in politics and not in science,” Alakija said.

As of March 2021, COVAX, whose mandate was to ensure the fair and equitable rate of coronavirus vaccination in every country, allocated more than 500,000 doses to the UK which has already achieved a high rate of vaccination coverage. On the other hand, Botswana, which had not started its vaccination drive, was assigned a meager 20,000 doses of vaccine.

African countries face challenges distributing vaccines due to storage problems, government bureaucracy, hesitation to take the vaccine, and mis/disinformation about the vaccine. But the hesitation to take COVID-19 vaccines is not exclusive to the continent. A study showed that vaccine hesitancy is higher in wealthier nations like Russia and the U.S. This position was confirmed by another study by pathology professor Malik Sallam, which showed that Italy, Russia, Poland, the U.S., and France had low rates of COVID-19 vaccine acceptance.

Scientists weigh in on the Omicron variant

The U.S. president's claim that his African travel ban was based on “science” is contradicted by many reputable scientists.

The World Health Organization (WHO) said that it is still “not yet clear” if Omicron spreads faster or causes more severe disease than the Delta COVID-19 variant. Dr. Amesh Adalja, an infectious disease professor at Johns Hopkins University, told the Associated Press that the “knee-jerk” travel ban by Western politicians was counterproductive because countries already have rapid tests and vaccines.

Caroline Colijn, a mathematician and epidemiologist at Canada’s Simon Fraser University, asserts that “the omicron variant has already been detected in countries outside of the targeted region.” On November 29, six Scottish nationals with no travel history tested positive for the Omicron variant. Similarly, the new variant was already present in the Netherlands by November 19, the National Institute for Public Health (RIVM) said.

A guy who tweeted the following when Trump banned travels from Europe/China now bans travel from African countries. The irony is the so-called ‘liberal media’ provides ‘scientific context’ for Biden's decision while presenting Trump's decision as a racist. Journalism is broken pic.twitter.com/FF1SAPQ14X

Rather, scientists at Johns Hopkins University have shown that the country that first reports the result of COVID-19 sequencing on the new variant “may not be the origin.” Dr. Jennifer Nuzzo, senior scholar at the Center for Health Security at Johns Hopkins University further asserts that “penalizing countries that report variants may have a chilling effect on surveillance for variants.”

Besides, the Africa Centres for Disease Control and Prevention says that  “imposing bans on travelers from countries where a new variant is reported has not yielded a meaningful outcome.” Consequently, it is “naive” of countries like the U.S. and the UK to believe that imposing travel restrictions will “prevent the importation” of the new Omicron Covid variant, vaccinologist Professor Shabir Madhi told Channel 4 News.

Tedros Adhanom Ghebreyesus WHO chair affirms that “the more we allow the COVID-19 virus to circulate, mutate and become potentially more dangerous,” the less safe our world becomes, irrespective of the location, rate of vaccination, and affluence of the country.