Hope amid scarcity and fear: Cuba after July’s historic protests

Cubans still do not know what happened to arrested protestors 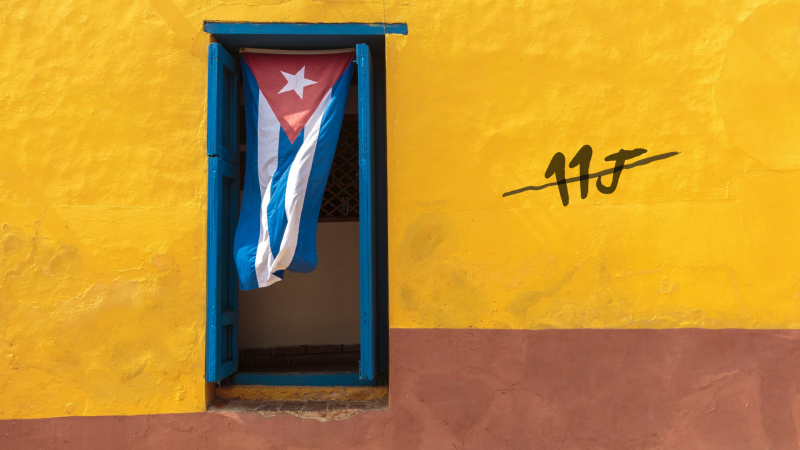 Image made by Giovana Fleck/Global Voices.

This article was written by an @author@ in Cuba under the pseudonym Luis Rodriguez to protect their anonymity. The accompanying Cuban music playlist below is courtesy of Global Voices and Spotify.

It has been over two months since unprecedented protests broke out on July 11 in Cuba, when people took to the streets by the thousands to demand freedom of expression and basic food and medicine needs. Since then, simmering discontent has only deepened within the Cuban collective consciousness about issues that, left unaddressed by the government, worsen by the day.

Cubans on the island and their diaspora continue to question why the social uprising of “J11″ that took the regime by surprise did not lead to the changes they wanted. The brutal repression of the protest has created widespread fear among those who have tried to return to the streets to speak out. The state maintains absolute control of the Cuban media and has instructed all available resources to control the narrative about J11, calling those who protested “delinquents and terrorists.”

So, what has changed in Cuba? It is a question repeatedly asked by millions of Cubans who continue to bear the brunt of nationwide food and medicine shortages, nonstop blackouts, and perennial repression by a regime attempting to impose its ideology on people less likely to accept it than before.

According to the US-based human rights NGO Cubalex, there are still 437 protestors from the total 949 arrested that are still being detained as of this publication’s date. Additionally, “only 62 people have been tried, and 53 have been charged with criminal offense[s] for public disorder, although there are additional charges of contempt, resistance, criminal instigation, and criminal mischief, according to the official newspaper Granma,” but those are the official figures released by international media. Essentially, no one in Cuba is able to access firm data on arrested persons.

The driving factor behind misinformation in this regard lies in that, unlike other countries, the Cuban government does not allow penal or judicial institutions to be monitored by organizations or NGOs like Amnesty International and Human Rights Watch.

Therefore, any scant information of relevance that does reach Cubans comes through Cuban sources, such as the Cuban Observatory for Human Rights and other dissident associations, which operate under the law with little access to reliable information on the matter. This explains how we know so little about the detainees’ situation.

The majority of arrested civilians are a mix of ordinary people and opposition leaders such as the artist Luis Manuel Otero Alcántara. Alcántara was the first leader of the San Isidro Movement, and was released after being confined to the Calixto García Hospital for a prolonged stay, but has been held in a maximum security prison after participating in the protests, and this is where he remains today. Rapper Maikel Osorbo, who starred in the music video Patria y Vida, had been arrested before the J11 protests and is still awaiting trial.

Other artists and intellectuals did not remain on the sidelines. In one of the lesser-known events, a group of artists went to the ICRT (Institute of Cinema, Radio and Television) and demanded a legitimate right to appear on television to provide transparent information to the population about the events. They were violently repressed.

Another case is of José Daniel Ferrer, leader of an organization known as UMPACU in Santiago de Cuba, who is considered the most important leader of traditional opposition. He was imprisoned in Cuba on several occasions, this time he was sentenced to the remaining four years of a previous sentence for an alleged assault.

In post-J11 Cuba, the regime is desperate to squash social discontent and change its image to the world by offering so-called places for dialogue with different parts of civil society, such as artists, religious, and popular neighborhood leaders. There is a noticeable absence of dialogue with any sector of political opposition, in an atypical stance when compared with other countries—even Venezuela, one of Cuba’s few political allies.

According to Julio Cesar Guanche, in order to undertake this critical dialogue with civil society, the government must “review the judicial and legal situation of detainees, summary proceedings, and recognize the right to peaceful demonstration.” Failure to act on it would continue being problematic for the same dead-ended possibility of dialogue that the Government is attempting to develop.

The state has tried to control the crisis through the internet by lowering the cost to make the internet more accessible, while contradictorily enacting the new Decree Law 35, which restricts the flow of information on social media. This decree states that any citizen who uses social media to promote false news and incite violence can be prosecuted. Many in Cuba associate this decree with the government’s torturous effect of attempting to apply a gag rule to suffocate Cubans’ freedom of expression.

In the face of this frustrating scene, one could conclude that this awakening of the Cuban nation was fruitless, and it failed to bring about the changes we demanded. But the historical lessons of J11 offer us insights. Cubans came out en masse throughout the island for the first time in decades to assert their rights, the vast majority of it done in a peaceful manner. In the words of the Cuban political scientist and historian, Armando Chaguaceda, “Cuba understood that it had the right to have rights.”

There will be another march on November 20 to demand the release of political prisoners and to advocate for further steps towards democracy. Nothing and no one will be able to stop the historical trajectory of a nation’s people who collectively understood at J11 that the only way to freedom was through peaceful political transition.