Citizen journalists shared what they witnessed during the violent week 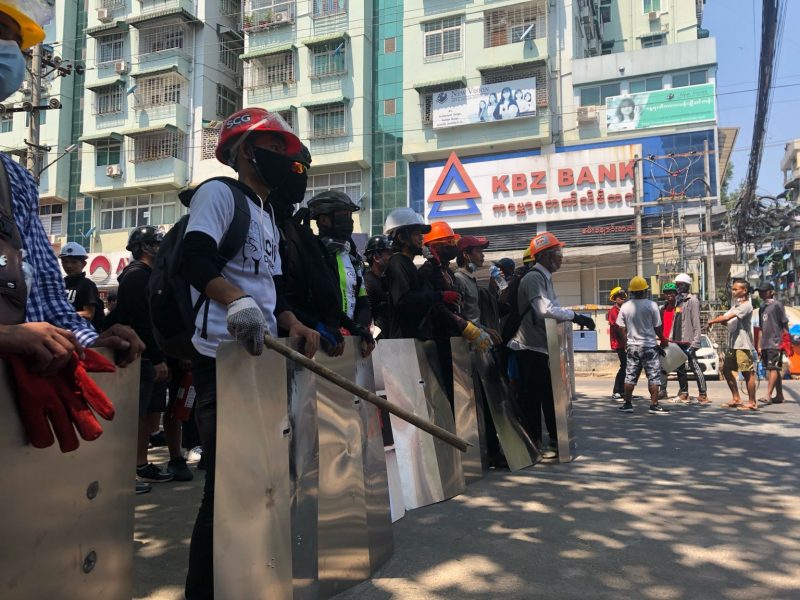 Anti-coup protests continued in Myanmar despite the use of violence by security forces. Photo shared by citizen journalists, used with permission

The month of February ended with at least 18 people being killed by security forces in a nationwide crackdown targeting anti-coup protesters and even journalists. The attacks continued during the first week of March, turning many communities into “war zones” and leading to mass arrests. Despite the use of violence by police and Tatmadaw (armed forces) against unarmed civilians, protests continued to gather support as activists pressed for the restoration of democracy.

The Tatmadaw staged a coup on February 1 and detained the country’s elected leaders. The military government, however, immediately faced strong opposition from citizens who organized various forms of resistance while pleading for UN intervention.

The biggest protest took place on February 22 through a general strike that paralyzed city centers across the country. Since then, security forces have resorted to more violent methods in suppressing the anti-coup movement. Dozens were killed in police operations on February 27, February 28, March 3, and March 5.

Citizen journalists told Global Voices about what they witnessed during a protest at Baho road in Sanchaung on March 3:

A glimpse of the tension between police and protesters on March 3 at Baho road in Sanchaung. Video shared by a citizen journalist pic.twitter.com/uqakmrmKsd

Police fired two smoke bombs toward the crowd so we shoot fireworks to scare them and you can see fireworks exploding in the video.

Citizen journalists are playing a huge role in the way the world is watching the atrocities unfold in Myanmar. Millions of videos and photographs are being shared on social media despite the high risk. My piece is now airing on BBC World News and BBC Burmese. pic.twitter.com/b65qZSOSR2

Workers are among the most active participants of the protest movement:

Its 1200.
As I requested them to stay under shadow, workers replied “its ok, we r waiting a shadow under sun”.

I admire their dedication.
With them, I hve guts to accomplish anything.

On March 7, our source saw military personnel randomly shooting and setting off sound bombs in neighborhoods.

To combat this, people are closing all their lights and community guards (like neighborhood watch) are asking people to switch off lights in order to not attract gunshots.

Residents also mocked the police and military by shouting “Happy New Year” when sound bombs were used in their communities:

In response, people were shouting happy new year to mock the military's tactics. Another wonderful example of the resilience and humor the people of Myanmar have maintained since the start of the coup.

Terrorist junta’s soldiers tried to scare people by shooting guns around the neighborhoods at night ?

In recent days, the police and military were seen deploying troops in schools, hospitals, and monasteries. Our source said:

Seems like military is also trying to station themselves among civilians, making their bases in hospital, monasteries and schools.

Security forces have stationed inside universities/schools/public hospitals among civilian quarters ahead of Monday’s general strike.

The public is totally against it, claiming those areas are neutralized zones as per Geneva Convention. #WhatsHappeningInMyanmar

Several protesters were able to share their stories with journalists. Ye Myint, a 27-year-old Sanchuang resident, recalled how they acted during the clash with the police:

Our tactic now is simple: If they shoot, we run. Then we reassemble.

Another protester described her experience during a brief detention:

I hid my phone before entering the transport vehicle and posted on my Facebook that I was arrested, so my folks would see it. Upon arrival, men were sent directly into the cells and women were detained in a lecture room next door. Then the policewomen searched us again, and my phone was taken away.

We were also interrogated by soldiers the next day. They took photographs of us from the front and both sides, like you see in the movies.

They were soon released with a warning that they will be charged if they continued to join protests.

The funeral for a young martyred protester was attended by thousands of sympathizers:

Mourners attend the funeral of 19-year-old Kyal Sin, who was killed during anti-coup protests in Mandalay. Known as “Angel,” she was one of millions who joined protests across Myanmar after the military seized power and ousted Aung San Suu Kyi and other elected leaders. pic.twitter.com/oEtkbIewSK

After facing very brutal and violent crackdown by terrorist junta today, people in North Oakkala defied the curfew and came out to light candles to pay respects to the fallen martyrs. pic.twitter.com/JorCbWwOCu

The death of protesters emboldened fellow activists to continue fighting for democracy:

Its been a long day. My eyes swollen, my heart still aches for we lost innocent young souls but at the end of a day, I question myself, “Do we hve options?”

And I gotta wipe tears & get on streets again tomorrow. https://t.co/6bJYuOZ8a3

Nighttime raids and arrests were conducted on March 6 and 7. Among those arrested was the father of an elected official:

My father was beaten up while he was being taken away. The soldiers and police destroyed our father’s house.

Over these few days, I developed a deep admiration for these young protesters. Not just because of their bravery, but also because of their skill; each day, as they gained more experience, their tactics improved. The police simply couldn’t crush them; each time they advanced, the protesters melted away. If the police withdrew, they returned to the same spot; if the police stayed, the protesters simply moved to a new location. They used social media to study the situation and work out where they should go next.

Kyaw Zwa Moe of The Irrawaddy acknowledged the fighting will of the young protesters: