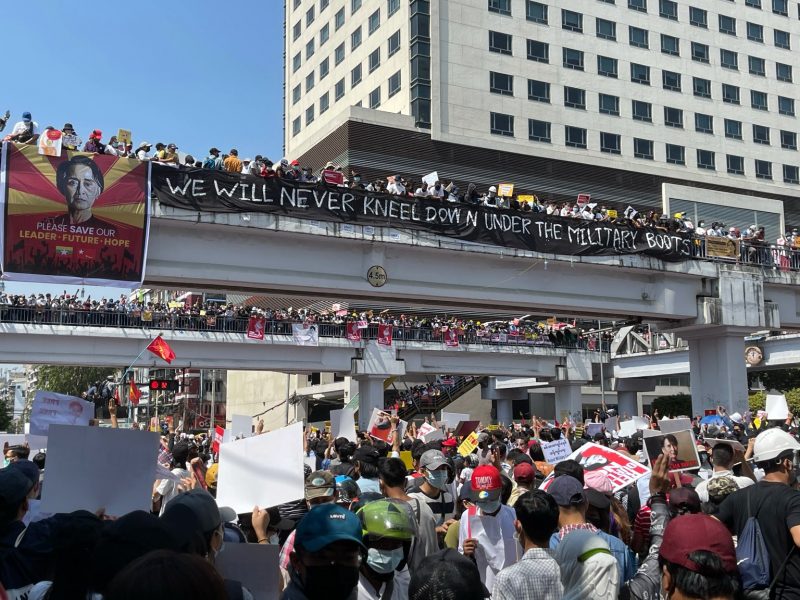 Myanmar’s military authorities have banned public assemblies but this has only encouraged protesters to devise new ways of expressing opposition to the coup.

After the military grabbed power on February 1, a civil disobedience movement was launched which encouraged the public to stop going to work, boycott businesses owned by generals, and join anti-coup protests.

Medical health workers were among the first to support the civil disobedience movement by resigning from their posts. Many continued to work at hospitals but they wore red ribbons as a sign of protest against the military government.

This was followed by community protests which featured the banging of pots and pans to create noise and symbolically cast away evil spirits. A resident explained the popularity of this form of protest:

Banging pots and pans has continued until today, and it lasts about 15 minutes from 8:00 pm to 8:15 pm. Though this mode of campaign may seem insignificant, it ensures that all citizens can participate and express their voices peacefully and safely without having to leave their houses.

How protesters are creatively blocking roads

Many have observed the active participation of civil servants such as teachers, health workers and forestry officers in protests across Myanmar. Protesters have used ingenious methods to stop traffic and prevent government personnel from reporting for work. Kyaw Zwa Moe, editor of the English edition of The Irrawaddy, writes about this:

At the Myaynigone intersection, just a few miles from Sule, protesters helped pick up onions and gains of rice from the asphalt road, where someone had “dropped” them. Dozens of protesters picked up each onion and grain of rice, one at a time, while police watched over them. The purpose was to stop the traffic—as they had during the “car breakdown protest” and the “slow-motion drive protest” to create traffic jams in support of the Civil Disobedience Movement (CDM), which is aimed at preventing government staff from going to work.

‘Broken down’ cars in Myanmar’s biggest city Yangon block streets and confound police in the latest tactic by protesters opposed to a military coup. #WhatsHappeningInMyanmar pic.twitter.com/tvIXgjc50l

Even trishaws (three-wheeled vehicles) have been deployed in the campaign:

In an act of disobedience, drivers across Yangon left their cars in the middle of roads with the hoods up and joked that their engines had broken down.

This morning, some trishaw drivers are launching “trishaw breakdown campaign” in Yangon to block the movement of troops. pic.twitter.com/awMoLkTVCC

A resident added more details about the “Onion Pick-up” campaign:

Basically, protesters intentionally drop onions in the middle of busy roads, and everyone helps pick up the onions, and put them in the (broken/bottomless) bags. This way, the police cannot claim that protesters are illegally blocking the roads.

Demonstrators pretend to pick up onions dropped on the street in an attempt to slow traffic and block roads during a protest against the #militarycoup, in #Yangon, #Myanmar, 19 February 2021. EPA-EFE/NYEIN CHAN NAING pic.twitter.com/URK5NQuoZ3

Slowing down traffic is also done through the “Tying Shoelaces” campaign:

World's first crosswalk protest in Yangon??
Protesters are crossing through crosswalks in Circle lawfully at Myay-Ni-Kone Junction and slowing down the traffic
But literally they are obeying laws
Literally,this is Civil obedience movement?#WhatsHappeningInMyanmar #Feb18Coup pic.twitter.com/FVLDbLULgu

#Myanmar anti-#military government protesters made their mark in #Mandalay wanting all to see their opposition against the #militarycoup since Feb 1. Am told this is seen on 73rd street in Mandalay. Pics by @tonywumm #WhatsHappeninglnMyanmar pic.twitter.com/jw3iT0B2LC

Organised, peaceful and creative. A selection of some of the banners, street art and slogans which have cropped up as part of the anti-coup protests in Myanmar. So much effort has gone into some of these pieces and now the message they hold are being projected around the world. pic.twitter.com/erRFafSHvw

Protesters have also initiated actions aimed at undermining the military-controlled bureaucracy. One of these is the “Lottery boycott” campaign.

The incomes from lottery directly go into government funds just like other taxes. So we stop buying lottery tickets to prevent our taxes from going to the military.

The “curse campaigns” are done to name and shame generals, especially Commander-in-Chief Min Aung Hlaing. Related to this, the “supernatural campaign” involves fortune-tellers and spiritual leaders who cast spells on superstitious military generals.

The “Lets’ report pro-military Facebook pages” is an online campaign that encourages Facebook users to report dubious pages spreading misinformation in support of the coup.

Only three weeks have passed since the coup but protesters have already used various creative methods to express dissent. Military authorities have recently resorted to violence but this has only encouraged more people to join the protests, as seen in the February 22 general strike, which mobilized the biggest anti-coup protests across Myanmar.