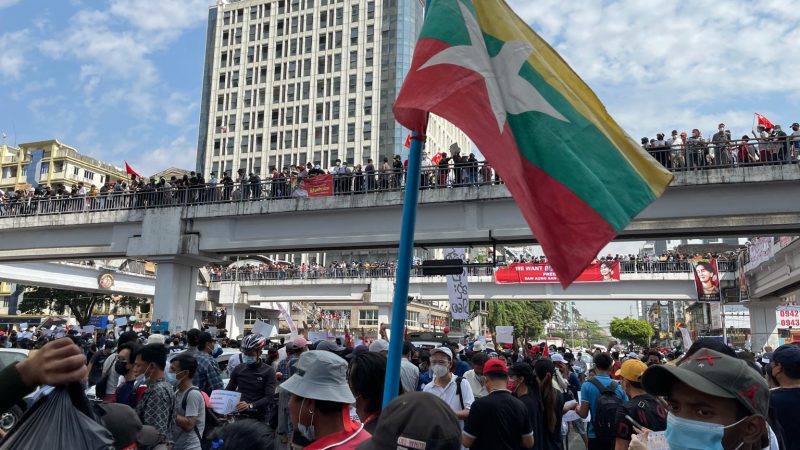 Massive anti-coup protests have been organized across Myanmar despite the restrictions imposed by the military government. Photo supplied to Global Voices by a citizen journalist who did not wish to be identified.

Myanmar’s military grabbed power on February 1, after it accused the ruling party, the National League for Democracy (NLD) of conspiracy and electoral fraud in the November 2020 general election.

Previously, Myanmar lived under a military dictatorship for several decades until political reforms led to civilian rule in 2010. During the historic 2015 election, the pro-democracy NLD defeated a military-backed party although the Tatmadaw, as the armed forces are called in Myanmar, are assured of representation in the Parliament, Cabinet, and other branches of government as stipulated in the military-drafted 2008 constitution.

The 2020 election was again dominated by the NLD, yet the military contested the results citing alleged massive irregularities in the roll of voters, and eventually arrested leaders of the NLD and top officials of the government. The military has vowed to conduct another election after implementing reforms.

The coup has been rejected by NLD supporters and citizens who consider the actions of the military a reversal of the country’s democratic transition. A civil disobedience movement was immediately launched to oppose the coup. Medical front-liners were among those who supported the campaign and community protests were organized every day despite the ban on mass gatherings.

The internet was disrupted several times, and the military has introduced a cybersecurity bill that allows authorities to block online content. A general strike was held on February 22, which succeeded in gathering a record number of participants across the country. On February 28, a nationwide crackdown led to the killing of at least 18 protesters. Hundreds have been arrested.

Global solidarity for Myanmar continues to grow stronger although the junta seems unfazed and determined to cling to power.

Stories about The junta seizes Myanmar again. Will democracy prevail?

Inside Myanmar: Testimonies of survival and resistance

"The military junta could only terrorize our country but they can't rule. They could shoot, kill and arrest our young heroes called 'Spring flowers' but they can't avoid Burma's Spring."

Missed the live stream of the April 22 Global Voices Insights webinar on Myanmar? Here's a replay.

A Myanmar blogger has documented the escalation of violence in Myanmar and the continuing defiance of anti-coup protesters in the second half of March.

"When we see somebody, and we raise three fingers, we know the movement is still alive. There is still hope."

Images and videos of the brutality unleashed by Myanmar's military are widely shared on social media. Despite the terror tactics, pro-democracy forces are fighting back.

Myanmar's security forces have become more brutal in suppressing the anti-coup movement but protesters have devised creative and unusual tactics to survive and avoid the riot police.

"Exchanges among activists could help reflect on the inadequacy of local protests and develop a wider horizon in understanding the significance of the pro-democracy movement in Asia."

"These shooting[s] are totally unacceptable. They are not dispersing the protests. They are just murdering the people with violence."

‘This goes way beyond brutality': Myanmar coup and the military's violent suppression of democracy

Myanmar protesters are being killed for resisting the military government. As violence continues to worsen, many are appealing for urgent UN intervention.

In the streets and online, Myanmar's citizens unite in creative opposition to the military junta

"The protests have also been highly inclusive, welcoming people representing a diversity of professions and identities, including people from a range of religious faiths and from the LGBTQ community."

"They are so determined to see the death of the military dictatorship, there is simply no way their movement can die."

Coup and resistance in Myanmar: A timeline of the first month under the 2021 military junta

From the coup to violent crackdowns and arrests, February 202a was a month of turmoil in Myanmar. But the people are fighting back.

“If we don’t resist out of fear, we would be enslaved by them. I believe others will move the protest ahead even if I am taken down.”

"Like all other Myanmar citizens, artists want to contribute to the national struggle... artists can assist other protesters with our artworks..."

Only three weeks have passed since the coup but protesters have already used various creative methods to express dissent.

"If we oppose the dictatorship, they might shoot us. But we have to oppose dictatorship. It’s our duty. That’s why so many people are coming out today against them."

There's also speculation that the recurring power outages in Myanmar in the past few days are related to the testing and setup of Myanmar's version of The Great Firewall.

'It can be expected that the true aim of the bill is to repress freedom of expression online and ban social networks.'

"Today the people of Myanmar are rising up against the military regime, demanding democracy. This is no longer a protest. It's an uprising."