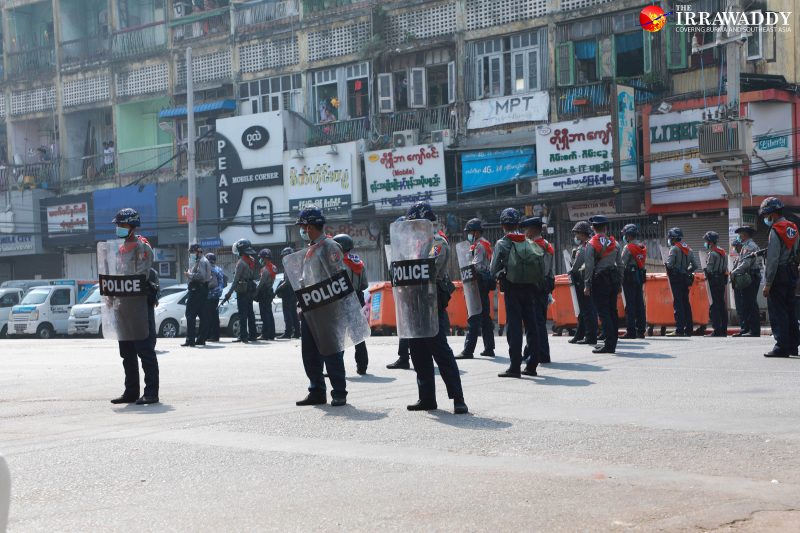 Riot police in downtown Yangon on February 28/The Irrawaddy

This article was originally published in The Irrawaddy, an independent news website in Myanmar, and is edited and republished on Global Voices as part of a content-sharing agreement.

His call on the popular social media site, for UN intervention to stop Myanmar’s military dictatorship, turned out to be his last post.

On Sunday morning, the 23-year-old network engineer reinforced the call—with his life.

He was shot dead by Myanmar security forces while joining a protest against the country’s military regime in Yangon’s Hledan. A live bullet pierced his chest.

With the deaths of more than a dozen people, including Nyi Nyi Aung Htet Naing, Myanmar’s anti-military-regime protests turned bloodier on Sunday as security forces fired live rounds on marching civilians across the country.

The escalating state violence was an apparent attempt by the junta to terrorize the people of Myanmar who have been protesting against the regime since early last month. If that was the goal, it failed.

There were more protesters on the streets throughout Sunday despite the presence of trigger-happy security forces. The heavy-handed strategy only served to make people across the country more united in their opposition to the men in uniform, increasing the tension between the regime and the people of Myanmar for the coming days.

Sunday saw the highest protest-related fatalities in a single day since the anti-regime rallies broke out three weeks ago. Fatal shootings were reported in several places across the country—from Dawei in the country’s deep south to Myanmar's largest city, Yangon, to up-country Mandalay and other areas.

Anti-regime mass rallies have erupted daily in Myanmar following a military takeover early last month. While denouncing the military dictatorship, protesters have also demanded the release of their democratically elected leaders, President U Win Myint, State Counselor Daw Aung San Suu Kyi and others detained by the regime. Prior to this weekend, the protests had already seen bloodshed in other parts of the country, including the capital Naypyitaw and Mandalay, where five people, including a 16-year-old boy, were shot dead by riot police and soldiers last week.

On Sunday, people took to the streets in response to the protesters’ call to join Myanmar’s second general strike against the regime. It also coincided with the pro-democracy activists’ request for solidarity from the Milk Tea Alliance, a loose, online coalition of activists largely based in Thailand, Hong Kong and Taiwan using the hashtag #MilkTeaAlliance. The coalition’s name refers to the variety of types of milk tea consumed across the region. It opposes the increasing influence of China.

In Yangon, riot police and soldiers hunted down protesters beginning in the morning, killing at least four people. According to the head of the emergency department of a government general hospital in Yangon, three died after being shot in the head and abdomen.

Out of 19 wounded people we have treated today, 15 were hit with live bullets. Two are in critical condition as they were hit in the throat and abdomen. 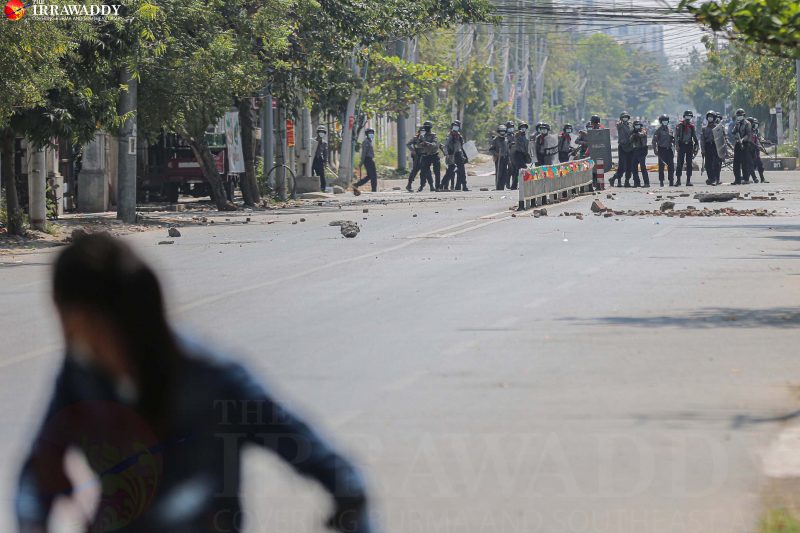 A protest column made up of doctors, nurses, and students from medical, pharmaceutical and paramedical universities in Yangon was attacked by soldiers and riot police in the city’s Yankin Township. Out of thousands of protesters, 211 were arrested and several others sustained shoulder dislocations or skull injuries after being hit with batons. Those arrested had been released in the afternoon, but only after being forced to sign a paper stating they would not join the protests again.

A 30-year-old doctor, who was among those detained, shared their story

They just directly charged on us. Not even bothering to warn us to disperse.

A second-year medical student who gave her name as Wendy was hit in the head with a baton. All she remembered was that her white duty coat suddenly turned red with her blood.

I was too scared to feel the pain at the time.

In the country’s Deep South Dawei in Tanintharyi Region, the deaths and injuries came in the morning.

At least four people were shot dead and around 40 injured in a violent assault by riot police on anti-coup protesters.

At midday, a bystander on a motorcycle died after being shot in the head by police during a crackdown on a protest in Mandalay. Several people, including a youth volunteer helping protesters, were shot and injured. A woman who was just walking down the street was shot into the head and died on the spot in the evening.

Like their counterparts in Yangon, protesters in Mandalay took more defensive approaches when confronted by security forces. Equipping themselves with hard hats, goggles and gas masks, they erected roadblocks with everything they could find to keep the charging riot police and soldiers away. Some brave souls armed themselves with rackets to hit the flying teargas canisters back to security forces while others simply used wet blankets to cover up smoky canisters when they landed.

Protest-related deaths, injuries and arrests were also reported in Bago and Magwe Regions.

Undeterred by the deadly shootings, protesters across the country reorganized and continued their marches and sit-ins in the afternoon. Apparently disturbed and angered by the deaths of their fellow protesters, they shouted anti-regime slogans louder than on the other days.

Anti-regime striker Sithu Aung, a 22-year-old Technological University student who joined the protest simply because he opposed dictatorship, said he also feared the loss of his future if Myanmar was again isolated from the international community under the regime due to sanctions.

If we don’t resist out of fear, we would be enslaved by them. I believe others will move the protest ahead even if I am taken down. 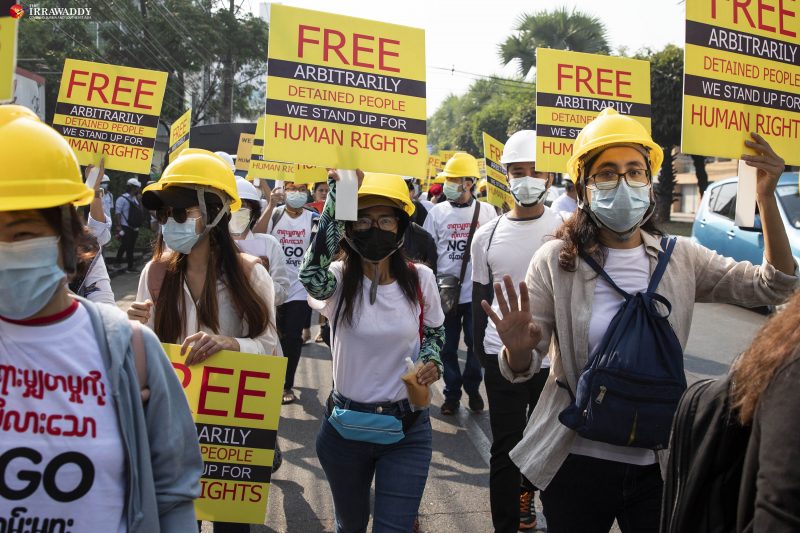 Anti-military regime protesters in Yangon on February 28/The Irrawaddy