The regime in Minsk has run out of carrots, and has only sticks left. 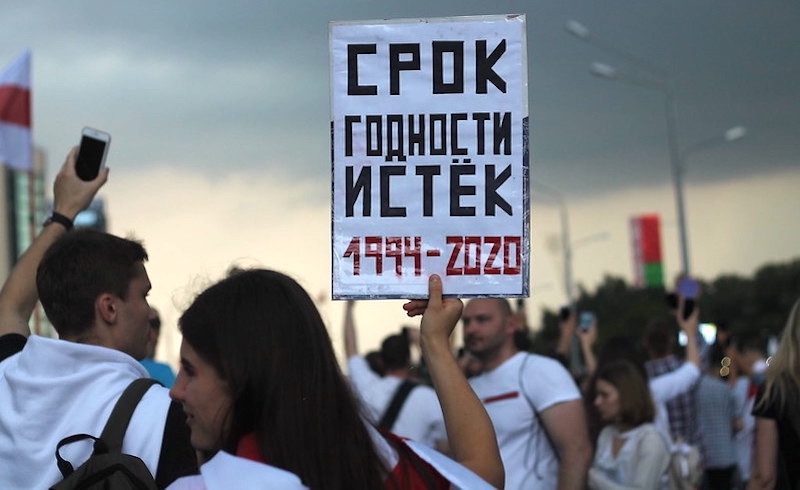 This year, Belarusians have paid a heavy price for resisting Alyaksandr Lukashenka.

His attempt to claim a sixth consecutive presidential term in the August 9 election prompted the largest wave of protests in the country's post-Soviet history. When hundreds of thousands of peaceful demonstrators took to the streets of major cities, the authorities unleashed violence on a similarly historic scale. Security services and police have detained thousands of protesters, at least four of whom have been killed. Protesters have made credible accusations of torture and ill-treatment in police detention, none of which have been investigated by the authorities.

Lukashenka, who has ruled since 1994, made a show of defiance by blaming foreign powers and domestic conspiracies. In late August he was filmed leaving a helicopter near the presidential palace in Minsk, brandishing an AK-47 assault rifle without its magazine. This stunt may have been widely mocked, but it was meant in earnest.

Violence (the threat and its application) appears to have paid off. Sviatlana Tsikhanouskaya, who became the leader of this opposition movement, is fêted in European capitals, where she continues to demand nothing less than Lukashenka's resignation and a re-run of the election which she is widely believed to have won. She continues to inspire protesters in Belarus, though there is a rising sense that their protest has become an end in itself, without a longer strategy in the face of such intransigence.

Lukashenka may have become a pariah, but he remains a pariah in office. And as winter descends, he has regained the initiative. It is far from certain that he can keep it.

Opposition figures, many of them members of the Coordinating Council, are either in jail or exiled. A leaderless protest may have tactical advantages in evading repression, but offers little in the way of long term strategy. Labour unrest, a genuinely cross-class form of civil disobedience which spread to several large state-owned concerns, has decreased. Moreover this month, the country's borders were completely sealed — ostensibly due to the COVID-19 pandemic, though the economic impact of political emigration may be another rationale.

If there are cracks in the regime, they are not yet wide enough to cause collapse. While some members of the security services have indeed resigned, there are as yet no high-level elite defections. As the Polish analyst Kamil Kłysiński writes, Lukashenka is now promoting members of the security services to civilian administrative roles. In October Ivan Kubrakov, police chief in the capital of Minsk who presided over crackdowns on large demonstrations, was appointed interior minister.

These figures have even less to gain from siding with an opposition which demands their lustration. As the Russian political scientist Andrey Okara told the Ukrainian website Telegraf.UA, the Belarusian political elite is now in the same boat as Lukashenka, and it's time to sink or swim:

Something will certainly happen to Lukashenka. He's on the home stretch. The only question is how and when things will come to pass. Key figures who have maimed others for the past three months (or at least haven't prevented it) are already bonded to Lukashenka with blood. In this case, that isn't a figure of speech. Bonded with blood, in the most literal sense.

For now, domestic factors do not compel Lukashenka to give in or give up. But his previous appeals to reform, once unburdened by details, are now being fleshed out.

A new constitution was one of several topics Lukashenka discussed with Russian President Vladimir Putin during a meeting in the Black Sea resort town of Sochi in September. In November, Moscow's Foreign Minister Sergey Lavrov reiterated Russia's hopes for this reform; Lukashenka then hinted that he may even step down as president if a new constitution was agreed.

Few in the Belarusian opposition, which dismisses these reforms as window dressing, would take Lukashenka at his word. They are convinced that there is a catch.

Recent experience proves them right. In recent years, several ailing autocratic leaders across the post-Soviet space have tinkered with constitutional arrangements to ensure their hold on power.

In 2016, Armenia's Serzh Sargsyan held a referendum on parliamentary democracy, allowing himself to pivot into the newly empowered prime minister's seat once his presidential term limit approached. Despite resigning as president in 2019, Kazakhstan's Nursultan Nazarbayev still leads the ruling party, chairs the security council and enjoys immunity from prosecution.

This year Putin, after years of speculation about what will happen when his limit on successive presidential terms approached, confounded all predictions. His was the most brazen solution — he simply reset the counter on the limit of those terms, and is back to square one.

There are options for Lukashenka. But as the Belarusian political analyst Artyom Shraibman writes, few of them are enticing: a constitutional referendum would entail electoral fraud and prompt another wave of protest. Transferring power to a parliamentary system requires the unenviable task of growing a political party's influence at a time of public disgrace. So what's left?

The Belarusian National Congress (BNC), an advisory council comprising a hand-picked spread of representatives of Belarusian society. While democrats acerbically compare the BNC to the late Soviet Congress of People's Deputies, it could be Lukashenka's saving grace. This popular Telegram channel on Belarusian politics believes, as do others, that the BNC could gain new powers which would enable it to make constitutional changes with a tokenistic democratic legitimacy:

Because it's the easiest option. And it solves many problems in one fell swoop. It's time consuming and expensive to found stable political parties and fine-tune how they function within a managed democracy. Party politics invariably leads to greater publicity and constant media scandal, which the authorities are eager to avoid (in order to preserve, so to speak, the demobilising nature of the authoritarian system). […]

But in this configuration, Lukashenka could head this body while formally relinquishing the post of president, guaranteeing his decisive influence over governance and preserving his legacy. And later, when the situation permits, he could do some fine tuning or work on a party structure.

This week, Lukashenka stated that preparations were underway for the congress to meet in January 2021. It will play an important role in some form of political reconfiguration — as encouraged by Moscow.

It is important to remember that there has been little love between Moscow and Minsk in recent years.

And at the end of 2020, it is easy to forget that before the August elections, Lukashenka also blamed Russia for political unrest — citing the presence of Russian mercenaries in Minsk before the vote. But as street protests grew and Tsikhanouskaya courted support from the EU, Lukashenka appealed more strongly to the spectre of “colour revolutions” or a repeat of the Euromaidan protests in neighbouring Ukraine in 2014.

Uncomfortable with the precedent of a mistrusted ally — but an ally nonetheless — ousted by street protests, Moscow had little choice but to throw its weight behind Lukashenka. Its national guard will now train with Belarusian law enforcement. Its top diplomat vociferously accuses the West of “meddling” in Belarusian affairs. In October, Moscow issued an arrest warrant for Tsikhanouskaya.

READ MORE: What is Russia's endgame in Belarus?

Nevertheless, its insistence on political reform could imply a longer game — one not necessarily in Lukashenka's favour. Russian analysts suspect that behind the scenes, Moscow is now considering who might replace the embattled Belarusian leader. It is a delicate dance; supporting Lukashenka too brazenly could destroy the goodwill Russia enjoys from Belarusians, even those who fiercely oppose their rulers.

Given this mood and Belarus’ structural dependence on Russia, Moscow can afford to push for limited political liberalisation. In doing so, it quietly hopes to cultivate an amenable successor to Lukashenka — somebody untarnished by close ties to his regime and its brutality.

It's not for nothing that investigative publication The Insider recently revealed that Russia's Presidential Administration plans to establish a pro-Russian but anti-Lukashenka political party in Belarus.

What is clear is that Lukashenka has been ready to destroy the social contract with his citizens in order to remain in power. In fact, given the increasing economic pressure on Belarus, it is a wonder that such a social contract, with its large public sector, could ever have lasted at all — facing pressure from its largest creditor, Russia.

At the October meeting in Sochi, Russia promised a $1.5 billion loan to Belarus, a third of which returned to Moscow's pockets in the form of writing off a loan from Gazprom, Russia's state-owned oil giant. That will prop up what remains of the social contract for a time.

But the disruption to the country's economy, exacerbated by the COVID-19 pandemic, has been significant. Private companies, particularly those in the booming IT sector, have been harassed for political reasons. Some have even fled the country.

This is a regime which is rapidly running out of carrots, and has only the stick at its disposal.

The ugliness of 2020 could have compelled the rest of the world to look away. In a year dominated by a pandemic, Russia has been preoccupied with plummeting oil prices and domestic political headaches. Much the same can be said about the EU and the US in the dusk of the Trump administration. Brussels, Moscow and Washington may have resigned themselves to yet another deeply dubious election.

But the groundswell of Belarusian civic activism and the tenacity of protesters has taken the world by surprise.

Yet optics alone do not make for triumphant protests. For now, Lukashenka will survive — but weakened, largely loathed, and dependent on the good graces of Russia, a country which in recent years has been trying desperately to reduce the price it pays for loyalty of its allies.

Deepening isolation from the West, which has recently introduced new sanctions against Belarusian politicians and could take a more active role under the incoming Biden administration, will only force Minsk into even deeper dependency on Russia. Russia can have loyalty or it can have value for money — Lukashenka's strategy will be to insist that it cannot have both.

Lukashenka's rule could well stagger on for a few years yet, through imitating political transition and continuing repression.

But police brutality, in some cases against people who have never before protested, appears to have catalysed and politicised Belarusians on a scale not seen before.

That will ensure neither the passivity of the ruled, nor the longevity of their rulers.