Raman Bondarenka was the fourth protester killed in Belarus 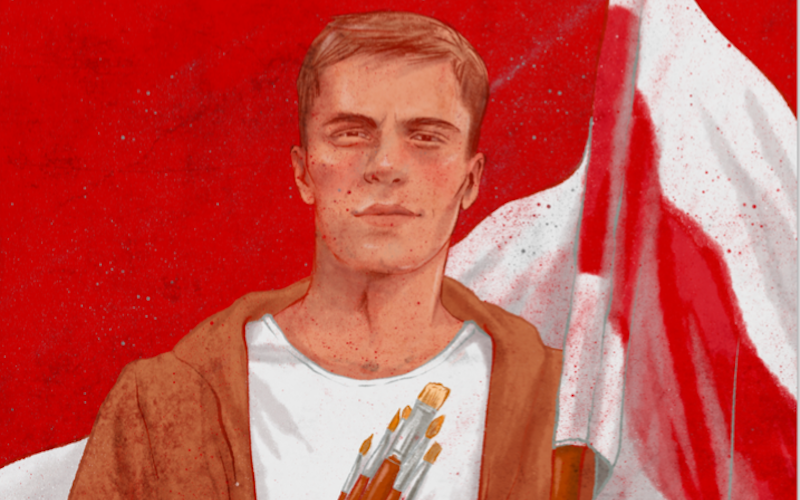 Detail from an illustration of Raman Bondarenka by Belarusian artist Ania Redko, 2020. Used with permission.

Belarus is in mourning. On November 20, thousands of protesters arrived at the Church of the Resurrection in the capital of Minsk to pay their respects to Raman Bondarenko, a 31-year-old activist who died in police custody.

The mourners were not deterred by the cold. Winter has done little to diminish the protests which have seized the country since presidential elections in August. Their catalyst was an attempt by Alyaksandr Lukashenka, who has ruled Belarus since 1994, to stay in power for a sixth consecutive term. Those who take to the streets to oppose him have faced police violence, detention and torture.

One symbol of this movement are ribbons in red and white, the colours of the country's previous national flag. They are now ubiquitous at mass protests as a sign of opposition to the government. So when Bondarenka spotted a group who had arrived to remove them from a courtyard near his home in Minsk on the evening of November 11, he headed out to confront them.

The men beat Bondarenka so severely that he fell to the pavement, hitting his head several times during the attack. He was then driven away in a minibus and surfaced in police custody. By the evening of November 12, Bondareka lay in an intensive care unit at a city hospital, where he died of brain damage after several hours’ surgery.

One of the first summaries of the event was provided by Anton Motolko's popular Telegram channel, which included some footage along with a summary:

“I'm with Batka” supporters arrived with women and children in order to cut ribbons. People came out. A fight ensued. Guys in masks appeared from nowhere and shoved a man into a bus.

The phrase “I'm with Batka”, using the president's folksy moniker, refers to a top-down attempt during the protests to launch a civic movement in support of Lukashenka. While the authorities have suggested that the group, all in plain clothes, were merely “concerned citizens”, the exact identity of Bondarenka's attackers remains unknown.

When Lukashenka commented on Bondarenka's death on November 13, he described the assailants as one of 500 “public order squads” who aimed to remove “pro-Nazi symbols”. And while Belarusian officialdom has urged a transparent and thorough investigation, their line is simply this: Bondarenka got into a brawl between opposition and regime supporters.

Lukashenka also affirmed the Investigative Committee's declaration that Bondarenka was found to have been drunk at the time of the fight. Yet this was denied wholesale by doctors in anonymous interviews to the prominent online news portal Tut.By. Bondarenko's mother later provided the independent newspaper Nasha Niva with scans of her son's blood test results, which showed zero percent ethanol.

Katerina Borisevich, the Tut.By journalist who reported on the allegations of Bondarenka's drunkenness, was detained on November 19 and now faces criminal charges for disseminating confidential medical information.

Furthermore, an investigation by the Russian investigative website MediaZona's identified further gaps in the official account of events. Through examining CCTV footage and interviewing residents near the scene of the attack, its journalists established that the police in fact arrived at the courtyard at 22:30, seemingly paying no attention to the minibus to which Bondarenko had been dragged against his will. This complicates accounts, including that of Lukashenka, that the police had themselves called an ambulance for Bondarenka. The same camera footage suggested that several of these individuals had surveyed the area well before removing the ribbons, implying something rather more organised than a spontaneous action by pro-Lukashenka supporters.

And so, Belarusians’ anger at their government — though few if any protesters still consider it theirs — is now newly inflamed by the possibility of a cover-up. Sviatlana Tsikhanouskaya, Lukashenka's opponent in the election who has fled to the European Union, recently declared Bondarenka a “Hero of Belarus”. EU officials have threatened new sanctions against Belarusian officials, whom they hold responsible for Bondarenka's death.

Bondarenka's last words, “I'm going out”, shared with a WhatsApp group for local residents, have become a rallying cry and a hashtag (#ЯВыхожу) for a new wave of demonstrations. Judging by reports shared on the popular NEXTA Telegram channel, these have taken diverse forms, from workers at state-owned enterprises downing their tools for a minute of silence to flower laying ceremonies in the squares of nearly all the country's largest cities. Thousands also attended a vigil in the courtyard where Bondarenka was detained, chanting “we will not forgive, we will not forget”.

More traditional mass protests have also been held. On November 15, police used tear gas and water cannon against thousands of demonstrators; the Viasna Human Rights Centre estimates that at least 928 were detained that day alone.

In recent days, Belarusians have posthumously acquainted themselves with the young man whose portrait they hold as they face down riot police.

He was a military veteran, an art teacher, and a designer. He was also the creator of a popular protest mural in Minsk:

Raman Bondarenka was the creator of the “DJs for change” mural. That's all I can say.

Even some public officials have voiced dismay. Valery Voronetsky, a deputy in the Belarusian parliament and ambassador, wrote the following on his Facebook page:

Such pain, misery and mourning… This violence must end! The law and justice must be restored!

“Bondarenko's death was a bomb in Belarusian society, and it has lead to a growth in protest activity. Not an exponential one, but a significant one”, explains Artyom Shraibman, a political analyst and regular contributor to Tut.By.

“Even the authorities have understood how sensitive this is, so have decided not to call Bondarenko an enemy who deserved his death. On the contrary, Lukashenka expressed his condolences, even while authorities have implicitly suggested that the opposition are guilty by creating such havoc and protests in the first place”, Shraibman told GlobalVoices in an interview.

Perhaps what was remarkable about Raman Bondarenka was how unremarkable his biography was — and how easy that makes it for Belarusians to identify with his fate. They appear convinced that it could befall them, too. The following text, which has circulated on opposition blogs and social media channels for several days, gives form to that foreboding:

Raman Bondarenka served in the special forces, but that didn't save him.

Raman Bondarenka wasn't participating in a protest, but that didn't save him.

Raman Bondarenka wasn't holding any symbol in his hands, but that didn't save him.

Raman Bondarenka left his home to find out what was going on. That was the reason for his death.

Before going down, Raman wrote “I'm going out”

Those fears are informed by precedent. After months of protest, many Belarusians have relatives or friends who have been detained and beaten at police stations.

With the death of Bondarenka, at least four Belarusians are thought to have died during protests since the presidential elections in August. One was Alyaksandr Taraikovski, who may have been killed by police in Minsk on August 10.  Another was Alyaksandr Vikhor, who died in a detention centre in the city of Homyel on August 12. The third was Hennady Shutov, who died on August 19 from a gunshot wound to the head after police used live ammunition on protesters in Brest on August 11.

In the words of Belarusian researchers Alena Minchenia and Nadzeya Husakouskaya, change has already come to Belarus. These deaths bring “a shared sense of living through grief and pain, which cannot be undone”.

The fear is that they also put paid to any hopes of a peaceful transition of power. For some observers, Bondarenka's death was not simply a tragic misstep amid havoc without a clear culprit, but the predictable result of a methodical and paced increase in indiscriminate violence by the Belarusian authorities.

“The death of Roman did indeed intensify the protest mood. But the following events mobilised people to an even greater degree: how the OMON [riot police] dispersed those who had gathered to honour his memory on Sunday, and how protesters had to hide for 15 hours without water or food in the basement of the apartment building where Raman used to live. To add to this, in the following days the water supply [was cut off] to the Novaya Baravaya neighbourhood, which has a strong protest mood and where people hang out white-red-white flags. People believe that the problem is intended to humiliate them”, remarked Kaciaryna Šmacina, a Research Fellow at the Belarusian Institute for Strategic Studies, in an interview for GlobalVoices.