‘Asa Ayo'? No, Thanks. Armenian Opposition Gets Creative Ahead of Crunch Referendum 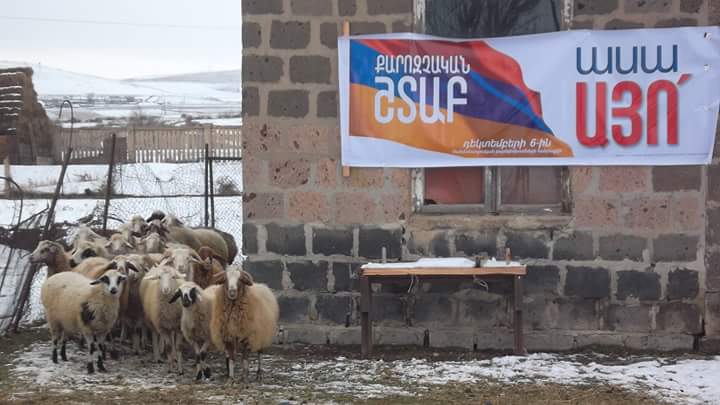 Widely shared image of sheep huddled close to a poster for the ‘Yes’ campaign before Armenia's December 6 referendum.

Armenia’s referendum on December 6 will determine whether or not the country switches its form of government from a semi-presidential system to a parliamentary one. But in a particularly turbulent year for Armenian politics, most people view it as being about much more than just that.

Changes to the constitution were first sent to the parliament by members of the ruling Republican Party in August. Proponents of the proposed system say it will promote stability. Yet its critics argue it will weaken democratic institutions and erode constitutional protections of social and economic rights, while empowering the political elite surrounding incumbent President Serzh Sargsyan, whose second and final term expires in 2018.

Specifically, the changes would mean a weakened president elected by the parliament every seven years rather than one elected by the people every five. The Prime Minister, meanwhile, would grow more powerful.

With fewer elections, the system advocated by the ‘Yes’ campaign seems designed to limit democratic participation in the South Caucasus country. Paradoxically, however, it has provided impetus for a growing grassroots civic opposition that has mobilized around the ‘No’ campaign.

The ‘No’ movement has emerged from a conglomerate of civic activists in loose collaboration with opposition political parties such as the Armenian National Congress, a faction in the Armenian parliament.

Powered mostly by social media, the counter campaign is emblematic of rising public frustration with a regime overwhelmingly perceived by the public as corrupt, self-serving, and out-of-touch.

In this sense the counter-campaign has picked up where the Electric Yerevan protests in June of this year left off. The protests — spurred by a looming hike in the price of electricity tariffs — created debate around social, economic, and political problems in Armenia in a way that formal politics and traditional Diasporan organizations have generally failed to do.

They were met with police violence widely condemned by rights monitors. Nevertheless, they forced the government into a corner in unprecedented fashion, with the hike demanded by the Russian energy company that controls Armenia's electricity grid now government-subsidized rather than borne directly by citizens.

Like Electric Yerevan, the ‘No’ initiative has become a vehicle for the misgivings and anxieties of the Armenian public vis-a-vis the ruling elite. But for the moment — bar a peaceful pre-referendum rally in the capital's freedom square on December 1 — it is largely playing itself out on television and online, and in particular, on Facebook.

One of the initiative's Facebook pages features campaign information and promotional materials encouraging a ‘No’ vote.

Among the materials are a series of positive and cheerful videos that represent a shift towards more sophisticated political campaign tactics, reminiscent of those captured in the movie ‘No‘ about the 1988 referendum in Chile.

Another group page features photos of individual supporters holding small signs that say ‘No’, while supporters are currently changing their profile and cover photos on Facebook to show themselves doing the same.

The ‘No’ campaign has also seized on public fears that the vote will be subject to violations.

A cartoon created by Armenian media outlet MediaLab that shows a dead person in a coffin casting a ‘yes’ ballot with the text saying, “We are carrying out the last wishes of the deceased”, has been widely shared by Facebook users in the run-up to the vote.

The cartoon gathered even more traction following the later discovery of a man on a voter list in a Yerevan neighborhood who was born in 1895, and would have been 120 years old at the time of the referendum.

A recently published survey that found inaccuracies in voter lists ahead of the referendum, seems to confirm initial misgivings about the likelihood of voter fraud.

In addition to these tactics, ‘No’ campaigners have subverted mundane regime-sanctioned messaging in a humorous display of dissent. Most commonly this has involved digitally altering images of the government’s Asa Ayo (‘Say Yes’) slogan, playing on the word ayo (yes). 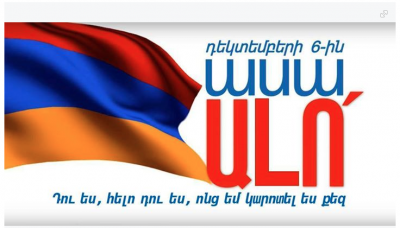 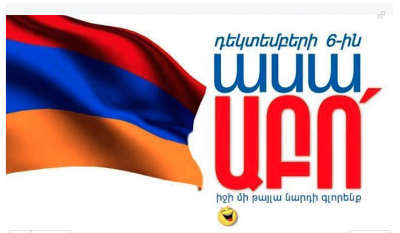 On December 6th, say ‘Abo! Come over and let’s play a round of backgammon.’ 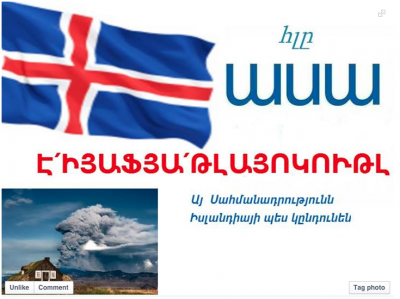 Now say ‘Eyjafjallajökull.’ Then they will accept a constitution like Iceland’s.

Anger and frustration have also reconfigured social space offline. Armenian political graffiti has been a feature of public dissent since at least 2010, so it is no surprise that new examples of street art focussed on the referendum topic have been popping up around the city.

In a convergence of two protest mediums, many of these have been photographed and shared by Armenian social media users. 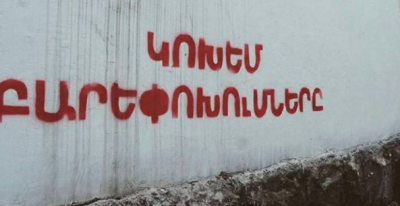 F*ck the changes. Graffiti in Yerevan.

The government’s apparent shutdown of a ‘No’ campaign meeting at the Yerevan Double Tree Hotel on November 27, for example, is an example not only of the coercive power wielded by Sargsyan’s regime, but also its deeply rooted fear of a potentially stronger mobilization.

Armenia's political elite and its citizenry, already long ago disconnected from one another's realities, stand to grow even further apart if the reforms pass.

The smaller number of elections proposed by the ‘Yes’ camp will mean fewer opportunities for the public to voice their will through formal political processes, shifting the emphasis towards civic disobedience as a means of expressing discontent.

Given the social explosion unleashed during Electric Yerevan, it seems likely that a ‘Yes’ vote on December 6 could set the stage for more protests.