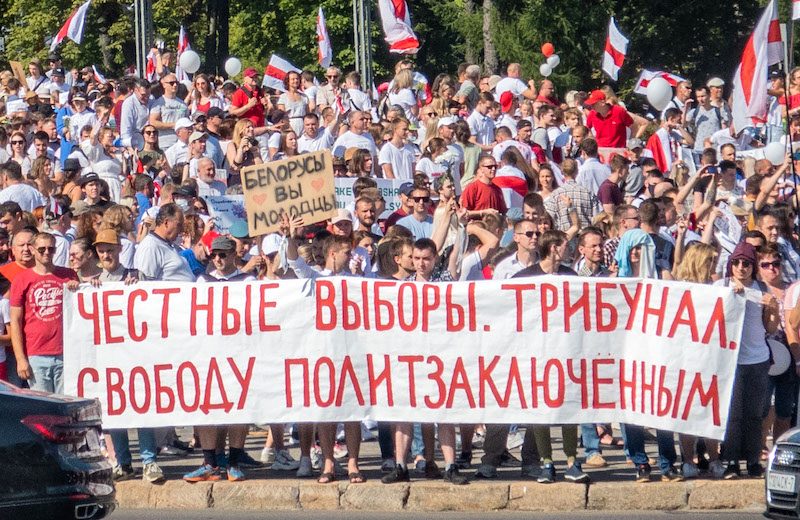 Belarus today is a state in turmoil. Courageous protestors face off against a brutalising security apparatus that has sided with the country’s longstanding leader, Alyaksandr Lukashenka. This crackdown comes after mass protests which have bought hundreds of thousands to the streets, enraged at plausible accounts of fraud in the presidential elections of August 9. To some, Belarus is now under “occupation” by a dictatorial regime that has no popular support. To others, Belarus is being undermined by plots from the United States. Beyond these charged claims is a more complex reality of a country divided on many levels even before recent events. A sense of these divisions is evident from a nationally representative survey we conducted in Belarus at the outset of this turbulent year.

Our survey in January 2020 was part of a large project that examines the geopolitical orientations of people in the countries and de facto territories on the borders of Russia. It is motivated by the evidence that different trajectories are reshaping post-Soviet space – with strong support for more integration with the Western institutions in Ukraine and Georgia but continued close ties to Russia in the other polities. Belarus is especially interesting because its close economic and political-military ties to Russia have weakened in the past 10 years. But Belarus has also posed a headache to researchers due to the difficulty of garnering reliable data about domestic politics, especially about the actual level of support for President Lukashenka. Regional experts, including at the Russian International Affairs Council (RIAC), have offered estimates. In our national survey, we calculated Lukashenka’s approval at 26 percent in a list experiment that collects reliable responses, a figure that is close to other estimates.

Our representative national survey of 1,209 responses was conducted by an established and reputable survey company in Belarus, under our supervision and with the consultation and computer support of external survey experts for sampling design and tablet programming. We are not identifying the polling agency here out of caution given the current repressive situation in Belarus. Our procedures followed the best survey practices in random sampling of the population for face-to-face interviews. The results that we show here are the answers weighted to take into account the slight differences between the most recent population data and the numbers in our survey across regional and demographic groups.  Given the regime restrictions on face-to-face polling, we believe that these data are the best available and importantly, they show the societal divisions that underlie the recent protests against the Lukashenka presidency. Foremost among these divides is a huge generational rift between those who became adults during the Soviet period and those born after 1990.

The highly improbable scenario of Lukashenka winning 80 percent in the August election is undermined by our survey data. The events of summer 2020 probably reduced his support even more than the low rate that we already saw in January. As he continued his almost 30 year presidency of static policy, his society was changing irrevocably without him. His supporters in the older age categories (over 60) declined over time so that by the 2009 Belarusian census they were outnumbered (3.5 million to 2 million) by those under 45. As the graphs below reveal, younger Belarusians (45 or younger) differ dramatically in political outlook from their elders.

A significant divide concerns views about the Soviet system (Graph 1). Young voters (those aged 30 or younger) are three times more likely to approve of the collapse of the Soviet Union that those aged over 60. While the Soviet system was deeply flawed and repressive, for many it provided social stability and a certain minimum of social welfare provision that older voters now recall with nostalgia. We have seen this demographic pattern in dozens of surveys that we have conducted over the past 25 years across the post-Soviet space, but the gaps across the generations in Belarus in 2020 are among the largest. Although Belarus has not seen the scale of dislocation of jobs and material prospects evident elsewhere, the stagnation of the past three decades has nonetheless produced a sense among younger generations that they have been left behind. 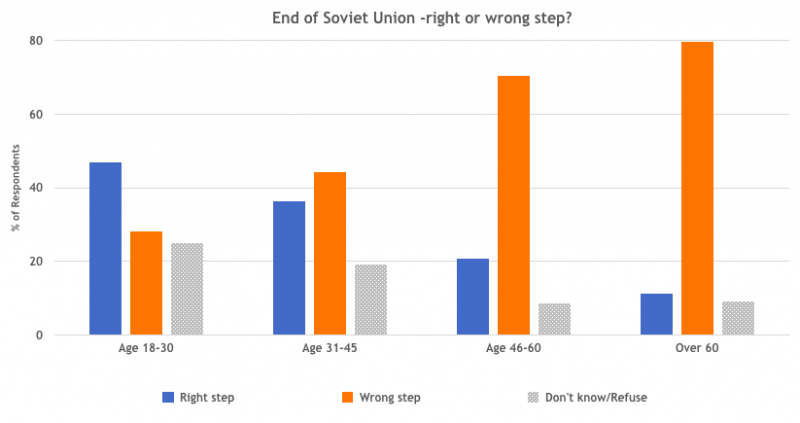 A simple but powerful question asks about “the general direction of the country” and respondents are offered a stark choice – in the right or wrong direction. These ratios are highly indicative of both the current status and also the perceived immediate future. On the direction of Belarus under the leadership of Lukashenka (Graph 2), younger adults are more than twice as likely (55 percent) as older residents (22 percent) to respond with the wrong direction answer. As the age of respondents increases, the shift from negative to positive views of the direction changes proportionately. Overall, only 29 percent thought that the country was heading in the right direction, 52 percent in the wrong direction with 17 percent uncertain. In any society with fair elections, these ratios would portend a change of government as an incumbent regime would be blamed for this poor outlook. 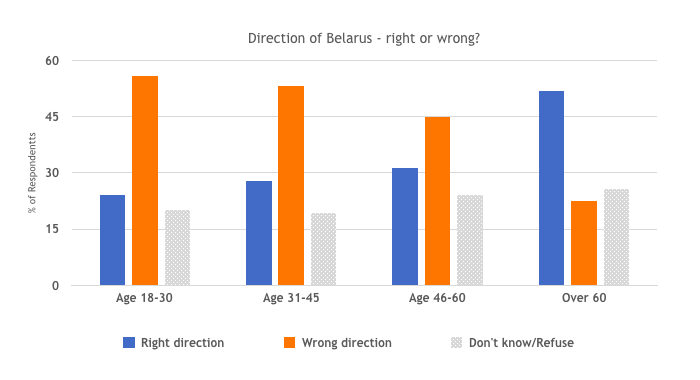 Given the close, long-established economic and political relations between Belarus and Russia, generational differences evident on the graph of “which power has the greatest status?” are surprising. The term ‘greatest status’ is deliberately vague. For some, it might mean acknowledging military strength, for others economic leadership and for yet others, cultural attraction and soft power. One would expect that Russia would be favored for this status, but as Graph 3 shows, the differences between generations are clear. For the two generations younger than 45, a plurality nominate the United States; for those aged 46-60, a plurality picked Russia and for the over 60 age group, a majority picked Russia. Interestingly, China out-scores the EU across all ages and comes close to the Russian ratio for the younger age groups.  A recognition of changing geopolitical realities and a relative diminution of Russia’s status for the young is reflected in these results. Other recent research confirms these broad trends among young Belarusians. 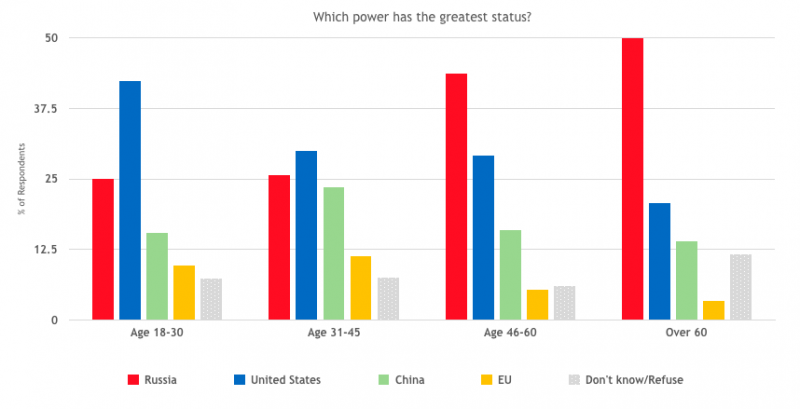 What lies behind these big generational gaps? As Graph 4 shows, preferred sources of information appear to play an important role. But the exact causality remains unclear. Do younger people avoid television because it provides a steady diet of state-controlled information and look to the internet and social media instead? Or does access to web-based information about the nature of Western societies lead to a rejection of the kind of society that Lukashenka has controlled for decades? Either way, the overwhelming reliance on television for information by the over 60s stands in sharp contrast with the role the internet plays for about half of the respondents under 45. 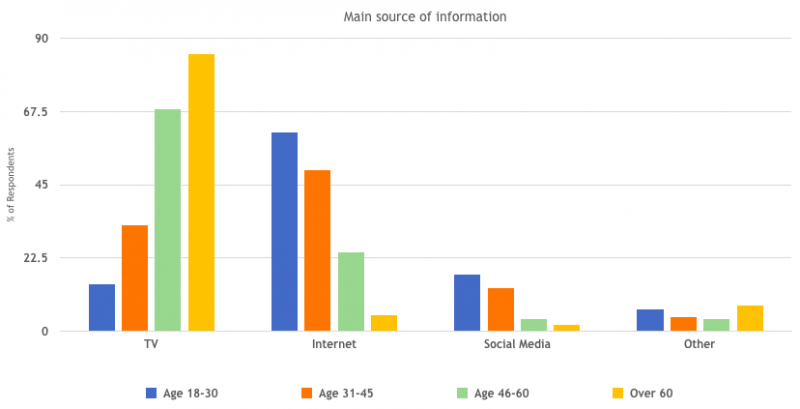 This Western orientation is promoted, hardened, and confirmed by the preference of movies from Hollywood and to a lesser extent from Europe (Graph 5). Here a clear difference in movies between the 18-30 and the 31-45 age groups shows the broader popularity of Western cinema to the younger group. For those born or socialised in Soviet times (now aged over 45), Soviet and contemporary Russian movies retain their traditional appeal. 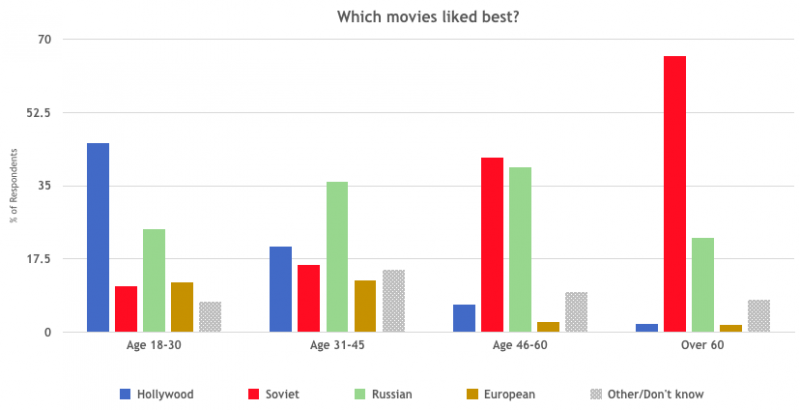 In sum, we have identified through these data a younger generation, culturally oriented to the West, which prefers Western democracy to the current or Soviet model, rejecting Soviet traditions and, of course, Lukashenka. When asked about the best political system (Graph 6), those aged 18 to 30 overwhelmingly chose the generic option ‘Western democracy’ over the more concrete options of the current system in Belarus, the Russian political system and the Soviet system which they have experienced. By contrast, those over 60 are clear in their rejection of ‘Western democracy’ and preference for the Soviet system. The two political systems most removed from contemporary Belarus (the Western and Soviet models) get more support than those familiar for the past 30 years. There is no one ‘Western democracy’ model, of course, but the power of that ideal in contrast to the reality in Belarus, and Russia, is one reason we see so many young people putting their bodies on the line in protests across Belarus each weekend. 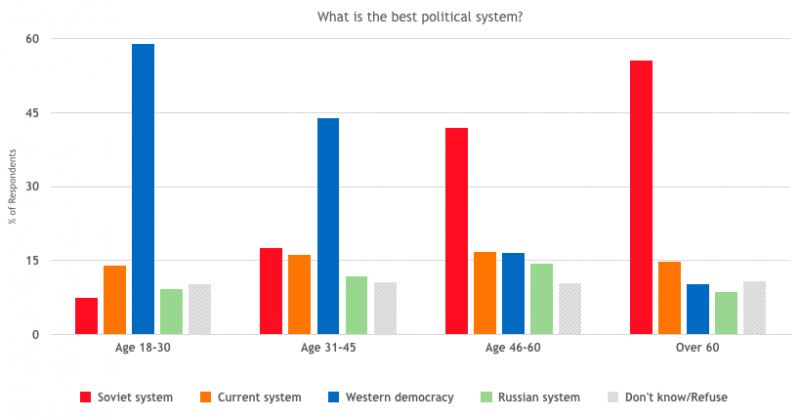 While unambiguous generational differences are visible on these graphs, the generations do not always show divergent preferences on other issues. For example, there are no significant generational differences in religious beliefs nor in conservative social mores, on questions about whether “a husband should make the important decisions”, or whether “marriage should be between a man and a woman” (over 90 percent agreement across the generations). All generations disagree strongly that the Maidan revolution of 2014 was a positive development for neighbouring Ukraine and disagree with the removal of Lenin monuments, a lasting legacy of Soviet times on the Belarusian landscape.

Western liberals looking at young protestors in Belarus, thus, should know that they hold some conservative attitudes. While they are Western-oriented, preferring its political institutions and cultural products, they also reject, like their elders, many of the liberal social and political attitudes now mainstream in parts of the European Union (though not in some government circles, like in Belarus's neighbour Poland). At the moment, however, their aspirations are eclipsed by a repressive dictatorship.