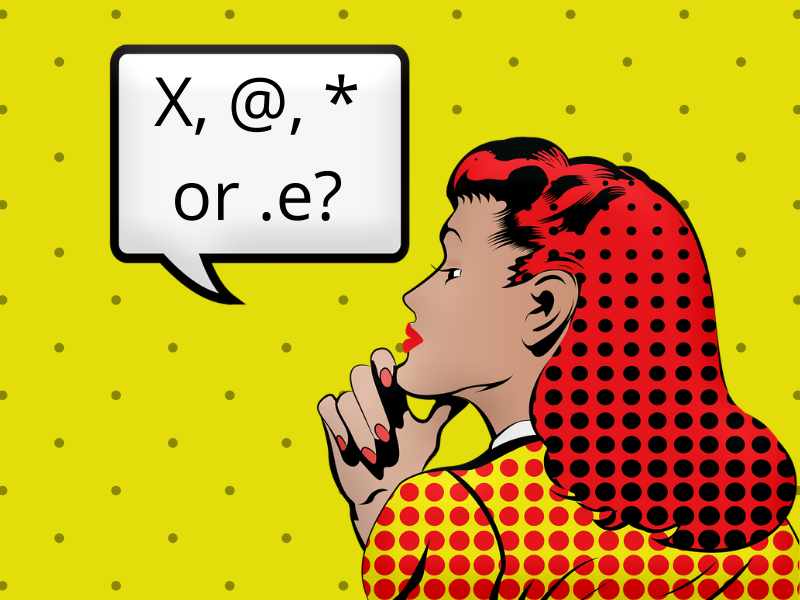 Image from Pixabay, under Pixabay License, remixed by Global Voices.

In the coming months, Global Voices will explore non-binary language initiatives, initially known as “inclusive language”. This first collective story begins with an exploration of gender in Romance languages.

Language can be seen as a form of magic that impacts the world. What we say and how we use language affects our thinking, imagination, and our reality.

In most Romance languages, there are feminine and masculine gender marks for pronouns, nouns, adjectives, determiners, and demonstratives. In situations where a person's gender is unknown or when referencing a mixed-gender group, current Romance language conventions prioritize the masculine form as the generic standard. Unlike Romanian, which has preserved the neuter gender from Latin, the French, Spanish, Portuguese, Italian, and Catalan languages only have binary gender forms and, therefore, pose special difficulties for gender neutrality.

Activism for gender neutrality in language is part of a larger movement to question, resist, and dismantle sexism conveyed through language. Activists claim that the dominance of the masculine gender in languages is not neutral, as purported, but rather has been imposed historically through ideological and political processes.

During the past few decades, movements have pushed for the increased visibility of women and other genders in language by promoting the use of neuter pronouns and inflections with different combinations of symbols or vowels.

In French, old rules are called into question

Children who study French quickly learn the oft-repeated grammar rule: “masculine takes over feminine”. This means that in plural sentences with different genders, the masculine form dominates. Among French-speaking communities, an orthography known as inclusive writing has gained prominence in recent years to address this linguistic gender bias.

The first way of adopting inclusive writing is to use existing neutral forms where possible, for example, “lectorat” (‘the readership’) instead of “les lecteurs” (m.) or “les lectrices” (f.). The second technique explicitly includes both masculine and feminine endings. For example, the “e” and “ice” endings, often used for feminine forms, would follow the masculine form, for example, “lecteur·ice·s” (‘readers’).

Although this orthography has been adopted by some media outlets, universities and a few companies, it remains highly controversial, most notably in France, where critics argue that it is unnecessary.

The most common new pronoun used to refer to non-binary people or to a mixed-gender group is “iel” — a contraction of “il” and “elle” (‘he/she’). Yet, there is still no consensus as to how to mark a neutral gender in other parts of speech. For example, if “iel” is used, speakers might still be forced to pick, later on, one of the binary gender options for adjectives’ or nouns’ endings. So far, pronouns and gender-neutral alternatives have no institutional stamp of approval and are not widely used outside of queer, LGBTQI+ and feminist circles.

Active debates in Spanish and Portuguese 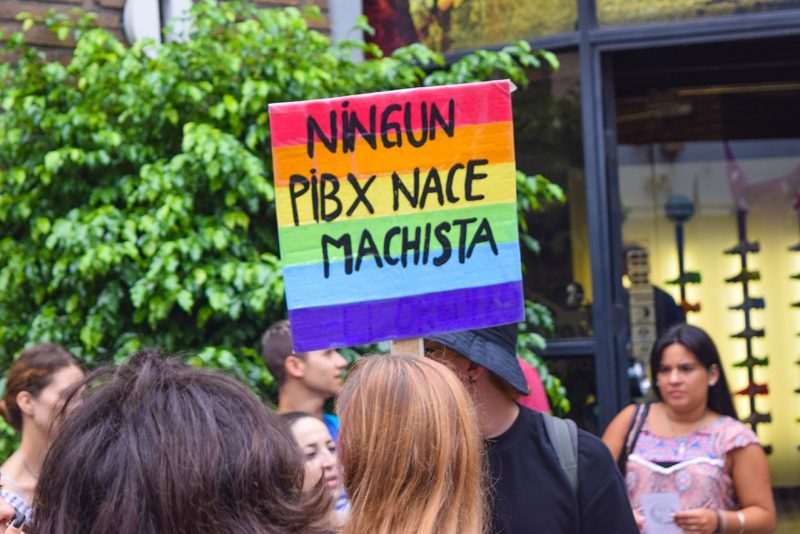 “No kid is born a macho” sign in a march for women's rights in Santa Fe, Argentina, 2017. Photo from Wikipedia, under CC BY-SA 4.0

Movements in the Spanish-speaking world have been pushing hard for gender neutrality. Language activism has been especially strong in Argentina, where it has become a powerful rhetorical and political tool in public discourse: President Alberto Fernández has used some forms of gender-neutral language in his speeches, several universities have allowed it in academic papers, and public offices like the Central Bank have included it in formal communications.

Several attempts at gender neutrality have been implemented over the past decades in Spanish; the earliest included the use of “x” and “@” to replace the vowel that marks gender such as ‘tod@s’ (‘everyone’). More recently, activists started using the “e” as a generic, neutral alternative, and the neuter pronoun “elle” emerged as an alternative for “él/ella” (‘he/she’).

While these forms are predominantly used within LGBTQI+ and feminist communities, a recent report by fact-checking news site Chequeado shows that some gender-neutral words are already being accepted (or tolerated) by Argentine speakers. Also, a new survey by the Spanish organization Fundéu highlighted the increasing use of “x”, “@”, or “e” by Spanish speaking Twitter users in each country.

Portuguese is similar to Spanish regarding alternatives for gender neutrality. In 2015, Andrea Zanella, a Brazilian psychologist, created a manifesto for “radically inclusive communication” in Portuguese in partnership with a company called Diversity Box. Since then, Diversity Box has been creating gender-inclusive guides for companies.

Like in Spanish, the use of “x” or “@” has become popular on the internet, especially among feminist groups, despite not being part of Portuguese language grammar rules which requires legal changes in the Brazilian Congress. The matter is not currently on the legislative agenda in Brazil.

Italians hesitate on the schwa 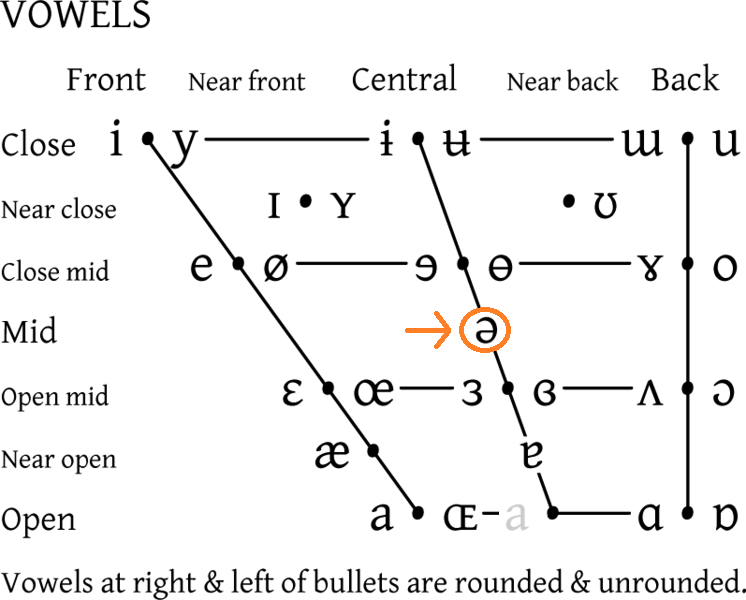 In Italy, even though debates about gender neutrality are not as prevalent as they are in Spanish-speaking communities, there is a discussion led by Italian linguist Vera Gheno about the schwa or scevà (ә), an International Phonetic Alphabet (IPA) symbol.

The schwa stems from dialects of Central and Southern Italy and can be used to refer to multiple people in a gender-neutral way. It could replace the * or “@” at the end of gendered words, which is very common online but not pronounceable in spoken Italian. In August 2020, Italian blogger Alice explained how to pronounce the schwa.

This proposal was made five years ago by the citizen-led project “Italiano Inclusivo” (‘Inclusive Italian’), although the official language authority, Accademia della Crusca, still refuses to accept the schwa (and any other form) as an evolution towards a neutral Italian language.

Feminists and LGBTQI+ communities take the lead in Catalonia

In Catalan-speaking territories, an adaptation of the non-binary language solutions developed in the Spanish-speaking world is gaining momentum within feminist and LGBTQI+ communities. “Elli” and “ellis” become alternatives to “ell/ ella” (‘he/she’) and the plural forms “ells/elles” (‘they’ m., ‘they’ f.).

Though many institutions — including Catalonia's local government — have been recommending the use of non-binary language for decades, guidelines from the Autonomous University of Barcelona focus on strategies like giving preference to existing neutral alternatives such as “el professorat” (a group of professors) or double-gender forms like “els professors i les professores” (‘the professors’ m. and ‘the professors’ f.), or feminine generics.

Non-binary language is particularly challenging in Romanian. Forms such as “@” or “e” do not work for Romanian since “o” is not usually a masculine ending and feminine nouns are traditionally formed by adding a suffix to the masculine (“activist“>”activistă“). Sometimes the alternative “X” ending is used, for example, “activistX” instead of “activiști”/”activiste“, masculine and feminine for “activists”. However, gender activists use the pronouns “ei” or “ele” (as a rough translation to the English “they”) to avoid carrying gender marks.

Unlike the aforementioned languages, Romanian has preserved the neuter gender from Latin, but it is mostly used for objects or collective entities. All neuter nouns are masculine in the singular form and feminine in the plural, hence grammatical neuter does not necessarily equal neutrality from a non-binary language perspective. So, despite the apparent linguistic advantage, gender neutrality in Romanian seems far from prospering at the moment.