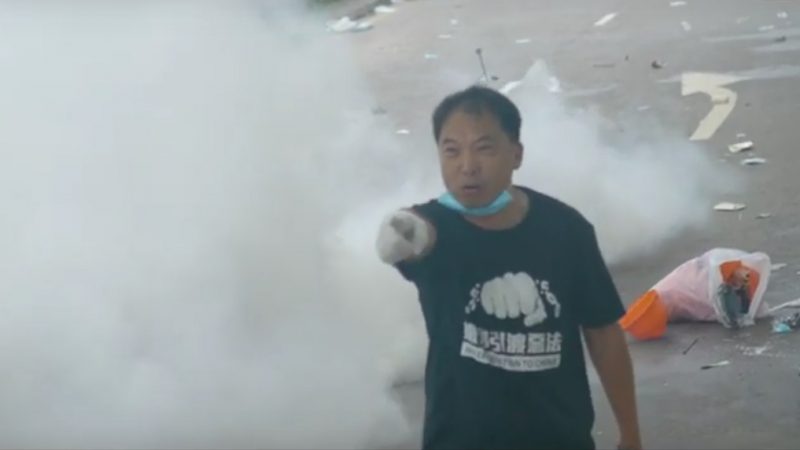 After 2 million Hong Kong people rallied against the June 12 anti-extradition protest being labeled a ‘riot’ by police, Hong Kong police chief Stephen Lo stepped back and said this label was a misunderstanding.

However, the withdrawal of the “riot” label has not pacified widespread indignation against the authorities. Many are still demanding to know why the police discharged 150 tear gas cans as well as rounds of bean bags and rubber bullets if they just wanted to quell a few aggressive protesters.

In a press conference on June 18, Stephen Lo said:

Lo also reported that the police arrested 32 people on June 12, and only 5 protesters have been charged with rioting.

In a Legislative Council session on June 19, Secretary for Security John Lee Ka-chiu stressed that the police had used a “minimum level of force” and justified the shooting of protesters’ heads as the result of “chaos”:

Police will target the protester’s largest part of the body. But the situation was chaotic and [people] were moving…

However, viral video footage presents a different picture. Below are the two most widely circulated incidents concerning the abusive use of force by police during the protests.

Tear gas outside of the Citic Building protest zone

The street outside the Citic Building was a police approved protest area with a permit, applied by Civic Human Rights Front (CHRF), that was valid between the dates of June 12 and June 14. However, at around 4 pm on June 12, riot police blocked the road from both sides and deployed at least 9 canisters of tear gas at the hundreds of protesters occupying the area.

After the roads were sealed off on both sides, the protesters began taking refuge inside the nearest building. The video below attempts to reconstruct the incident with marked map and explanation notes on screen:

A number of protesters wrote their accounts on citizen media outlets. Below is Man-bun’s account on inmediahk.net:

After 3pm, we heard the uproars from the direction of the Legislative Council and the other side (Wanchai Exhibition center direction). The rally organizers asked us to keep calm and stressed that the protest was peaceful. Although we were nervous, a majority decided to stay in the same spot. After a moment, injured people were moved in the protest area and we gave them space. Only by then were we aware that the police had deployed tear gas. Very soon we heard the sound of gun fire approaching. The police had sealed the area and kept pushing forward. Since we did not receive any warning from the police, people were shocked, angry and panicking. They rushed to the only exit, which was the Citic Building. Since I was sitting near the entrance, I was pushed inside by the crowds…

Inside the building, I found it difficult to breathe and kept sweating. I heard that someone was yelling out for asthma medicine… tear gas kept rushing in the building, at first you found it difficult to breathe, then you felt the pain in your nose and eyes and even skin. A majority of the doors were locked inside the building… after a while, the crowds slowly retreated via the pedestrian bridge connecting to the second floor… many were crying along the way, and I had heard that at least one citizen had an asthma attack and fainted.

The writer stressed that if the protesters were not helping each other out in such an orderly manner, the incident would have cost many lives.

At Tim Mei Avenue near the Legislative Council, riot police fired tear gas at protesters across the buffer area where Democracy Party lawmaker Wu Chi Wai was standing. He stayed there to act as a human shield against any direct conflict between the police and the protesters. Although there hadn't been any aggressive behavior coming from the protesters, the riot police started deploying tear gas at the crowds who were up to 100 feet from the police.

Wu Chi Wai was outraged and yelled, “I want to see your commander!” to the nearby police. Instead of a ceasefire, the riot police fired another tear gas can which exploded just 2-3 meters away from Wu. The lawmaker ended up being surrounded by tear gas with zero protection.

Wu’s experience was not the only case, at least 10 reporters told the Hong Kong Journalist Association that riot police fired tear gas cans at them at close range. 3 of them were hit on their heads by the canisters.

John Lee continues to invite protesters to submit their cases to the police department’s Complaints and Internal Investigations Branch (CII). Yet, the CII has been widely criticized as ineffectual as the investigators are also from the police department. Moreover, on June 12, the Special Tactical Squad (the elite team of the riot police) did not have their numbers displayed on their uniforms, making it very difficult to file a valid complaint.

The response from both the police and government authorities has failed to answer peoples’ demands. Lawmakers from the pan-democratic sector, Christian leaders, experts from the legal community, and a coalition of civil society groups have called for an independent investigation into the excessive use of force during the June 12 protests.

For more background on the anti-extradition protests, see our special coverage page.