Since the June 9 rally, protesters in Hong Kong have kept the pressure on 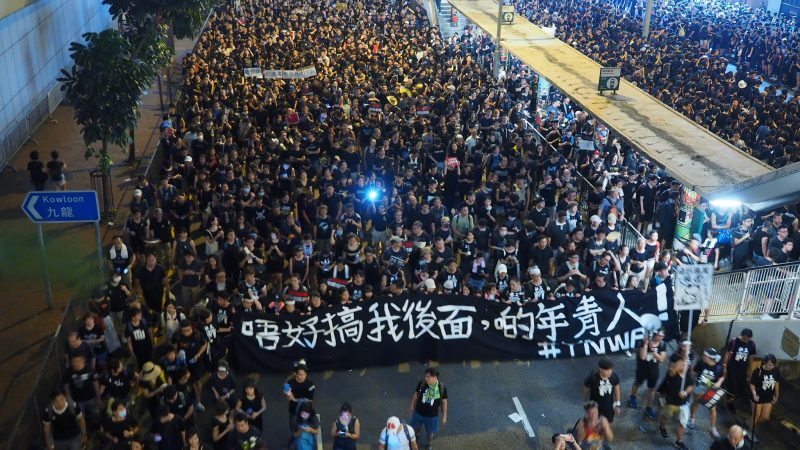 The banner reads: Don't touch the young people at my back. Photo from inmediahk.net. Used with permission.

Despite Hong Kong Chief Executive Carrie Lam’s promise to suspend the legislation of the extradition (amendment) bill on June 15 after a series of clashes between riot police and protesters, nearly two million local residents continued to rally on the streets on Sunday, June 16. They demanded Lam's resignation, a complete withdrawal of the extradition bill, and the renunciation of the labeling of the June 12 protests as a “riot”.

Ignited by Carrie Lam's labeling of the June 12 clashes as a “riot” and her maternalistic comparison of the protesters to “spoiled kids”, thousands of Hong Kong mothers gathered at the Chater Garden park on the night of June 13 and slammed Lam's cold-blooded support of the police's violent crackdown. The mothers declared that their sons and daughters were no rioters, expressing their concern that if they did not speak out and act, their kids might be shot by police in future protests.

Many parents also joined the June 16 rally with their kids to express their support of young people. They displayed banners with slogans such as “Kids are not rioters”, “Students are not rioting”, “No shooting our kids”, and “Carrie Lam is not our mother”. 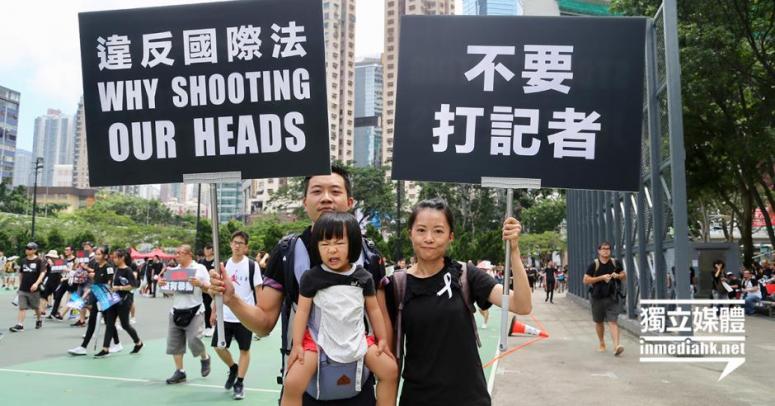 Parents rallied with their kids on Sunday June 16. The placard in Chinese reads: “Don't attack journalists.” Photo from inmediahk.net. Used with permission.

‘We are not rioters’

“Do not shoot – we are Hongkongers.”#HongKong protesters are carrying parodies of the police warning banners, which are usually displayed before tear gas or pepper spray is deployed.

For hours, throughout the rally, protesters chanted: “Carrie Lam, step down!”, “Withdraw the China extradition bill”, “Protesters are not rioters”, and “Release the arrested protesters”.

At least 11 people have been arrested for the June 12 protests thus far, a number of them—including a teacher and an elderly man suffering from lung cancer who were shot with rubber bullets—charged with “rioting”. The maximum penalty for the charge in Hong Kong is up to 10 years imprisonment.

While the city laws inherited from the colonial era has made it easy for authorities to charge protesters with rioting, probably no one except the Hong Kong authorities would dare to label the anti-China extradition protest as a “riot” had they watched the orderly rally on Sunday June 16. A video from the rally shared by student activist Agnes Chow on Twitter showed how thousands of protesters gave way to an ambulance:

Another scene recorded by popular singer Denise Ho shows protesters coping with pro-China opposition trying to pick a quarrel by singing the Christian hymn “Sing Hallelujah to the Lord”:

Hilarious (and touching) moment where the protestors resolved a conflict from an opposition, by surrounding him and collectively singing the oh-so-recently-movement-famous “Sing Hallelujah to the Lord”

Christian protesters have occupied several locations near the government headquarters and Legislative Council building and been singing “Hallelujah” in front of police officers for hours since June 12, in protest against the police crackdown.

Ahead of the Sunday rally, public resentment against the Hong Kong government was further inflamed after an anti-extradition protester plunged to his death at a shopping mall in Admiralty on June 15. The 35-year-old had climbed up a building to hang a protest banner reading “No extradition to China, total withdrawal of the extradition bill, we are not rioters, release the students and injured, Carrie Lam step down, help Hong Kong”. A suicide note was found on him.

Two million and one

Anti-extradition protesters gathered in large numbers to pay tribute to their fellow fighter with white flowers. 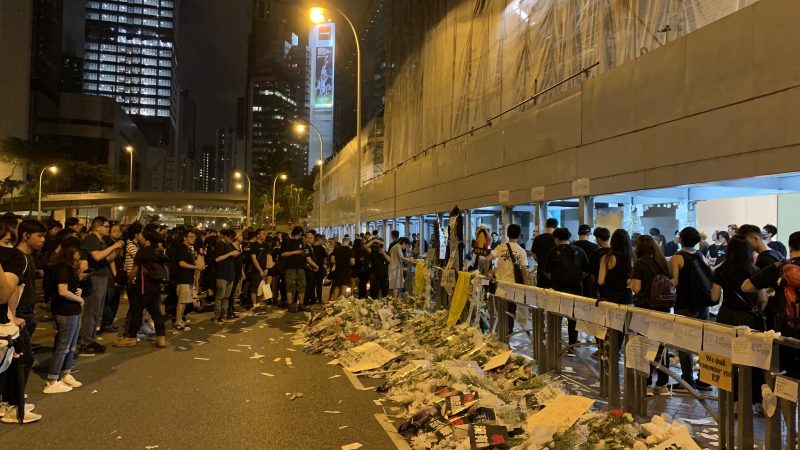 Hong Kong Free Press recorded the moment when thousands of protesters prayed in silence on the night of June 16:

Crowds silently hold up their mobile phone lights at a site where a protester fell to his death last night after unfurling an anti-extradition law banner. Floral tributes line the road.

The organizer of Sunday's rally, Civic Human Rights Front, announced at 6:30 p.m. the event had attracted 2,000,001 people—the last digit being a tribute to the dead. An especially striking photo taken by the Apple Daily and shared on Twitter by Hong Kong Free Press shows how the massive crowd lights up the night:

In response to the rally, Carrie Lam issued a statement apologizing to local residents for the “inadequacy of the government’s work” and accepted responsibility for the large-scale confrontation and conflict. The statement read:

The chief executive admits that large-scale confrontation and conflict took place in Hong Kong society due to the inadequacy of the government’s work, causing many residents to be disappointed and saddened…Having regard to the strong and different views in society, the government has suspended the legislative amendment exercise at the full Legislative Council with a view to restoring calmness in society as soon as possible and avoiding any injuries to any persons…The government reiterated that there is no timetable for restarting the process.

But Lam’s apology has not cooled people’s anger. A few hundred protesters refused to leave the area after the rally and attempted to block Harcourt Road again. This time, however, the police authorities sent negotiators instead of riot police. Regular traffic flow at Harcourt Road was restored by 11 a.m. today, June 17. 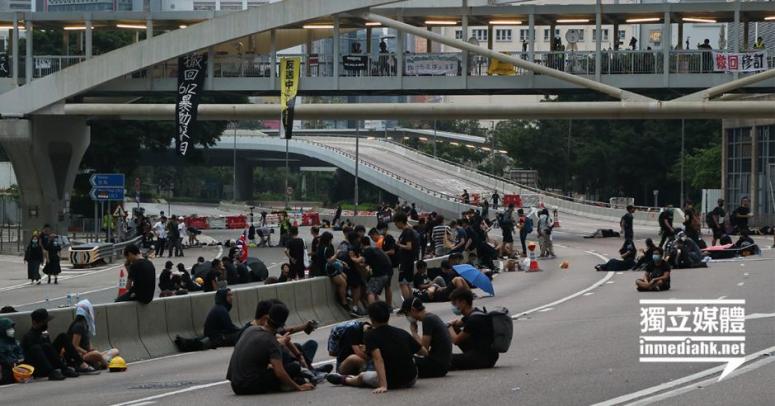 Since 2014's massive pro-democracy protests, a large number of activists in Hong Kong have been prosecuted and jailed, and six lawmakers from the pan-democratic sector have been disqualified over their use of the oath-taking ceremony for protest. As the opposition has been increasingly marginalized, the pro-Beijing political sector has come to believe they can pass controversial bills and budgets in the Legislative Council without due process and public consultation.

The controversial extradition bill, which comprises a set of amendments to the Fugitive Offenders and Mutual Legal Assistance in Criminal Matters Legislation, was introduced in February 2019. The amendments empower the Chief Executive and the local courts to handle case-by-case extradition requests from territories with no prior agreements — most notably Hong Kong and Taiwan. Lawyers, journalists, foreign politicians and businesses have expressed concern over the risk of residents being extradited to the mainland, where human rights protections are nonexistent. Despite the controversy surrounding the bill, the government administration bypassed Legislative Council Committee deliberations and scheduled the second reading of the bill for June 12.

More than one million took to the streets on June 9 calling for the bill's withdrawal, but Carrie Lam refused to give in. One week later, two million people were in the streets calling for her resignation. The world was watching and impressed by the persistence of Hongkongers. As journalist Melissa Chan suggested on Twitter:

The people of Hong Kong should be up for the Nobel Peace Prize. Two million protesters — orderly, recycling, giving way to ambulances as massive crowds part, giving safety hat and gear to visiting foreign correspondents — what better example of peaceful resistance in 2019?