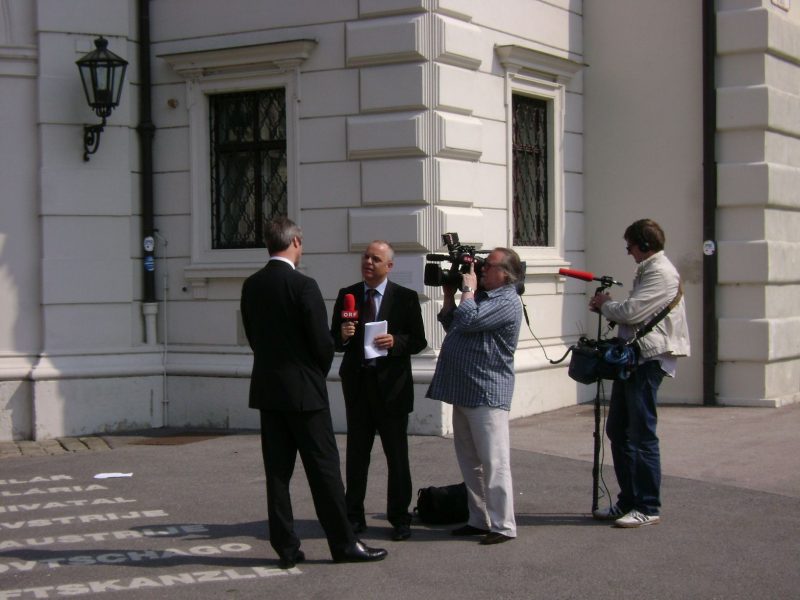 When members of the conservative Austrian People’s Party (ÖVP) and radical right Freedom Party (FPÖ) were elected into power in 2017, there was little response. There were  almost no protests, except for a few gatherings in the Austrian capital, Vienna.

The now majority right-wing populist government has since tightened asylum laws, put migration on hold, and set its sights on restricting press freedom.

Just few months after the government’s inauguration, Norbert Steger, a member of the board of trustees at the Austrian Broadcasting Corporation (ORF), accused ORF of being biased in its recent reporting on the parliamentary elections in Hungary. Steger is a former chairman of the Freedom Party and maintains close ties with its leadership.

Steger demanded that the public broadcaster take “steps towards more objective reporting” and threatened that failure to do so could result in one third of foreign correspondents losing their jobs. Steger does not have the authority to make this happen, but he does have significant (if soft) political power.

As the Freedom Party (FPÖ) keeps friendly ties with Hungarian right-wing Fidesz party, led by Viktor Orbán, one can imagine why FPÖ party members might have thought ORF’s coverage to be too critical. Steger also stated in the same interview that journalists who violate the newly drafted “Social Media Guidelines on Journalists’ Behaviour” will receive a warning but could also risk losing their jobs.

But at the time of the interview, in April 2018, ORF employees and other journalists had not even been told about the guidelines. They had been written, but not communicated to journalists or the public.

After months of tensions between FPÖ and ÖRF staff, and numerous personal attacks against journalists, the draft Social Media Guidelines were officially released in June 2018.

They immediately raised concern among many media workers. They present troubling example of how such “self-regulatory” codes of conduct can be abused by those who wish to establish stricter control over the media in the country.

Ethical guidelines are common practice in media regulatory frameworks across Europe. Their general purpose is in the name: it is to guide. ORF itself has had social media guidelines in place since 2012, which followed the example of BBC Social Media Guidance for Staff. Their general role is to articulate ethical principles for journalism and are traditionally meant to serve as as the voice of reason, underlining and protecting the professional integrity of journalism.

But the newly drafted ORF Guidelines (still yet to be approved), threaten precisely what their proponents claim to protect: independence and objectivity.

…public statements and comments in social media should be avoided, which are to be interpreted as approval, rejection or evaluation of utterances, sympathy, antipathy, criticism and ‘polemics’ towards political institutions, their representatives or members.

Every single term used in the aforementioned sentence, whether it is “antipathy” or “polemics,” is extremely vague at its core. Such vagueness could allow authorities to use these guidelines as ammunition against any critical statement aimed at the current government, no matter of how objective, balanced or well-intended the critique may be.

Second, the Guidelines ask journalists to refrain from the following:

…public statements and comments in social media that express a biased, one-sided or partisan attitude, or a support for such statements and initiatives promoted by third parties, and participation in such groups, provided that objectivity, impartiality and independence of the ORF may be compromised. The corresponding statements of opinion can be made both by direct statements and indirectly by signs of support / rejection such as likes, dislikes, recommendations, retweets or shares.

Here again, terms such as “partisan opinions” are very problematic. Would criticism of human rights violations or fact-based coverage of groups fighting climate change qualify as biased? With this wording, the chilling effect on the right to freedom of expression is inevitable, and may lead journalists to censor themselves, in order to avoid difficulties and further insecurities in their workplace.

At the same time, if the main public broadcaster in the country seeks to achieve relative neutrality — in an effort to best serve the public interest — it must  showcase a diverse range of opinions. This commitment to impartiality and neutrality is intended to prevent the misuse of media for propaganda and other forms of manipulation.

Finally, the new guidelines also employ language suggesting that they represent a mandate, rather than recommendations, as was stipulated in the original wording of the Guidelines from 2012. The June 2018 draft uses a very different tone. The document creates a shadow of hierarchy by forcing every ORF journalist to think twice before they share anything on their social media.

The primary duty of the Austrian press is to monitor and to inform whether the rule of law is intact and fully respected by the elected government. Due to its great importance in preserving democracy, the protection of the free press is enshrined within national constitutions and enforced by domestic media laws. Freedom of expression not only guarantees the rights of citizens to write or to say whatever they want, but it also protects and promotes the right of the public to access important information of consequence.

Although not legally binding document, the Guidelines still pose a real threat to democracy. The non-binding nature of the Guidelines serves as an excuse for policymakers who defend its provisions as ethical principles for journalists’ conduct and not the legal obligations per se, enforced by a state agent. But in practice, the independent and impartial work of journalists may be increasingly jeopardised, as every statement, whether in their personal or professional capacity, is subject to much stricter self-censorship in order to avoid further obstacles to their work or even an imposition of “ethical” liability for their conduct.

If the current draft is adopted as it stands, it will provide for an extra layer of strict control that aims to silence the critique and dissent.

When in 2000, FPÖ and ÖVP formed their first ruling coalition, the Austrian government was shunned by European countries and threatened with EU sanctions. But today’s atmosphere in Europe is very different. Authoritative and populist regimes openly undermining democratic governance are a new normal. Under such circumstances, human rights of all are in danger due to a widespread democratic backsliding present in the western countries as much as in the eastern corner of the EU.

Without a doubt, journalists and media outlets have a huge responsibility to impartially inform the public on these and other matters of public interest. Ethical codes of conduct can play a crucial role in journalistic work, acknowledging a great responsibility to report accurately, while avoiding prejudice or any potential harm to others.

However, when journalists’ freedom of expression is being violated, the right to receive and impart information of all of us is in danger, and so is democracy. Human rights and ethics are two different things. One cannot be misused to unjustifiably restrict the other.

Eliška Pírková is a research fellow at the Privacy and Sustainable Computing Lab in Vienna who specializes inn freedom of expression and protection of digital rights. She is originally from Slovakia.