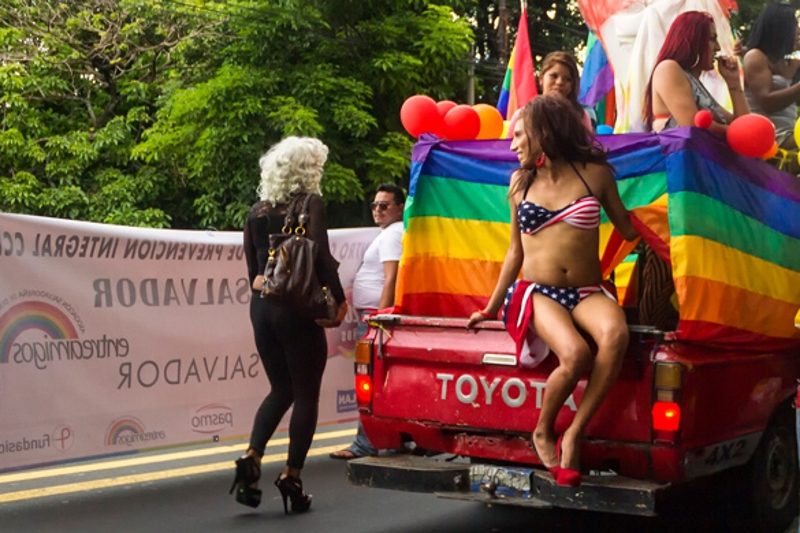 Sexual and gender minority activists parade in the streets of San Salvador during a pride march. Photo: María Cidón Kiernan, used with permission.

This article is a condensed version of a piece written by Animal Político, María Cidón, Priscila Hernández, Prometeo Lucero, Revista Factum, and W Radio México, and originally published by CONNECTAS. It is republished here as part of a content-sharing agreement.

They flee Guatemala, El Salvador and Honduras, persecuted for their gender identity. Unlike other migrants, their journey is fraught with even greater persecution and harassment. Their “American Dream” is just a place where they can exist.

Being a trans woman in El Salvador, Guatemala and Honduras is synonymous with discrimination. Living according to their gender identity means they face hate crimes that often go unpunished.

The countries of the so-called Northern Triangle in Central America have the highest rate of violence against transgender people in Latin America. From January 2008 to December 2016, the organization Transgender Europe recorded crimes against 159 trans people in the region: Honduras tops the list with 89 crimes, followed by Guatemala with 40 and El Salvador with 30. This is just the tip of the iceberg, as many crimes go unreported.

Police and prosecutors don’t identify victims by their gender identity, only by their genitals; therefore, there are no official statistics on the murders of trans people. This is compounded by the lack of investigation, and mainly affects transgender women, who are the most vulnerable to hate crimes.

Unlike their compatriots, in the case of trans women, migration is not just about seeking new opportunities or fleeing widespread violence. It’s about finding a place in the world to live without discrimination, as demonstrated in this report.

During the northward journey through these countries, trans migrants are exposed to greater harassment, like what happened to Rafael Antonio, better known as “Eléctrica.”

She traveled from Honduras to Mexico and describes how she was harassed, from one country to another:

In Choluteca (Honduras) what is more common is gay people being raped, beaten and abused. Gang members attack us first because they want us to join them by force and I don’t think that’s fair. I said: I’m coming out of the closet, I’m going to accept myself as I am, and I'm worth a lot.

As for Mexico, Eléctrica was not treated any better. Upon entering the country on September 1, 2016, she was stabbed and assaulted in Tenosique, Tabasco. Eléctrica asked for a humanitarian visa, but it was denied. They told her that there was not enough evidence to seek asylum, despite having been stabbed. She reflects:

I think that just given the fact that I was stabbed, I should have quite a few rights, even as an immigrant.

Mema Perdomo, from El Salvador, is another example of the sacrifice these women have made to protect their lives from their own environments. In Mema's case, she even had suicidal thoughts. She says gangs are the reason she had to flee her country:

Ten years ago, I came from El Salvador. [One of] my best friends was burned alive in Usulután, gang members threw gas on her. […] I knew the perpetrators, so they threatened me. And so, full of fear and panic, I came here.

She eventually arrived in Houston, in the United States, where she lived with her sister for a while, although she still doesn’t feel at peace.

At the first border outside the Northern Triangle, in Mexico, the situation is far from what they expected. There are not enough refugee centers and discrimination is also an issue.

Daniela, for example, had to flee from Mexico City, where she was constantly harassed by her co-workers:

I was attacked in Mexico City and that’s why I decided to keep moving. I feel more welcome in Tijuana. Staying busy helps me forget about things. I forget about the bullying and the discrimination. Somewhere along the way, all of the violence you suffer makes you become violent and you’re left with no other option than to be violent when you have to be.

According to a report issued by the International Organization for Migration, after a triple murder in El Salvador, 136 lesbian, gay, bisexual, transgender and intersex (LGBTI) people, most of them trans, have fled from the country to Mexico and United States during the last years.

Thus, fleeing is a necessity and seeking asylum in Mexico or the US is the quickest way to get protection, but now even that isn't guaranteed.

The Mexican Commission for Refugee Help (COMAR in Spanish) is denying this right in a systematic and irregular way, according to organizations that support migrants. In fact, from January to September 2016, not even a third of the 752 applicants were recognized as refugees, that is, only 22.3% of the applications were accepted.

While trans women travel across Mexico in order to cross the border into the US, one of the few spaces that offers them a safe and hate-free stay is Hogar Refugio La 72 in Tenosique, Tabasco.

In contrast, trans people in Mexico City, which is considered to be one of Latin America's capitals of diversity, don't enjoy any security.

That was evident when Paola, a trans sex worker, was shot to death by a client inside his vehicle. The man was arrested and released just hours later due to a “lack of evidence.” Her friend, Kenya, along with other friends carried the coffin with Paola’s body in it from the funeral home to the busy Insurgentes Avenue and put it in the middle of the road (which runs north to south throughout Mexico City). They blocked the road for hours until the riot police arrived.

Yolanda is in charge of a shelter in Tijuana called the Butterfly Garden (Jardín de las Mariposas) and explains that the discrimination in these recovery centers is serious. There are 90 religious recovery centers, and none are designed specifically for the needs of trans people. She cites as an example a case in Tecate, Baja California, east of Tijuana, that Yolanda learned about from the press. A young trans person, walked out of a recovery center, and the next day was found dead, burnt in a hole.

Perla Hernández runs the Sacred Heart House for Deportees (Casa del Deportado Sagrado Corazón). Since 2012, it has welcomed deportees who roam the border and homeless people alike. Up to 40 people can fit snugly in the house. Perla is trans, and on Saturdays and Sundays she works taking blood pressure.

The lack of access to health services, education and work means that many transgender women do not feel worthy of having rights or are unsure, according to Rubí Juárez, who heads the Comprehensive Care Center for Trans People and who conducted a census of the women in the prostitution and bar area of Tijuana.

Transgender migrant women who were denied refuge in Mexico continue their journey to the US, where they’ll seek asylum from authorities. The process is slow and can take years in which people's lives are caught in limbo between adapting to a new country and the fear of being deported back to the place from which they fled.

In the US, immigration policies are becoming more and more stringent. Just since 2012, pending asylum applications from citizens of Mexico and the Northern Triangle countries have increased five-fold.

Although the US has recognized LGBTI people as persecuted minorities since 1994, it has so far been unable to record the number of asylum cases based on sexual orientation or gender identity.

The Center for American Action Fund has attempted to fill this statistical void by drawing from the cases handled by the organizations Immigration Equality and Human Rights First.

Asylums granted to trans people from Mexico and other Central American countries went from being only two cases in 2010 to a total of 23 in 2016. Three out of every 10 cases come from these countries, but it’s only a small portion of the population that requires this protection or that can request it. Many remain in an undocumented situation fearing deportation.

You can read Connectas’ full report “No Country for Trans People” in Spanish here.