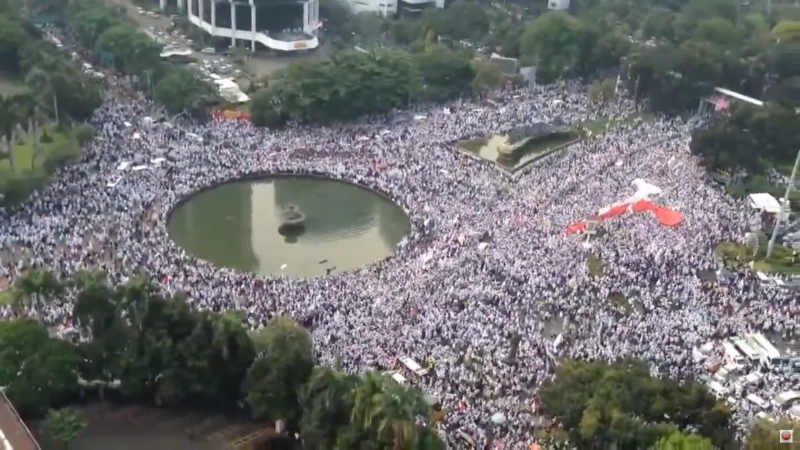 An estimated 200,000 joined a protest calling for the ouster of Jakarta's governor, who is accused of insulting Islam. Image: YouTube

Earlier this month, on Nov. 4, an estimated 200,000 people in Indonesia — the world's most populous Muslim-majority nation — joined a protest in front of the presidential palace calling for the ouster of Jakarta Governor Basuki Tjahaja Purnama (popularly known as “Ahok”), whom hardline Muslim leaders accuse of committing blasphemy.

The rally, organized by the conservative Islamic Defenders Front (FPI), eventually turned violent, and many have since compared the unrest to riots that rocked Jakarta, the country’s capital, in 1998.

Ahok is a Chinese Christian politician who allegedly insulted Islam by citing some passages from the Quran about electing non-Muslims. Ahok’s speech citing the holy Muslim text was recorded on video, which later transcribed with an error that outraged Muslims and used by his opponents against him.

Moderate Islamic clerics from the Nadhlatul Ulama (Indonesia's largest Islamic organization), Muhammadiyah (Indonesia's second largest Islamic organization), and the Grand Imam of Istiqlal Jakarta Mosque (the largest mosque in Southeast Asia) have stated publicly that Ahok didn't insult Islam, in their view, but fundamentalist clerics insist that the governor is guilty of blasphemy, demanding his removal from office by holding a massive protest on Nov. 4.

Indeed, thousands joined the protest in defense of Islam, but some analysts have noted that the rally also attracted the support of thousands more who were evicted from their homes because of Ahok’s aggressive demolition campaign against slum dwellers. Aside from this, Ahok is also known to be the first high-ranking official who formally asked the Home Affairs Ministry to ban the activities of the FPI.

Weeks before the protest, racist messages directed against Ahok circulated online and offline. For example, the pamphlet below asks readers if they would support Ahok's assassination.

#peaceprotest411 was an empty promise. Speeches, banners, posters filled with hate and violence are circulating.

Extremist groups like Syrian jihadists have reportedly encouraged followers to punish Ahok and by “igniting” a holy war in Indonesia.

The protest, which was held primarily in the city center, reached the residential areas in the northern part of Jakarta, where Ahok lives. Public facilities were destroyed and corner shops looted, spreading fear among locals, and triggering #safetycheckjakarta on Twitter (for the second time this year, after the Jakarta bombing attack in January). The violence compares to riots in 1998, when an angry mob looted and burned down many Chinese-Indonesian shops.

As the protest slowly dispersed, Indonesian President Joko Widodo expressed regret about the violence and condemned the “political actors” who he says exploited the situation to spread chaos. The president subsequently ordered the military not to tolerate further acts of provocation that could divide the nation.

The fact is that today's protest was not to defend our religion. Just listen to what they demanded. They want Jokowi to step down.

There is also speculation that the protest was meant to discredit Ahok, who is currently leading in the surveys ahead of local elections in Jakarta, set for next year.

Indonesian Islamic Scholar Sumanto Al Qurtuby, who is based in Saudi Arabia, questioned the motives of the rally organizers in a Facebook post that soon went viral:

You claimed it was a “constitutional jihad” to defend the country, but you've disgraced the nation's foundations and constitution. You ignored the legal procedures, legal manners, and processes.

You claimed that it was jihad to defend Islam, yet you disgrace Islamic norms and ethics. You ignored Islamic morals and moralities. Your actions were rabid, as if possessed by evil, and your foul words are clear evidence that you weren't defending Islam.