A protest song was played instead of China's national anthem 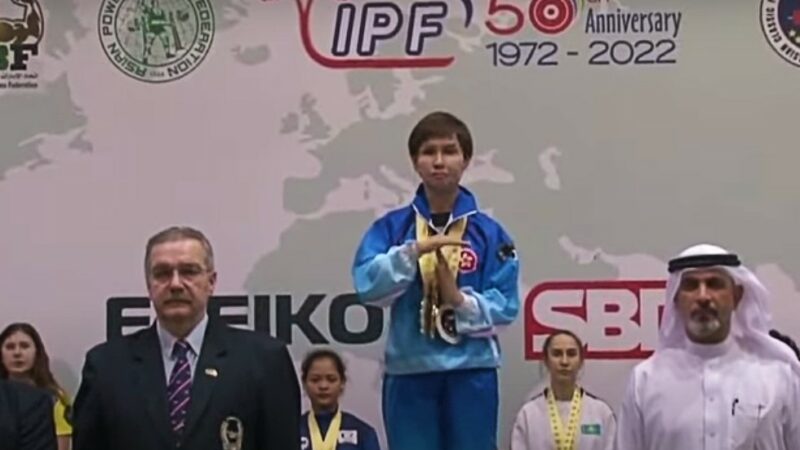 Susanna Lin made the “time out” gesture as Glory to Hong Kong was played during the prize-giving ceremony at the Asian Classic Powerlifting Championship in Dubai on December 3, 2022. Screen shot from TVB News’ Youtube channel.

Hong Kong security chief Chris Tang has claimed that Google’s search results for the city’s national anthem “hurt the feelings of Hong Kong people,” as he vowed to ensure the tech giant displays China’s March of the Volunteers in its results.

It follows a weeks-long saga in which the 2019 pro-democracy protest song Glory to Hong Kong was mistakenly played at several sporting finales, most recently in November 2022, instead of the Chinese anthem, potentially due to event staff Googling “Hong Kong national anthem.”

When HKFP searched for the phrase in English using incognito browsing mode on Monday, December 12, the top result was the Wikipedia page for Glory to Hong Kong, which the government says is associated with the demonstrations and pro-Hong Kong independent movements in 2019.

In 2019, more than a million Hong Kong residents rallied against the amendment of the city's extradition bill, which facilitates the extradition of fugitives to mainland China. The peaceful protests escalated into violent confrontations with the riot police and then chaos as the government refused to withdraw the bill.

According to Tang, Google said its search engine's results were generated by an algorithm with no human intervention:

We have approached Google to request that they put the correct national anthem at the top of their search results, but unfortunately, Google refused We felt great regret, and this has hurt the feelings of Hong Kong people.

Tang said that Google is responsible for the result because their paid advertising services allow specific results to appear in prominent places if someone is funding it. He added that Google faced a European Union legal ruling this month requiring it to remove incorrect search results from its site.

He said that the government would “take every measure” to ensure the results are corrected.

On November 13, the protest song “Glory to Hong Kong” was heard at South Korea’s Rugby Sevens instead of China's national anthem, “March of the Volunteers.”

The mistake prompted a police probe and demands for an investigation, as the Asia Rugby President Qais Abdulla Al Dhalai flew to Hong Kong to apologize. Organizers had reportedly downloaded the top song listed when searching online for the “Hong Kong national anthem.”

Instances of Glory to Hong Kong being twice mislabelled as the “national anthem of Hong Kong” in televised footage at other rugby events emerged in the days that followed.

The latest case involved the Asian Classic Powerlifting Championship in Dubai on December 3, when local gold medallist Susanna Lin made the “time out” gesture as Glory to Hong Kong was played during the prize-giving ceremony. After earlier mishaps, the authorities issued guidelines to sporting bodies insisting that athletes should halt the proceedings if they hear the incorrect anthem.

A Hong Kong sports official rejected an apology from organizers, and the Organized Crime and Triad Bureau launched a probe.

Last month, the government asked a search engine to pin the correct information about the national anthem at the top of their search results. Local media reported that the search engine in question was Google.

The government has said the song is “closely associated with violent protests and the ‘independence’ movement in 2019.” Though the protests attracted a handful of pro-independence activists, it was not one of the movement’s demands.

A 42-year-old was arrested for “sedition” on November 23 for sharing a video of the anthem blunder with supportive messages of thanks — he was denied bail.

The authorities have refused to say if the song is unlawful, though it is banned in schools, and police have intervened when it is played in public.

A further sign of attempts by #HKSAR to extend the “Great Firewall” to #HongKong & pressure internet providers to become unofficial censors. Credit to @Google for standing up against the #HK police & refusing to change its search results. https://t.co/XiWJL2ICq0