His killing has been classified as a homicide, not a crime against journalists 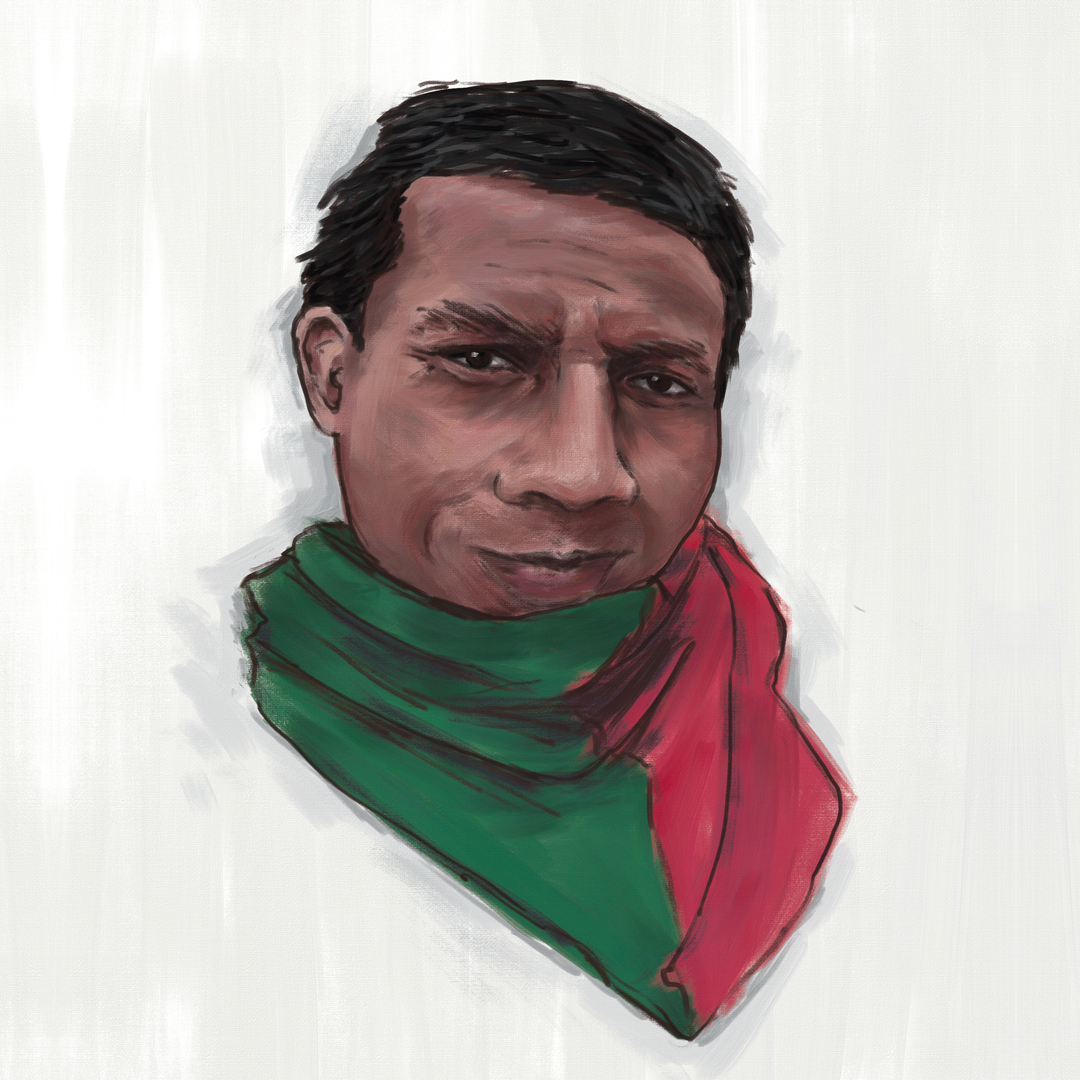 Editor’s note: this profile is the last one of wider coverage of threats against Indigenous reporters in Cauca (Colombia).

The murder of José Abelardo Liz, an Indigenous reporter and Indigenous guard, is still remembered in the heart of his native community, the Nasa people. For members of his community, he helped protect his ancestral land in Corinto, Cauca, in southern Colombia, a region ravaged by Colombia's armed conflict. His killing has been classified as a homicide and not as a crime against journalists by Colombian authorities. 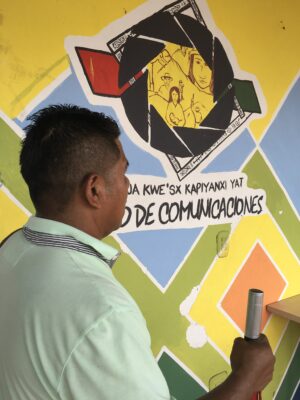 A few years ago, Abelardo joined the Nasa radio station where he took several trainings to be part of a generation of Indigenous communicators at the Corinto reserve. Wilmar Mosquera and Natalia Salazar remember his great attitude towards work.

On August 13, 2020, his colleague Wilmar asked him to report about a minga, a community-led collective action defending social causes, to free Mother Earth, and how Colombia's anti-riot unit (Esmad, for its acronym in Spanish) was responding to the community.

According to the Indigenous Regional Council of Cauca, an association of Indigenous authorities (Cric, for its acronym in Spanish), “Mother Earth liberation” is, among other things, a spiritual mandate aiming to protect the land from social actors that create disharmony, such as the guerrilla, paramilitaries, public force agents, mono-crop farmers, and so forth.

In Corinto, activities to free Mother Earth started six years ago, ancestral authority Nicolás Guerrero told Global Voices. Since then, six Nasa people were killed, including Abelardo. Other Nasa people are threatened because they do not allow illegal actors to control ancestral land that had been taken from their ancestors. Defending Mother Earth may come at a high price. 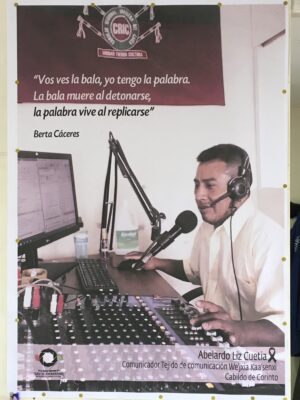 Abelardo was shot while recording his community defending ancestral Indigenous land. When his friend Wilmar received a message telling of Abelardo's injury, he first thought it was nothing serious and believed they could joke about it later.

However, once he reached Abelardo, Wilmar saw fear in his eyes as Abelardo said: “Please don't let me die!” Community members asked for help, but police members and the Esmad blocked traffic. A similar issue happened with the killing of another Indigenous reporter Efigenia Vásquez.

Thirty minutes later, a car took Abelardo to a hospital in Cali, about two and a half hours away from Corinto. Unfortunately, it was too late. He died during the ride.

Angela Caro, a lawyer from the Foundation for Press Freedom (FLIP, for its acronym in Spanish), told Global Voices that there is no access to justice in this case. She says that Colombia’s Attorney General is “sentencing” this case to impunity because the investigation did not follow the standards for crimes against journalists. Instead, it is treated as a common crime. The Attorney General did not consider Abelardo's position as a reporter.

Abelardo was committed to Indigenous communication despite the risks he faced informing his community. Indigenous reporters like him are convinced of the importance of communication produced from the land they want to set free.

Indigenous reporters are critical for Indigenous peoples and their ancestral authorities acknowledge this. Nicolás Guerrero said:

They allow a permanent communication with the community and make visible the processes we carry out as an organization. They reach out to the territories, to the community members while they work and inform them about what the authorities are doing, so that they arrive informed when they attend an assembly.

Abelardo was also an Indigenous guard who protected the land without weapons. For his community members, he was always involved with his territory and defending people’s rights. He was a not very tall man but had a big heart, whose humility was appreciated by his community.

Abelardo's voice was silenced, but his memory is alive among his colleagues. 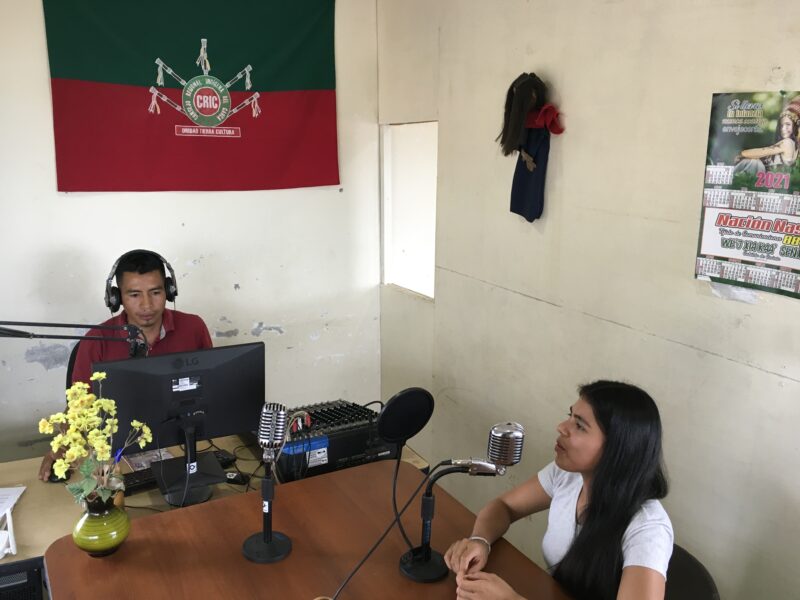 Natalia Salazar and Wilmar at the Nasa radio station. Photo by Willian Mavisoy, used with permission.

As young people who like communication, we do it out of passion. It comes naturally to us. We are not afraid. We are aware of what can happen, and the community is aware of what we do. 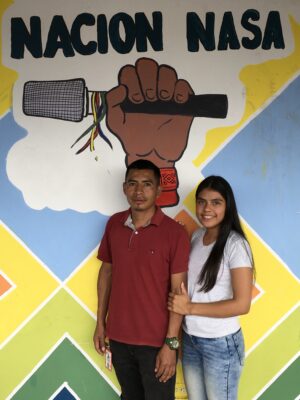 Natalia Salazar and Wilmar at the radio station in Corinto (Cauca). Photo  by Willian Mavisoy, used with permission.

Natalia Salazar, another colleague, expressed that leaving this job is not an option. She emphasized the need to have Indigenous communication in order to confront journalistic narratives from external media that misinform about their people.

“They do not know what happens in our communities nor do they know that we do our own communication work. It is important to express within our own communication channels, through the radio station, what is really happening, the voices of the communities that live in midst of disharmony, armed conflict and violence [committed] by other entities. It is worthwhile to strengthen our own and alternative communication, to continue creating these links between other communities and peoples to make known what is happening in ancestral territories, to confront and mitigate the impact of the war.

This is the last one of five stories about crimes against journalists in Colombia, especially Indigenous reporters in Cauca province, supported by Justice for Journalists Foundation (JFJ), a London-based non-governmental organization. JFJ funds journalistic investigations into violent crimes against media workers and helps professionals and citizen journalists to mitigate their risks.