The untold story of a young Colombian Indigenous reporter, guardian and hairdresser

Bullets silenced the voice of a Nasa Indigenous man 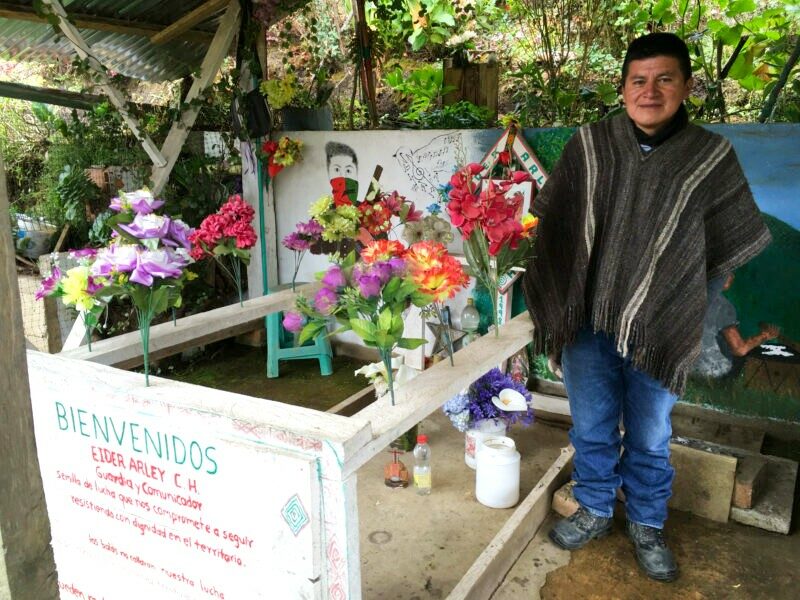 Floresmiro Campo at the grave of his son near the family house. Photo by Willian Jairo Mavisoy, used with permission.

Editor's note: this profile is part of wider coverage of threats against Indigenous reporters in Cauca (Colombia). The first story covers impunity regarding crimes against reporters, and the second, the context of Indigenous’ fight to report on community land struggles; the third, the legacy of María Efigenia Vásquez at Kokonuco reserve.

A large fence protects the remains of Eider Arley Campo Hurtado next to the family home, where his laughter once echoed in the house. A photo of him, multicolored flowers and a message in his memory mark the resting place where his father kept him.

Eider's father “planted” his son's body, as Indigenous people call the act of dying and returning to Mother Earth, on March 5, 2018. His son had become one more Indigenous communicator killed on their land. He had not reached 22 years of age.

Eider Arley Campo Hurtado was a member of the Nasa Indigenous guard and the Indigenous intercultural radio station of the Pioyá reserve. He also dabbled in music and was a hairdresser. In Colombia, Indigenous guards are unarmed Indigenous men, women, and children who monitor and protect their ancestral lands in coordination with their traditional authorities and communities.

The Pioyá Reserve is located in the ancestral territory of Sath Tama Kiwe. As the Nasa people write in a press release, liberating the land from large landowners and now the multinationals is paramount and therefore they risk their lives in its defense.

A man, who was allegedly involved with FARC-related illegal activities in the region, had escaped the local town hall of the reserve where he was detained. Informed by the local radio, and as members of the local guard, Eider's father, Floresmiro Campo, and himself tried to re-capture the fugitive and those who helped him. Eider took a different route with some of his friends, while Floresmiro patrolled in a different area.

Floresmiro told Global Voices that he had heard a gunshot and listened to someone on the walkie-talkie saying that a person was injured. When Floresmiro asked who it was, the voice on the radio said: “Chico.” His heart rate jumped since this was the nickname of his son. However, he thought it could be another person. So he insisted. “Which Chico?” They replied, “the hairdresser.” At this point, he knew the victim was his son. He went to the place where Eider was shot and killed.

A few hours later, Nasa community members captured the fugitive and his accomplices. The price paid was high: a life had been taken. A life full of energy, an Indigenous unarmed guard protecting the land, a hairdresser, and an Indigenous communicator was silenced forever.

After Eider's murder, the Attorney General Office published a press release informing that eight alleged FARC dissidents were captured. They were condemned according to Indigenous law, and sentenced by the community between 20 to 40 years in prison at the San Isidro Penitentiary in Popayán, located three and a half hours away from the reserve.

The person who killed Eider asked for forgiveness, but Eider's father rejected his request. The condemnation did not alleviate release his pain, even though he believes they must pay for what they did. 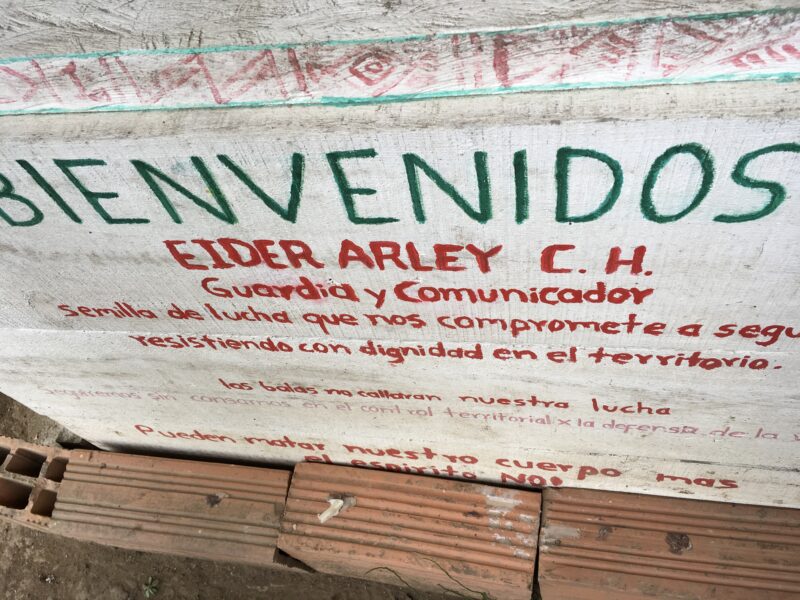 A message in memory of Eider Arley, a reporter and indigenous guard at Pioyá reserve. Photo by Willian Jairo Mavisoy, used with permission.

The bullets silenced the voice of a Nasa Indigenous man who had fallen in love with the radio station at the heart of his reserve. He first started going a couple of hours a day, and later joined the team of Indigenous communicators.

The radio station was created for two needs: faster communication within the community, which lacks phone signals, and exercising territorial control by informing about strange and illegal activities within the reserve.

The radio station also helps keep Nasa culture alive thanks to content produced in their own language, Nasa Yuwe, as Iván Campo, a member of the radio, explained.

Having their own communication channels is critical for the Indigenous people of Colombia's Cauca region. These channels are made by them and for them, respect their traditions, pursue the goal of “freeing Mother Earth” from external actors who dispute the land for legal and illegal businesses, and aim to recover harmony in 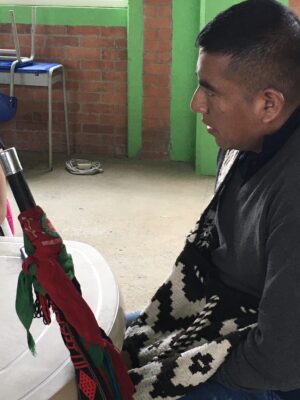 By helping to recapture a man who had broken the equilibrium of the land through illegal activities, Eider was killed. Defending their land from illegal actors such as drug traffickers, paramilitaries and the guerrilla is risky not just for Indigenous reporters, but also for ancestral authorities such as Sandra Peña, who was killed in April 2021.

Jorge Campo, the current governor of the reserve and ancestral authority, said that extortions and thefts are increasing while Nasa people peacefully resist the growing illegal crops of coca and cannabis.

In spite of the risks, Nasa people will continue to defend Mother Earth through Indigenous communication, Indigenous guardianship, and culture before those who harm their traditional land.

* This is the fourth of five stories about crimes against journalists in Colombia, especially Indigenous reporters in Cauca province, supported by Justice for Journalists Foundation (JFJ), a London-based non-governmental organization. JFJ funds journalistic investigations into violent crimes against media workers and helps professional and citizen journalists to mitigate their risks.