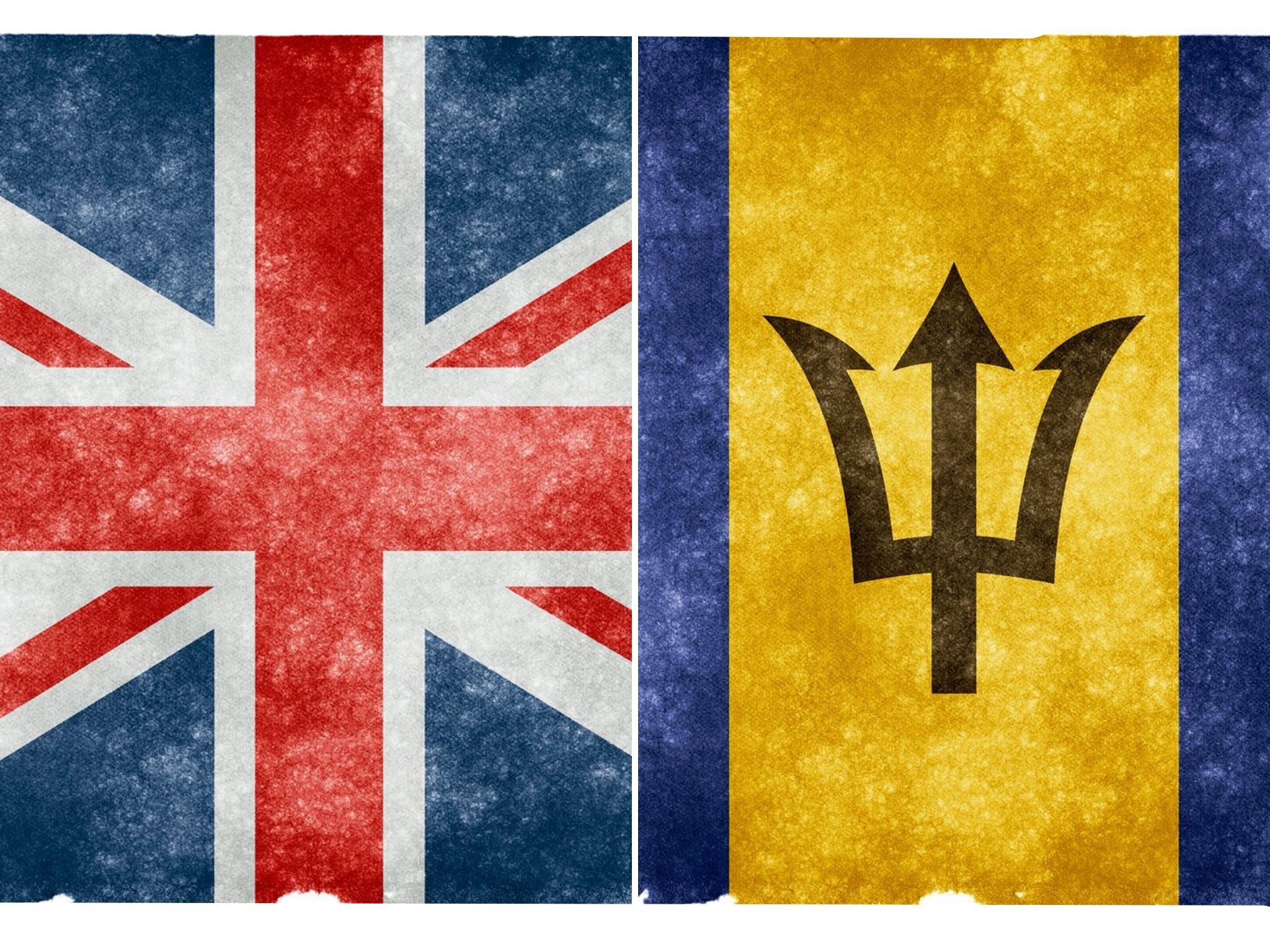 Barbados and UK grunge flag images by Nicolas Raymond on Flickr, CC BY 2.0.

November 30 has long been marked as Independence Day in Barbados, but the 2021 celebrations will forever have special resonance, as it is the day the Caribbean island nation finally replaced the monarch of the United Kingdom and the Commonwealth, as its head of state.

The Royal Standard lowered for the last time in Barbados, folded up, ready to be given back to the British Crown. All to the familiar tune of “Auld Lang Syne”. #barbados #republic pic.twitter.com/QIgzzETXsN

In September 2020, Dame Mason had stressed that becoming a republic was a necessary step in Barbados’ journey to self-autonomy:

The time has come to fully leave our colonial past behind. Barbadians want a Barbadian head of state. This is the ultimate statement of confidence in who we are and what we are capable of achieving.

Barbados’ former colonial masters appear genuinely happy for the country: the queen sent her congratulations, and Prince Charles, who enjoys a good working relationship with Prime Minister Mia Mottley, was in attendance at the ceremony:

Congratulations ? to the people of #Barbados ?? for becoming #Republic and removing #British ?? Queen Elizabeth ii as the head of the state after 400 years of colonial rule.

Prince Charles joins the inauguration of President elect Sandra Mason who will be new head of state. pic.twitter.com/ipWRieREXN

For some, like local columnist Suleiman Bulbulia who wrote this piece for the UK Guardian, the move was a “seminal” one, at last representing the opportunity for the island to cast off the moniker of “Little England.”

For Prime Minister Mottley, though, it was as simple as understanding that “the president of Barbados is now someone that any Barbadian child can aspire to be—and that's so powerful”:

As #Barbados prepares to become a #republic, I spoke to @miaamormottley to find out what the transition means for the country. We’ll have lots more coverage on @BBCNews & @BBCWorld pic.twitter.com/pucTaPDMna

As if in an effort to announce itself to the world and highlight what Barbadians are capable of accomplishing, star power was on full display with the attendance of pop icon Rihanna, who was bestowed with the title of National Hero:

Amid the pomp & ceremony, @rihanna has just been made a “National Hero of Barbados” #barbados #republic pic.twitter.com/fQ6OpInJdH

Welcome to the Republic of Barbados, after more than 200 years of slavery and 55 years of independence Dame Sandra Mason is now our President and Head of State. #Barbados #Republic #Independence pic.twitter.com/FRY05lwhjV

Some, however, made the point that it was a natural—and long overdue—progression:

I remain amazed at why our move to become a #republic is attracting this much fascination internationally. It is nothing more than the logical conclusion of our decolonisation process and frankly a move that should have happened at independence. #Barbados https://t.co/S4R3YPxGlY

According to poet Winston Farrell, who read at the ceremony, “Some have grown up stupid under the Union Jack, lost in the castle of their skin.” On November 30, 2021, Barbadians declared themselves free.