The country continues to make bold moves towards self-determination 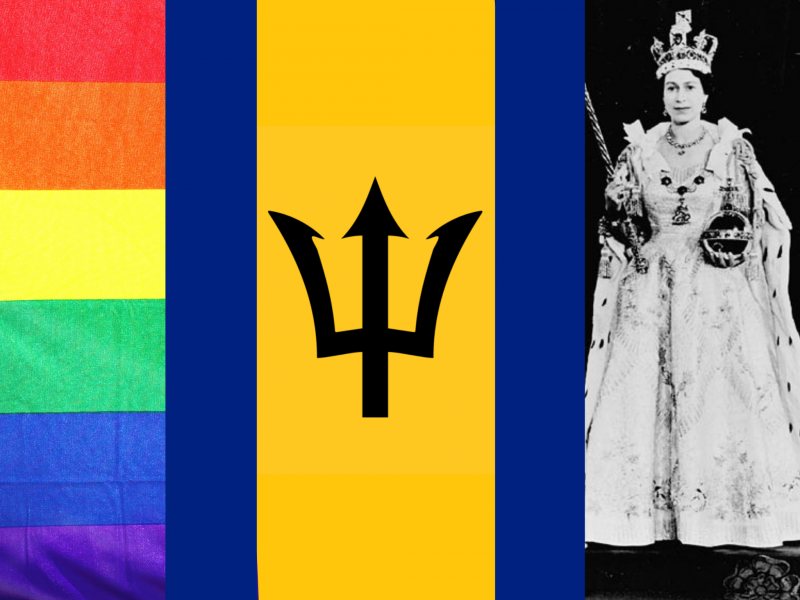 Composite image created using screenshots of elements of a public domain image of the Barbados flag by Cezary Biele on Wikimedia Commons, and from an image of H.M. Queen Elizabeth II wearing her Coronation robes and regalia by BiblioArchives / LibraryArchives on Flickr, CC BY 2.0, with changes being made to the photo via its appearance in the composite image.

Under the leadership of Prime Minister Mia Mottley, Barbados has been garnering the reputation of being one of the most progressive Caribbean nations.

Mottley's administration has spoken out on behalf of the region on the issue of climate change and its effects on Small Island Developing States (SIDS), pledged to make the country's education system more relevant and equitable, and  — given the economic hit that the tourism-dependent island is taking as a result of the COVID-19 pandemic — introduced a visa programme through which remote employees can live in and work from Barbados for up to a year.

Now, Barbados may well be poised to become the first Caribbean Community (CARICOM) member state to recognise same-sex civil unions. The Cayman Islands, which is an associate member of the community, enacted legislation making same-sex civil partnerships legal on September 4, 2020.

The island nation also plans to terminate its status as a Commonwealth realm, whereby the head of the British monarchy also functions as the sovereign country's head of state.

Saying it was “time to end discrimination in all forms,” Barbados’ Governor General Dame Sandra Mason announced the news at the opening of the country's new parliamentary term on September 15.

While the country will recognise same-sex civil unions, Dame Sandra said the matter of same-sex marriage would be put to a public referendum and that the government would “accept and be guided by the vote of the public”:

My government will do the right thing, understanding that this too will attract controversy. Equally, it is our hope that with the passage of time, the changes we now propose will be part of the fabric of our country’s record of law, human rights and social justice.

Barbados is typically a conservative society, but the governor-general noted that other pieces of legislation — considered controversial at the time — were successfully passed because it was the right thing to do. The examples she used include giving women the right to vote, ensuring that secondary education was free to all nationals, and ending risky backstreet abortions through the country's Medical Termination of Pregnancy Act.

Nevertheless, Barbadians like artist Annalee Davis got the impression that the move has mostly been prompted by economic factors and pressure from the international community. The island has increasingly found its human rights record rated below par because of its attitude to homosexuality and same-sex relationships, which has a negative effect on funding and other foreign investment. Regardless of the motivation, however, Davis felt it was still something to be celebrated.

It remains to be seen how public opinion will go on this issue once the referendum takes place, but many are expecting religious bodies to speak out against it. An opposition senator has already accused the government of trying to “sneak through” the legislation, which he said “[doesn't] speak to the morals of this country,” and on Instagram, a commenter suggested the move was about “going after the gay tourist dollar.” Back in January, one Barbados bishop made it clear that the Anglican church — not just in Barbados, but region-wide — would not bless same-sex unions.

This, despite the fact that the courts of several regional territories have handed down judgments that the criminalisation of sodomy — still on the law books in many Caribbean countries including Barbados — is unconstitutional.

‘Time to leave colonial past behind’

Another critical matter on which the country is pivoting involves removing Queen Elizabeth II as head of state. A former British colony, Barbados achieved independence in 1966, but maintained a connection to Britain via its status as a Commonwealth realm.

As of 2020, nine CARICOM territories — Antigua and Barbuda, the Bahamas, Barbados, Belize, Grenada, Jamaica, St. Lucia, St. Kitts and Nevis, and St. Vincent and the Grenadines — still recognise the queen as head of state.

There has long been a push to remove “all vestiges of colonialism and white supremacy” from Barbadian society, and the governor-general has now put a timeline on when that will happen:

In her explanation about the decision, Dame Mason quoted Barbados’ first prime minister, Errol Barrow, who “cautioned about loitering on colonial premises” — a message she said is as relevant now as it was when the island secured its independence:

The time has come to fully leave our colonial past behind. Barbadians want a Barbadian head of state. This is the ultimate statement of confidence in who we are and what we are capable of achieving.

Once the change is made, Barbados will become a republic, which means that power is held by the citizens via their elected representatives and that a president — rather than a monarch — is head of state. This decision is not expected to be put to a referendum.

Editor's note: The headline of this post has been changed to reflect the fact that in 1966, when Barbados gained its independence from Great Britain, it became the Barbados Monarchy in constitutional terms. The Barbadian government's proposed constitutional change does not mean that it is “exiting the British monarchy”, but rather, that the monarch will no longer be the island's head of state. The move has no other implications for Barbados’ relationship with the United Kingdom.