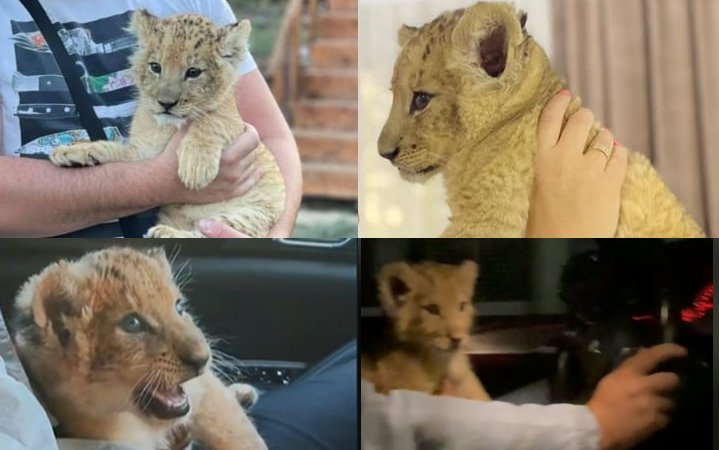 Collage of photos of “Simba” lion cub collected from social networks (and deleted by owners after whistleblower announcement). Photo by Meta.mk, CC BY-NC 2.5.

In North Macedonia, a whistle-blower and animal activist is receiving death threats after she publicly denounced a series of photos of a lion cub shared on social media, and called upon the authorities to act against animal trafficking.

On her Facebook profile, Tina Mickovska, who also works as a spokeswoman for the Skopje Zoo in the capital, wrote that she while she is concerned for her life, she won’t back down from the fight for animal rights.

Yet, despite many questions emerging about the situation around the lion cub, the Ministry of Interior (MoI) remains silent about the case the animal that can be seen on social networks riding in expensive cars and portrayed in villas and hotels. According to local legislation, the MoI should investigate how the lion cub entered the country, who and photographed it, and where, and who published it on social networks.

Photos and videos of men, women and children from North Macedonia posing with the lion cub have been appearing frequently on social networks during September of 2021.

Mickovska reposted on Facebook a few of these videos and called upon social media users to report shares and posts featuring the lion cub, noting that wildlife trafficking is strictly forbidden in North Macedonia.

She also warned that local and European laws include rigorous sanctions and multi-year prison sentences for those caught with trafficked animals.

A number of locally famous personalities from Skopje, including the owner of a luxury hotel in Skopje, had their photos taken with a lion cub. Also, there are obviously other lion cubs in Kumanovo, this is not the only one.

Sloboden pečat newspaper published allegations by their anonymous sources that lion cubs have been offered for sale during previous weeks.

I saw the lion cub in Kosovo, in Gjilan, in the Maja e Zezë Resort, which has another, adult lion. The owner of the restaurant allowed me to take the cub for a ride.

However, in a telephone conversation with Meta.mk, the staff of the resort in Kosovo refuted the claim that there is a lion cub in the resort.

“We still take care of the adult lion that has been with us for years and will stay here until the institutions find an adequate solution for him, but we do not have a little lion,” the staff from the Maja e Zezë Resort claimed.

A woman from Kumanovo, a city in the north of the country, who wrote on her Facebook profile that she works at the Ministry of Culture, published photos of herself holding and caressing a lion cub on September 26. The photos, which also showed children, were deleted from the social network immediately before the Meta.mk article was published.

Owners of other profiles showing similar photos have also removed them, or made their whole Instagram, Facebook or TikTok profiles private after the scandal broke out.  Animal rights association Anima Mundi had published anonymized copies of some of them on their Facebook page to raise awareness.

Cross-border problem in the Balkans

Trafficking wild animals in is not an unknown phenomenon for the institutions of North Macedonia.

Responding to Meta.mk enquiries, the Customs Administration states that the customs personnel has repeatedly  prevented the smuggling of exotic animals by confiscating them as they are illegally transported into North  Macedonia. Charges have been pressed against the perpetrators and the animals have been accommodated in a zoo where the animals can get adequate care.

Officials explain that the procedure behind the import of such exotic animal is not simple: it is necessary to have a permit for importing endangered wild animals and plants (CITES)  from the Ministry of Environment and Physical Planning, and an approval from a veterinary inspector at the border crossing.

One well-known case of smuggling in the region is of the lion Johnny, who was smuggled from Albania to Kosovo in 2019 and remains caged in the Maja e Zezë Resort. In February 2020, the Rapporteur of the European Parliament Foreign Affairs Committee for Kosovo, Viola von Cramon asked the transfer of the lion from the Kosovo restaurant Maja e Zezë to be conducted as soon as possible.

🦁A lion has been held illegally in a small cage in #Kosovo. @VIERPFOTEN has arranged to move him to a sanctuary, but the ministries of Kosovo and #Albania has not authorised his transport. I urge the ministries to act immediately! my full statement here https://t.co/FhAhPJM7oG pic.twitter.com/eNAgD8RdUj

After an analysis of social media photos, the State Environmental Inspectorate inspected the five-star Hotel Park in Skopje on October 1, looking for Simba the lion cub.  In a statement for Meta.mk, inspector Pejo Kirovski who led the inquest said that the cub was not there.

We've just finished a detailed inspection and determined that there's no lion cub on hotel's premises. The intervention was based on reports alleging that the lion cub was spotted on photos made here.

In the meantime, Anima Mundi issued a demand to the authorities to act urgently and to tell the public who allowed the entry of lion cubs in North Macedonia.

Advertisements by individuals selling such animals are indeed available on online marketplaces.

By the time of closing of this article, the relevant authorities including the Ministry of Interior, the Customs Administration, as well as the State Inspectorate for Environmental Protection, have not responded to Meta.mk inquiries on how the lion cub entered the country.