The country's constitution protects 'freedom of expressions, assembly and association' 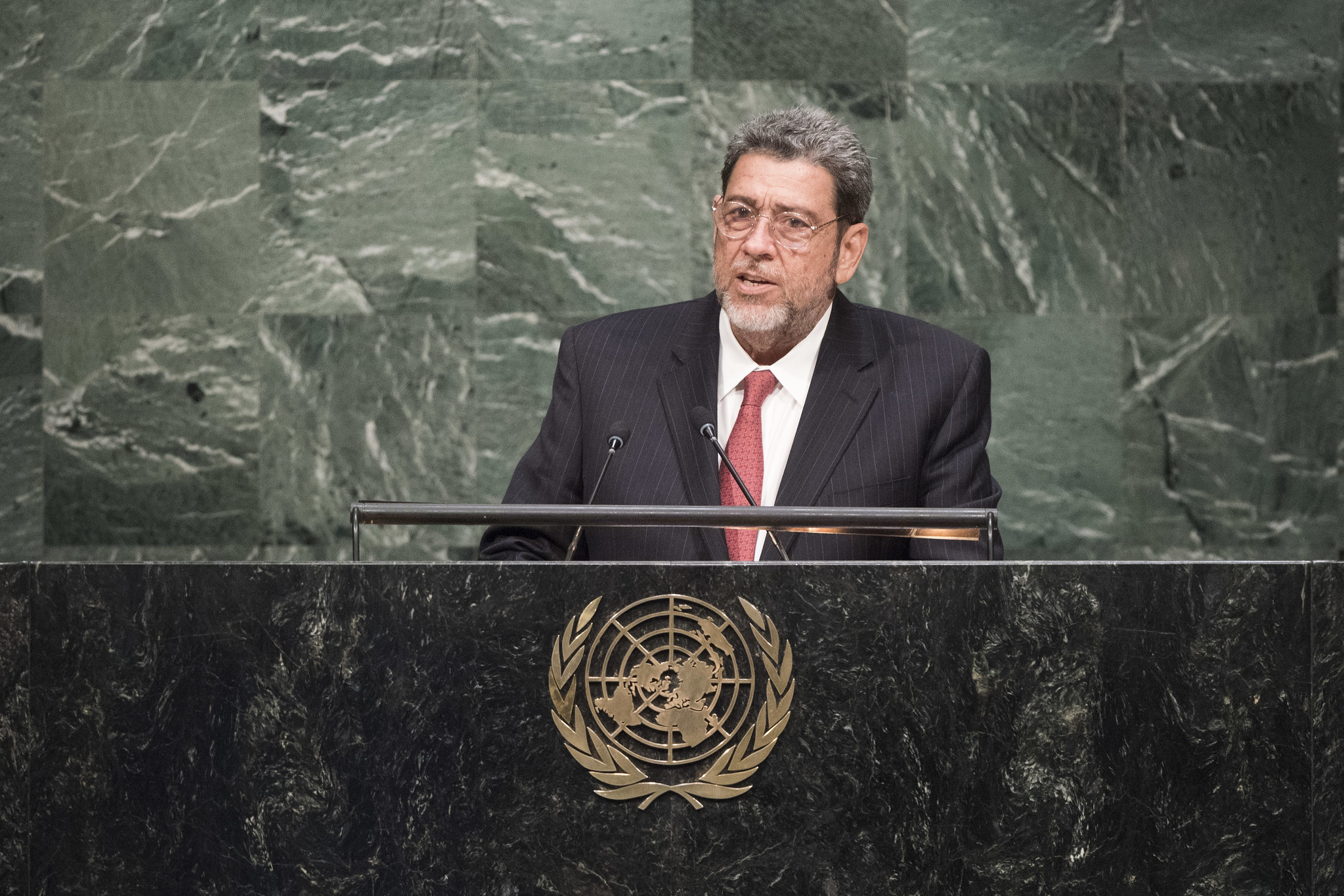 Ralph Gonsalves, Prime Minister of Saint Vincent and the Grenadines, addresses the United Nations summit for the adoption of the post-2015 development agenda on September 25, 2015. Photo by UN Photo/Mark Garten on Flickr, CC BY-NC-ND 2.0.

After St. Vincent and the Grenadines prime minister Ralph Gonsalves was hit in the head—allegedly when a protestor hurled a stone at him during an August 5 protest against making COVID-19 vaccines mandatory in the Caribbean territory—it didn't take law enforcement long to make an arrest. Annamay Lewis was charged with wounding the prime minister the weekend following the incident, at which time government minister Julian Francis warned that more arrests might be imminent.

The protest was allegedly undertaken without police permission—a requirement for public gatherings under St. Vincent and the Grenadines’ law—and the act of violence was roundly criticised, including by the country's opposition and regional voices. However, Prime Minister Gonsalves has gone on record as saying he holds opposition leader Godwin Friday personally responsible, albeit not criminally liable, for his injury.

The protest action, which was reportedly organised by the opposition New Democratic Party (NDP) and the country's public service and teachers’ unions, was prompted by the government's proposal to remove word “voluntary” before “immunisation” in the Public Health Act, as well as by concerns about the exemption process regarding the COVID-19 vaccine. The rate of fully vaccinated people in St. Vincent and the Grenadines is currently estimated to be at just over 12 per cent of the population. As at September 1, the country's health ministry reported 38 active cases of COVID-19, with 12 deaths in total.

On August 6, the day after Prime Minister Gonsalves was injured, the government pushed the public health amendments through parliament, making the COVID-19 vaccine mandatory for certain categories of frontline workers. The parameters of the new arrangements are still to be laid out by the Cabinet.

The August 13 arrests, however, of opposition activists Adriana King and Kenson King, have fanned the flame of discussion over whether or not Vincentians’ constitutional right to protest is being targeted by the authorities. The Kings were each charged with four counts of breaching the public order linked to their alleged roles in organising and participating in the public demonstration on August 5.

The country's constitution states that “every person in Saint Vincent is entitled to […] fundamental rights and freedoms” that include “freedom of conscience, of expressions and of assembly and association.”

In 2016, the government adopted controversial cybercrime legislation that the International Press Institute (IPI) and other rights organisations called “a serious threat to freedom of the press, the free flow of online information, and public debate.” The new law extended the reach of previous defamation provisions to include online expression, loosely defined as “cyber-harassment” and “cyber-bullying.”

The Kings’ legal team, led by Kay Bacchus-Baptiste, a member of the opposition NDP, took to Facebook on September 1 to alert social media users to the arrests of two further individuals: opposition radio talk show host Colin Graham, and NDP secretary-general Tyrone James. Both Graham and James were charged with the same four counts of breaching the public order as the Kings.

Calling the arrests “an abomination,” Bacchus-Baptiste said that three additional arrests would likely take place on or before September 3, adding:

It is against what the United Nations and the OAS has said about protests and upholding human rights. […] I condemn it, and I am calling on our prime minister Ralph Gonsalves, who is a lawyer, who represents St. Vincent on the UN Security Council, to come out and condemn it […] speak up for the rights of Vincentians.

The opposition has also reported alleged incidents of heavily armed, “Black Squad” police officers raiding protestors’ homes, a claim the prime minister says he has referred to his lawyers.

As at the time of publishing, Bacchus-Baptiste's post garnered close to 200 comments on the issue, with Facebook user Carla Dougan Bac commenting:

Abuse of process! These charges are frivolous and vexatious and certainly NOT in the public interest: to charge citizens for exercising their constitutional rights is ridiculous! Political victimisation is what it looks like to me!

This is human rights abuse on steroids in St. Vincent and the Grenadines. […] Nothing should stop Vincentians to peacefully and rightfully protest. It […] speaks volumes about those in power whom have now become desperate to rule by what ever means. We will never forget this dark chapter in Vincentian history.

In an exchange with Global Voices, one social media user who asked to remain anonymous out of fear of victimisation, voiced concern over “where the scenario is heading […] by treating participation in protests as a criminal act.” The same netizen claimed that some videos of the attack on the prime minister, which had been uploaded to platforms like Facebook and YouTube, had been removed, implying that there was a takedown order—something that Global Voices has been unable to confirm.

In an August 11 column entitled “The Buss Head Agenda,” Trinidad and Tobago journalist Wesley Gibbings contextualised the situation against the backdrop of what caused the protest in the first instance—the vaccination issue:

We are fresh from election campaigns in several countries. [St. Vincent and the Grenadines held its general elections in 2020.] There is the stench of both recently-shed and longstanding political blood in the air.

St Vincent and the Grenadines remains in the throes of a volcanic crisis that has decimated its agriculture, displaced hundreds, and drained the country’s treasury.

As an aside, it is unbelievable that the official opposition has resorted to a form of victim-blaming in the case of the prime minister and his injury. It betrays unfortunate denial of the slippery slope some politicians have chosen to engage.

The anonymous source, however, in a telephone interview, told Global Voices:

I am fully vaxxed, and the same way I have a right to want to be vaccinated is the same way that others have the right to choose not to be—but to have your rights trampled on for publicly expressing that opinion? That's something else entirely.