How Hong Kong lost its academic freedom in 2020

The city now ranks lower than Russia and Vietnam, according to one study on global academic freedom 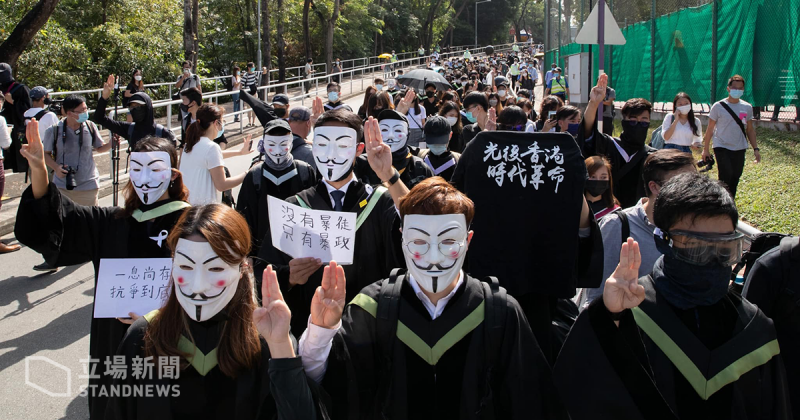 The management of the Chinese University of Hong Kong invited national security police into the campus after students chanted pro-democracy slogans during a graduation ceremony on November 19, 2020. Image from the Stand News, used with permission. 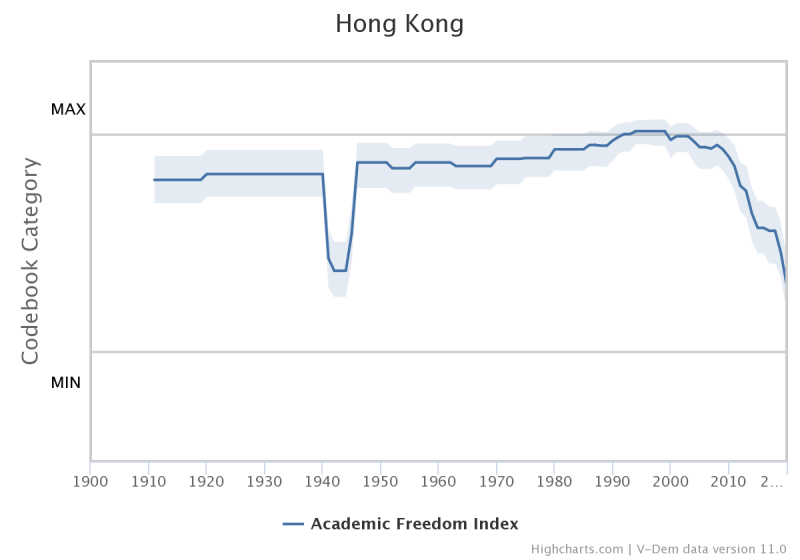 Hong Kong academic index from 1910 to 2020. Screen capture from V-dem via the Stand News.

The Academic Freedom Index scores 175 countries and territories annually and was developed by the Global Public Policy Institute in collaboration with the Friedrich-Alexander-Universität Erlangen-Nürnberg, the Scholars at Risk Network, the V‑Dem Institute, and approximately 2,000 country experts worldwide.

Upon the release of this year's ranking, Risk Network issued a statement outlining the political pressure faced by Hong Kong's higher education community since the enactment of the national security law in June 2020.

Below is a brief summary of events of 2020 are behind the decline of academic freedom in Hong Kong, according to researchers and local media reports.

Scholars Benny Tai and Claudia Mo were arrested under the national security law for organizing primary elections for pro-democracy parties in July 2020. Both were charged with “taking part in conspiracies to subvert state power.”

In 2020, several pro-democracy scholars have had their employment terminated by universities in Hong Kong. Here is an incomplete list gathered by Lokman Tsui, assistant professor of the School of Journalism and Communication at the Chinese University of Hong Kong. Tsui's tenure application was also rejected in 2020.

While in all cases there was no concrete evidence that the decisions were political, many in the public share Benny Tai's view that there is “an authority beyond the University” making the calls. Tai said:

The decision to terminate my appointment was made not by the University of Hong Kong but by an authority beyond the University through its agents. It marks the end of academic freedom in Hong Kong. Academic staff in education institutions in Hong Kong are no longer free to make controversial statements to the general public about politically or socially controversial matters. Academic institutions in Hong Kong cannot protect their members from internal and external interference.

Hong Kong's Education Minister Kevin Yeung said that public universities will have to update their syllabi to include the national security curriculum by September 2021. He added that school administrators must help “prevent and suppress” acts that could violate national security law inside campi.

According to the guidelines issued by the Education Bureau on February 4, all education institutions, from primary schools to universities, must:

(…) ensure all school staff to uphold professional ethics, abide by the law and observe the code of conduct acceptable to the society; step up the prevention and suppression of teaching or other school activities that are in breach of laws, prevent and deal with political or other illegal activities from permeating schools; and help students gain a correct understanding of the national security law.

In October 2020, the director of Hong Kong University tore down the Lennon Wall, a space maintained by students for pro-democracy posters, artworks, slogans, and commentary. The Lennon Wall is located at a site managed by the university’s student union, but the management still decided to barricade it citing “safety and management concerns.”

In November 2020, the director of the Chinese University of Hong Kong invited national security police to the campus to investigate a protest during a graduation ceremony, in which slogans such as “Hong Kong independence, the only way out” and the banned “Liberate Hong Kong, revolution of our times” were shouted. Police searched students’ dormitories and arrested nine individuals for taking part in the peaceful demonstration.

In February 2021, the administrator of the Chinese University cut ties with the newly-elected Student Union by withholding all support, including the collection of membership fees and providing venues. A statement by the school accused the student union of “exploiting the campus for political propaganda,” and added:

The University will not tolerate any behaviour on campus that may endanger national security (…) Disciplinary actions will be taken on any student who incites unlawful behaviour, which may lead to sanctions including suspension of studies or expulsion from the University.