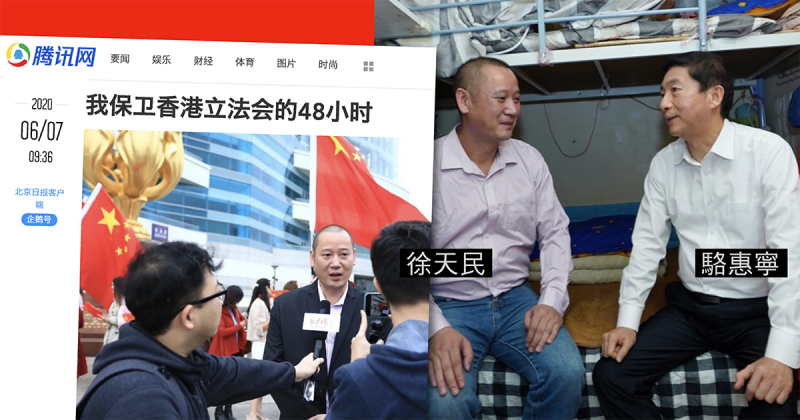 With celebrations of this year's holiday halted in the city due to COVID-19, Beijing distributed a set of packaged National Day news to Hong Kong's media outlets consisting of a muted video, a set of photos and a news story.

Luo praised Ng’s act as a testament of the connection between Hong Kong and mainland China, using the Chinese expression “blood is thicker than water.” Ng then responds by quoting Luo's own speech from September 30 that “patriotism is not a choice, but an obligation and a righteous path.”

The other interviewee was Xu Tianmin, a man who lives in an 8-square-meter apartment in the Shum Shui Po complex. Xu says in the video that, because he's unemployed, his wife and daughter have had no choice but to return to their hometown in Hunan province.

Luo then comments on how the protests and the pandemic have struck Hong Kong's economy, and proceeds to tell his staff to help Xu find a new job.

Pro-Beijing newspaper Wen Wei Po published on October 1 a separate interview with Xu, who then said he helped organize pro-China protests since June 2019, when the anti-extradition demonstrations broke out, and that he had spent about HK$ 100,000 (about US$13,000 dollars) to help clean up anti-China graffiti and posters from the streets.

While a cropped photo briefly led some to wrongfully conclude that he was a reporter from Beijing, soon it became clear that he was indeed a pro-China protester who had been interviewed by mainland Chinese and pro-Beijing media outlets in Hong Kong multiple times in the past.

@Lazyyyyyyy is among the netizens who dig into the story:

3/ It seems that Xu is indeed a Hunan native currently living in #HongKong as suggested in the Xinhua article. Xu appears to be a “patriotic” pro-police “activist”. There are plenty of photos of him participating in different anti-US and pro-government rallies. pic.twitter.com/SROPLPn45Z

On October 2, Wen Wei Po published another interview with Xu on its front page. This time, Xu said he had donated nearly one million Hong Kong dollars (US$130,000 dollars) earlier this year to mainland China for COVID-19 relief. The story stressed that Xu’s act reflected the spirit of Luo’s speech on “patriotism is not a choice, but an obligation”.

The search for Xu’s real identity has triggered a large number of comments and jokes on the Hong Kon internet. Below are some picks from various public pages on Facebook:

One actor has to take up multiple roles, the stability maintenance fund has been used up.

That kind of drama is like telephone scams, no one believes in them but they keep the show on.

Establishment supporters should learn this. Sell their apartment, donate it to the country or they can't be a patriot.