Factcheckers disproved the claims but the damage was already done 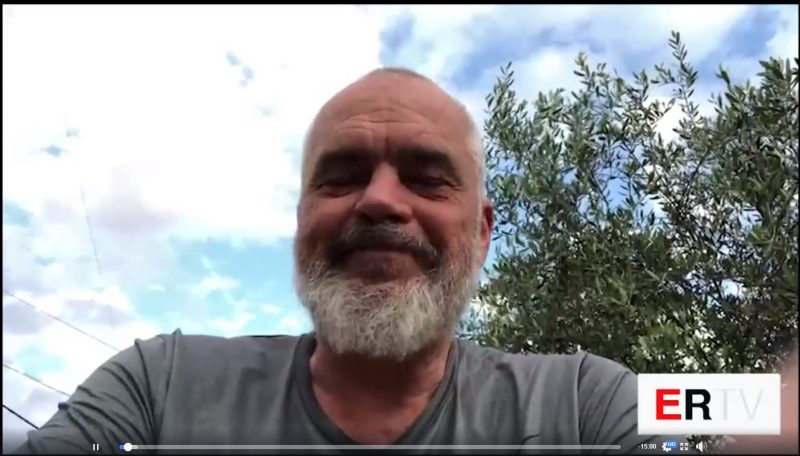 Screencap from the live video by Albanian PM Edi Rama that was misinterpreted in North Macedonia.

This story is based on reporting by Global Voices’ content partner Meta.mk News Agency, a project of Metamorphosis Foundation. Check out Global Voices’ special coverage of the global impact of COVID-19.

The answer to both these questions is “no.”

But amid the resurgence of coronavirus cases in still-shuttered North Macedonia, the tourist seasons getting underway in nearby countries have been used to manipulate public opinion with disinformation and to inflate toxic nationalism.

The falsehood of these manipulative claims — spread through media and social media — has been confirmed by fact-checking conducted by European Union-supported Critical Thinking for Mediawise Citizens, also known as the Crithink project.

By that time, the damage had already been done, however, with the disinformation helping to unnerve Macedonian citizens already distressed over the upsurge of COVID-19 cases in late May and the first half of June.

The Macedonian government's decision to keep the borders closed on the North Macedonia side during that time has been used by populist propagandists as an excuse to present the ruling party as incompetent and subservient.

These efforts have typically come at the expense of minorities in the multi-ethnic country, too.

What the Albanian PM actually said

On May 24, the Albanian Prime Minister made a Facebook live video to announce the opening of the country's borders on June 1. During the video, he also addressed ethnic Albanians from the neighboring countries, advising caution and mindfulness about COVID-19.

He said that the borders will open, but noted the beaches will be still closed for a time, and cautioned prospective visitors over the pandemic's potential “second wave.”

Starting from Monday, June 1, we will open the land borders with the neighbors. For all Albanians, no matter whether they posses passports of Albania, or of Kosovo, North Macedonia or Montenegro, we will continue to call upon all of you without pause, without exception, to be watchful. On June 1, the borders will open, but not the beaches.

Across the border in Republic of North Macedonia (RNM), some Macedonian-language media started publishing a faulty translation of the statement, creating an instant scandal. In their interpretation, he was alleged to say:

“Starting from Monday, June 1, we will open the land borders with the neighbors, namely for the [ethnic] Albanians who live in Kosovo, North Macedonia or Montenegro, but we will continue to call upon all of you to be watchful,” said Albanian president [sic – he is prime minister, not president] Edi Rama.

Ethnic Albanian public figures in North Macedonia, who are bilingual in Albanian and Macedonian languages, quickly sounded the alarm that some media and politicians were getting “lost in translation.”

Journalist Petrit Saracini pointed out that the faulty translation had changed the position of punctuation marks, making the segments about ethnic Albanians part of the preceding sentence.

Despite this, the opposition political party VMRO-DPMNE promptly issued a statement misinterpreting Rama and claiming that he invited “only the ethnic Albanians” from neighboring countries to local beaches, excluding other ethnic groups.

Macedonian nationalists tried to spin the statement as “proof” of backwardness and chauvinism among Albanians, and also as “a new defeat” and “slap in the face” for the RNM government.

One high ranking VMRO-DPMNE representative, MP Ilija Dimovski, blasted “madness straight out of the 19th century” and “discrimination on ethnic grounds against the citizens of Republic of Macedonia”.

Macedonian Foreign Minister Nikola Dimitrov and the government quickly retorted that they had not received any such information from their counterparts in Albania. 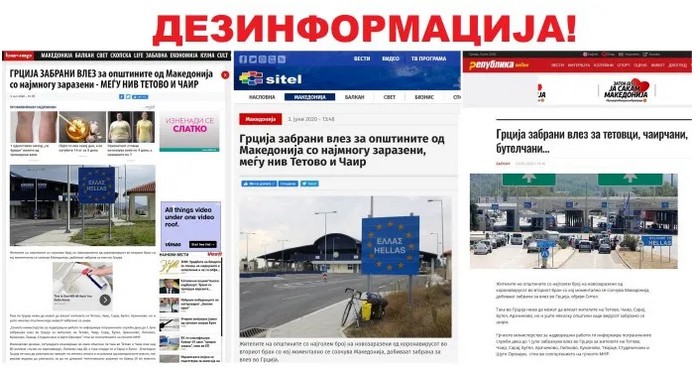 A collage presenting screenshots of several articles with the fake news about Greece and North Macedonia with a warning in red “Disinformation!”. Photo by CriThink.mk, used with permission.

Using a photo-shopped document allegedly from the Greek MFA as ‘proof,’ they alleged that Greece will prohibit the entrance of Macedonian citizens from municipalities where large parts of the population are Muslim (mostly in ethnic Albanian and ethnic Roma communities, implying that these groups are to blame for the spread of the novel coronavirus).

The Macedonian Ministry of Foreign Affairs denied the claim in a Facebook post, calling it “false news.”

When debunking the claim, CriThink noted that it would be highly unlikely for Greece to issue such travel restrictions relating only to citizens that live in certain territories, since that would be an infringement of the ETIAS agreement between North Macedonia and the European Union.

Some of the media in question removed these articles, but without issuing a retraction or apology to their readers.

Foreign beach vacations are viewed as a middle class right in the landlocked Balkan countries. Restrictions that inhibit this right, such as COVID-19 related lock-downs, have been extremely unpopular. Populist forces in the region, notably the Serbian ruling party, have tapped beach dreams for political purposes.

According to the WHO data compiled by Johns Hopkins University as of June 25, Albania has documented 2,114 COVID-19 cases, with 47 deaths, while North Macedonia listed 5,445 cases with 259 deaths. Greece had reported 3,310 infected persons and 190 deaths so far.