She opened her pendant, and there was President Vučić 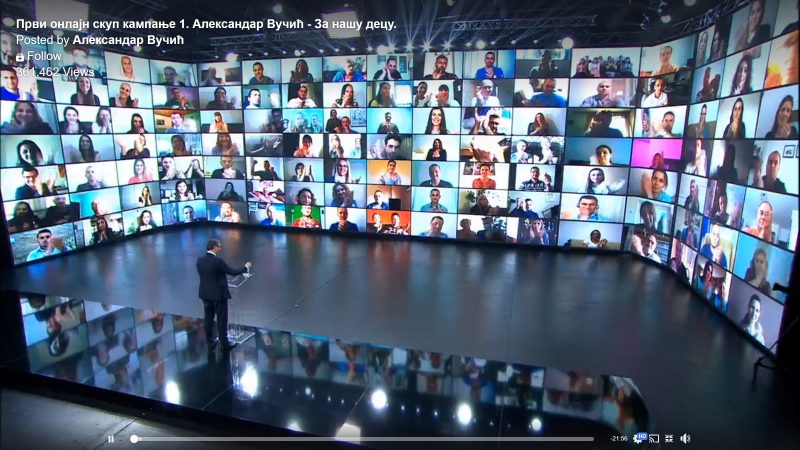 This story is based on reporting by Global Voices’ content partner Meta.mk News Agency, a project of Metamorphosis Foundation. Check out Global Voices’ special coverage of the global impact of COVID-19.

After a COVID-19-imposed hiatus, Serbia announced that it will hold its postponed parliamentary elections on June 21.

The biggest opposition parties will boycott the elections, blaming the government for failing to provide fair conditions. The ruling parties on the other hand, have started the campaign in earnest — and continued their tradition of controversial campaign ads.

Prior to the electoral announcement, the country relaxed anti-pandemic measures, which included a general lockdown.

Data provided by the country to the WHO indicates that by June 18 Serbia had recorded 12,522 confirmed cases and 257 deaths.

In a controversial move, Belgrade declared 4,000 persons who had previously tested positive to COVID-19 as ‘healed’ on June 7, reducing the offical number of active infections by about 10 times.

Epidemiologist Zoran Radovanović complained that the patients had been “written off by an act of the quill, it was an administrative decision.”

The move reduced the ratio of infected persons per 100,000 inhabitants and therefore placed Serbian citizens in a category of countries eligible for cross-border travel at regional level.

Since being able to afford a holiday in Greece is an important symbol of status in Serbia, this achievement has been presented as major win for the government.

Kicking off with a dash of dystopia

Serbian President Aleksandar Vučić, the head of the Serbian Progressive Party, a right-wing populist political party, started the campaign with an May 16 online rally while lockdown measures were still in force.

The President of Serbia just held a virtual rally with his supporters clapping via video stream. Looks very dystopian and creepy.
pic.twitter.com/3O7yuvm9r2

The event invited comparisons with characters and scenes from dystopian science fiction works, from the Big Brother in 1984 to the Architect from the Matrix.

A weekend in Greece

One of the most talked-about pre-election clips was the Serbian Progressive Party's “Weekend in Greece? Yes, it's possible!” The video was released before opening of the borders in Europe, which were closed to limit the spread of COVID-19 pandemic.

The video addressed the frustrations of people locked down due to quarantine measures while crediting Vučić for recently built stretches of highways connecting Serbia with North Macedonia and Bulgaria.

These new roads are how Serbians drive to Greece.

In the video, a Serbian family decides to take a weekend in Greece on the spur of the moment, implying both affluence and freedom of movement.

TV announcer: Another weekend with record high temperatures is ahead of us…
Mother: Oh my, we'll all drop dead!
Father: Let's go to Greece, right away!
Sons: Yes!
Mother: You are out of your mind. Such a long road trip for two days at the sea!
Father: What road trip?! Just pedal to the metal and we'll be there in four hours.
Mother: So let's go. I need twice that time to pack.
Father: The best of all is that all the way we'll travel via [modern] highway.
Mother: Ela, ela! [“Let's go” in Greek] Let's go, let's go!
Voice over: Aleksandar Vučić. For our children.
[Changed scene, indicating they've arrived a the Greek seaside.]
Father: Kalimera. [“Good day” in Greek].
Mother: Sagapo. [“I love you” in Greek, while looking at a pendant with the image of Aleksandar Vučić.]

In May, President Vučić and Serbian Minister of Foreign Affairs Ivica Dačić announced that Greece was planning to open its borders for Serbian visitors from June 15.

In fact, Greece only planned to open its borders for Serbian tourists from July 1, so Serbian tourists who actually rushed towards Greek beaches via Bulgaria got stuck at the Bulgarian-Greek border.

At one point, the line was over 15 kilometres long, and many of the blocked families flooded social media with complaints about the hellish conditions affecting children and senior travelers.

Serbian diplomats pleaded with Greece, which conceded to opening its Bulgarian border for incoming Serbian citizens ahead of schedule.

On Monday June 15, President Vučić visited the Center for Robotics and Artificial Intelligence in Education (CRVIO) in Belgrade, holding a public meeting with a humanoid robot made in China, called Ema.

They held a conversation in Serbian. Vučić stressed that under his leadership the country promotes digital education and artificial intelligence as roads to the future, and has gained 800 million euros from software exports.

Vučić asked Ema why she came to Serbia, and she replied that the country had rich traditions and that she came to improve education in Serbia with the help of modern Chinese technology.

President Vučić: Dear Ema, could you tell us why you came to Serbia?

Ema, the robot: Of course. I love Serbia. Considering the fact that I am a kind of smart technology, it is obvious why I choose to be in Serbia. It's not only because it has exceptional people, rich traditions and nature, but also because it's a country which has a bright future.

The present Serbian government cooperates deeply with China, particularly in the field of digital surveillance.

It recently purchased over 1,000 cameras with face recognition technology from the Chinese company Huawei. The cameras will be placed in 800 locations throughout the capital Belgrade.

Stage diving in the southwest

Meanwhile, the politician Rasim Ljajić made the news on June 17 by performing a rock-star style stage dive into the crowd during a rally in the southwestern city of Novi Pazar.

Ljajić, 56, currently holds the position of Deputy Prime Minister and Minister of Trade, Tourism and Telecommunications in the Government of the Republic of Serbia.

His Social Democratic Party of Serbia has been a fixture of almost all ruling coalitions in recent history.

At the rally he praised his list as the only one which has the “majority of female candidates and the only one which would win the highest number of Bosniak and Serbian voices [together], which is impossible [for others] in this day and age.”

According to Serbian Electoral Code, the country will enjoy an electoral silence starting on midnight on Thursday and ending at 21:00 hrs on Sunday. But the days are long, and there is still some time for eye-catching campaign stunts.